Be the first player to get your game piece to the finish line.

Each player chooses a color and takes the corresponding game piece and six “It Fits” tokens. Each player puts their game piece on the start space of the gameboard. Place the gameboard, score board, cards, die, and sand timer in the middle of the table.

The youngest player is the dealer for the first round.

The dealer for the current round (rotates for each round) rolls the six sided die which is used for potential bonus points at the end of the round. The dealer deals one card face down to every player and puts one card face up on each space of the gameboard. The dealer reads all of the cards on the gameboard to the other players so everyone knows the cards that are being used for the current round.

When everyone is ready the dealer flips over the timer and the round begins. Each player looks at the card that was dealt to them. The objective of the round is to think of an object, place, person, thing, etc that fits the player’s card and as many of the cards on the gameboard as possible. When a player thinks of their answer for the round they place one “It Fits” token on every card that they believe works with the answer that they came up with. When the timer runs out everyone must stop. 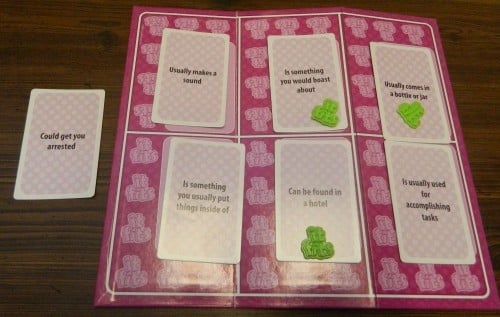 The green player’s card is “Could get you arrested”. The green player came up with the answer of “an expensive bottle of wine”. If a person drank too much they could get arrested. People could boast about owning expensive wine. Wine usually comes in a bottle. Expensive wine could also be found in a hotel.

Starting with the dealer every player tells the other players the answer that they came up with. After everyone says their answer, starting with the dealer, each player has to defend all of the cards that they felt matched their answer. If any of the players disagree with a player’s rationale for any of the cards, the issue is debated and the players vote to see whether the card should be counted or not. 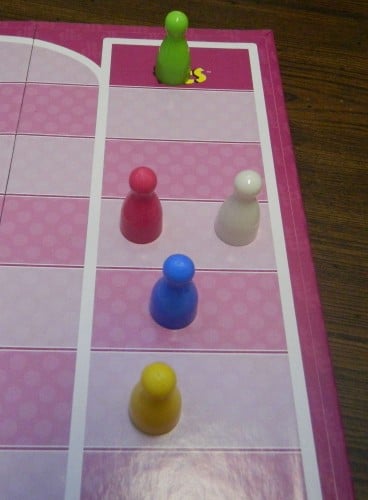 The green player has reached the finish line so they would win the game.

While I wouldn’t call it my favorite party game, I had some fun with It Fits. It Fits isn’t a brain burner but it makes you think more than your typical party game. While the game does rely on luck, there is a decent amount of skill involved in the game. The most creative players will do better in the game since they will be able to come up with answers that use more cards than the other players. Usually you will be able to use between three and five cards in a given round. Creative players could find some unique ways where an additional card or two may apply which does give them an advantage in the game. Unless all of the cards somehow work well together though, you are unlikely to be able to use all of the cards for a given round. It is much more likely that you will encounter a situation where none of the cards work well together and you end up only being able to use a couple cards.

While coming up with answers there is kind of a risk reward element to the game. For every round it should be pretty easy to come up with an answer that uses two or three of the cards. If you want to be a little riskier though you could start to stretch and use cards that only slightly pertain to an answer. You could get more points by stretching it a little but you are going to have to do a good job explaining why the cards apply to the answer and you risk losing points that you otherwise would have received.

While It Fits has a decent amount of skill to it, luck still plays a pretty big role in how well you can do in the game. The key to each round is the card that each player gets that they must use for their answer. If this card works well with the other cards you can score quite a few points in a round. If it doesn’t work well with the other cards though you will not do well in a given round. This is annoying since you could come up with a great answer that uses all of the cards on the gameboard but if it doesn’t work with the card in your hand you can’t use it. I actually think a variant where players just use the cards on the gameboard would be an interesting idea for the game which would eliminate most of the luck from the game.

The scoring in It Fits could use some tweaking because it is not explained that well in the rules. You score a point for every card you end up using in a round and you lose a point for every card that you don’t use. The instructions aren’t that descriptive in this area though. If you read the rule literally and you lose points for every single card you don’t use, you are going to make no progress in the game. You would need to use at least four of the cards in a round just to move forward one space. If you use less than four cards you will lose spaces. You are probably going to use three to four cards for most rounds so if you follow the rules in this manner you would be hard pressed to make any progress.

My group ended up playing the game where you would gain one space for each card used and lose one space for each card that you claimed fit your answer but was denied by the group. I think this is a better rule since it makes it much easier to make progress in the game. It is just too hard to consistently use at least four of the cards in a round to make progress. The cards just don’t work well enough together in order to use more than four cards except for in rare occasions. Interpreting the rule in this way also provides a risk reward element where players could take a risk by using a card that doesn’t apply that well. If they can sell the group on the idea they can get more spaces but they could just as easily lose points.

For people that are space conscious they are probably going to hate the case for It Fits. I like the idea of making the case look like the words It Fits but it creates an issue when trying to store the game. The box is such an awkward shape that it is going to be hard to stack along with other board games. Other than the awkward box, the game’s components are solid but unspectacular. The components are what you would expect from one of these type of games. While I would have preferred more cards, the game has enough cards. The game has 250 cards which should be enough for quite some time. You will encounter repeat cards since you are going to use around ten cards each round. You are unlikely going to get the cards in the same combinations so the game will not repeat itself too often. It should be pretty easy to make your own cards as well if you would ever get tired of the cards that originally came with the game.

Overall It Fits is a solid but unspectacular party game. I had fun with the game since it has an interesting concept. For a party game it actually makes you think. It doesn’t really do anything special though that I haven’t seen done in other games. The scoring system could use some work and the game does rely too much on luck at times.