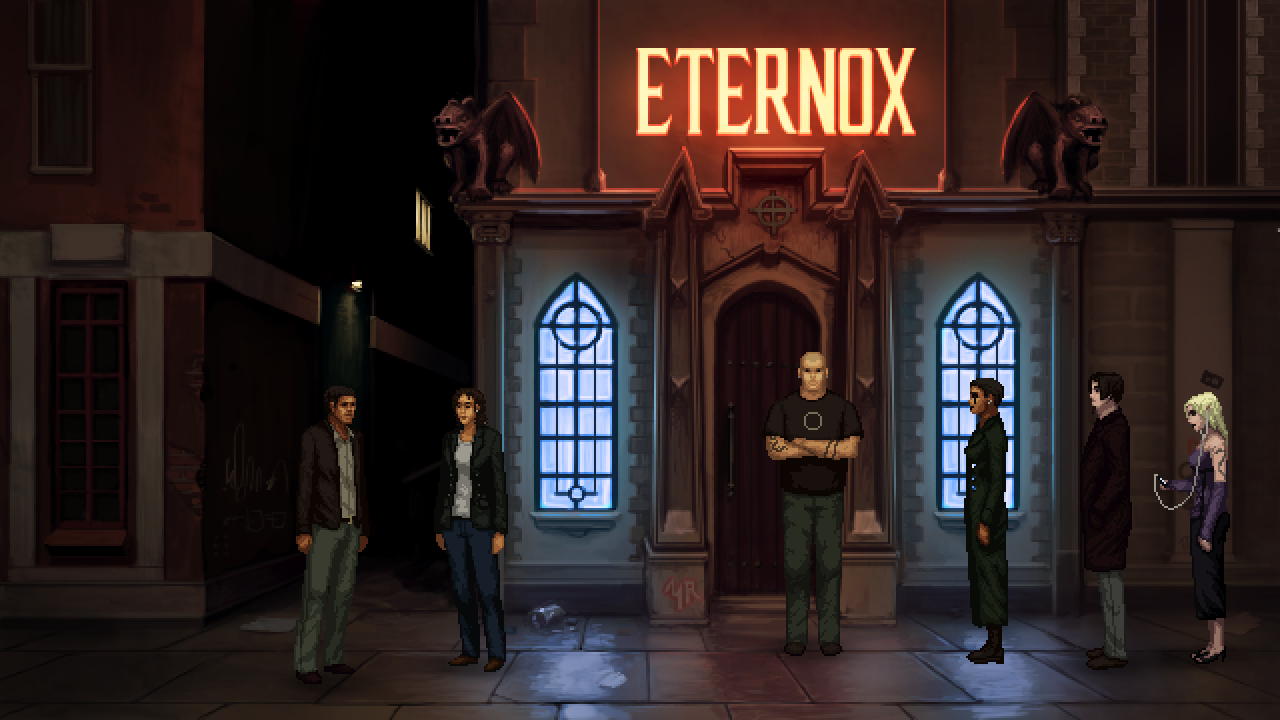 In Unavowed you play as a man or woman (you get to choose the protagonist) who was possessed by a demon. While under possession for a year the demon leaves behind a trail of bodies and terror. One day your torment ends as a mysterious group known as the Unavowed exorcise the demon. With no where else to go you decide to join the Unavowed whose task is to protect New York City from supernatural threats. With paranormal threats popping up all over the city you soon discover that there might have been more to your possession than you first thought. Can you and the rest of the Unavowed stop the looming darkness before it is too late?

When I look at point and click games there are two things that are usually the deciding factors between a game being good or bad: the story and the puzzles. I will get to the puzzles later but I want to start by talking about the story as that was what drove me to try out Unavowed in the first place. Being a big fan of all things sci-fi the idea of joining a group tasked with fighting paranormal threats was a good premise for a point and click game. While there are quite a few other franchises that utilize a similar premise, Unavowed takes this premise and makes it its own. The game does a really good job with the world building creating its own unique world. The game comes up with some creative ways to introduce some unique paranormal creatures that are rarely used in other games/movies/etc. Unavowed does such a great job creating an interesting world that I hope Wadjet Eye Games decides to explore it further in another game.

In addition to the world building I think the game does a good job creating interesting characters. Throughout the game you will be joined by four main companions. These companions include a half human half jinn, a fire mage, a man and his ghost companion who can talk to the dead and a New York cop. I think Unavowed does a good job with the characters for the most part as it gives them interesting backstories. While I didn’t really care that much for one of the characters, I really wanted to learn more about the other characters as I cared about what happened to them. Unavowed is also pretty creative in how it gives out information as you can learn a lot just listening to two characters talk to one another when you aren’t doing anything. I wish the game would have let you take three characters with you to each case as I felt like I was missing out on the story of the character that I had to leave behind.

Choosing which characters to bring on each case is just one example of how Unavowed distinguishes itself from the rest of the genre. Typically the point and click genre is pretty straightforward. You are given a long list of quests that you have to solve to proceed to the next puzzle. The genre is not known for giving players a lot of choices as you usually can only follow the path designed by the creators. While the gameplay is still pretty straightforward in Unavowed, I was actually surprised by how the game adds some decision making to the genre.

Shortly after you begin the game you will be presented with two decisions that have some impact on the rest of the game. You can choose between a male or female protagonist as well as the profession of your character before they were possessed. These two decisions are used to determine the backstory of your character. You then play out your backstory which shows how your character became possessed in the first place. While these decisions mostly impact the beginning of the game, your decisions do occasionally impact what actions you can take the rest of the game. Along with creating your backstory you will be making a few more decisions throughout the game. At the end of each case you are presented with a decision that will determine the outcome of the case.

The more important decisions are choosing which companions to bring with you on each case. You begin the game with only two companions. After recruiting additional members though you will have to choose which you want to bring to a case as you can only have two companions with you on each case. This might not sound that important but it actually makes a difference in how you will solve some of the puzzles in each case. Each companion has a special ability that you can use to help you solve puzzles. Throughout each case there are different ways to solve certain puzzles and what companions you end up choosing will determine how you will solve the case. For example in some situations you might encounter a ghost that has important information. If you didn’t bring the companion that can talk with ghosts though, you will have to find another way to get that information. While this doesn’t drastically change the game, I thought it was a really nice addition that more games from the point and click genre should consider adopting.

Outside of being able to make some choices which will impact how you will solve some of the puzzles, Unavowed plays a lot like your typical point and click game. Like every other point and click game the main gameplay involves clicking on different parts of the environment to find items and clues. You use those items and clues in order to solve puzzles and advance the story. If you have ever played a point and click game before you know what to expect. While Unavowed doesn’t revolutionize the genre there is nothing wrong with that. The mechanics work well and are fun. Basically if you like point and click games you will enjoy Unavowed’s gameplay. If you don’t like these type of games, it is unlikely to change your mind.

One thing that the point and click genre has always had problems with is finding the right difficulty. The problem with point and click games is that most games in the genre are either too difficult or easy. Some games have convoluted puzzles where you have to be in the same mindset as the puzzle creator(s) in order to solve them. Other puzzle games basically hold your hand and guide you through the puzzles. The problem is that neither extreme is good. Of the two I would rather play the easy game than the tear your hair out frustrating game but being too easy can also be a problem as it is not very challenging.

Just like with Shardlight, I would say Unavowed is on the easier side of the spectrum. The game doesn’t hold you by the hand but if you pay attention to what is going on it is pretty straightforward what you should do at any given time. Maybe it is just due to playing so many puzzle/point and click games but as soon as I found a new clue/item I pretty much knew what I had to do with it. Therefore I didn’t have to spend much time figuring out how to solve a puzzle. There is one puzzle later in the game that took a little time to figure out (due to my own fault) but otherwise I can’t say that I found Unavowed to be that challenging. I thought Unavowed’s puzzles were well designed but they could have been more challenging.

As for how long the game is, that is going to depend on how well you do at solving the puzzles. It took me around eleven to twelve hours to beat the game but I didn’t have a lot of trouble with most of the puzzles. You may be able to shave off an hour or two if you rush but I would guess that it should take most people around eleven to twelve hours. If you struggle with some puzzles it could take a little longer. The point and click genre is generally not known for having a lot of replay value as all you can do is play through the same story and puzzles. Due to the decisions you have to make throughout Unavoed though I can see a little more replay value in the game than most games from the genre. The main story doesn’t drastically change but there are some small changes here and there which fans of the game may appreciate exploring. I don’t think there are enough changes where you will want to immediately play the game again but it does make future plays more interesting as you can choose a different path.

Unavowed may not be perfect but it is a good point and click game. The game does a great job creating an interesting world to explore with compelling characters. I really hope Wadjet Eye Games makes a sequel or another game in the universe as I would like to explore the world further. The gameplay is pretty typical of the point and click genre which is not a bad thing as the game does a good job with it. The one area where Unavowed distinguishes itself from the rest of the genre is by giving players some choices which affect how you will solve some of the puzzles. This doesn’t drastically change the game or story but it adds a little variety and some potential replay value. The only real problem that I had with Unavowed is that it is on the easy side. The puzzles are pretty good but you will usually solve them quickly. If you want a game with challenging puzzles Unavowed may not be the game for you.