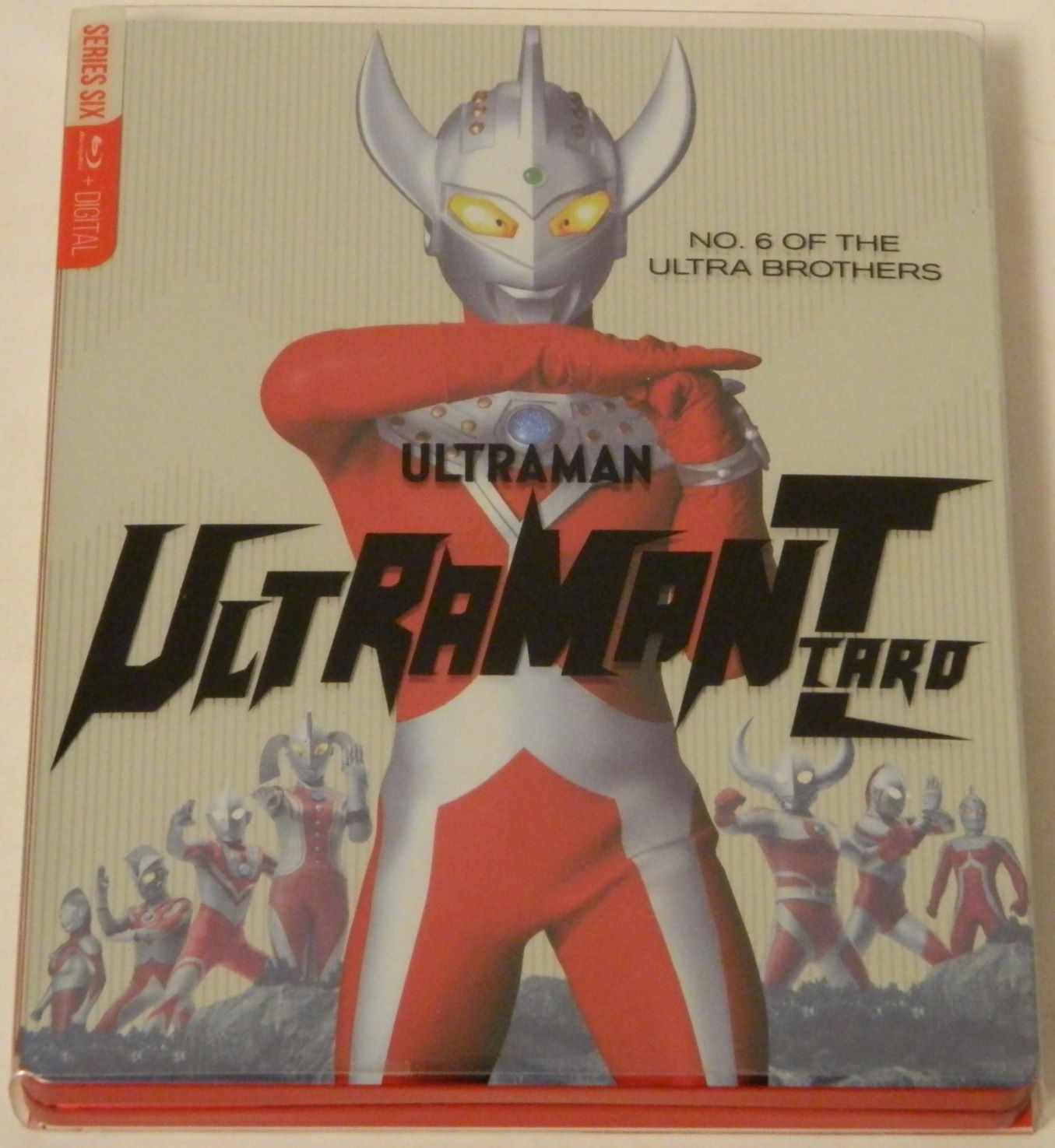 While I have enjoyed my time with nearly all of the Ultraman series titles I’ve watched and reviewed thus far, I do have to admit that they are becoming very difficult to review. While the newer titles sometimes do things differently, the old series in particular are more or less the same thing over and over again with just a fresh set of paint applied to them (new characters, a “brand new” organization, a fresh Ultraman and slightly different powers, etc.). With how frequently Mill Creek Entertainment is releasing these titles, I’ve watched literally hundreds of episodes of these series in the past year or so and they are really starting to blend in with each other at this point. I usually can’t even finish a series before the next title is released. With all that in mind, there is absolutely nothing wrong with Ultraman Taro: The Complete Series, there just really isn’t much to say that I haven’t already said in prior reviews. I wish the older series would have changed up the formula a bit more than they did but this is still a pretty fun Kaiju series for children and kids at heart. If these releases were spread out a bit more (due to licensing agreements this probably isn’t possible), I’m sure I would be enjoying these series more than I have been recently (again, they’re still fun but certainly very repetitive) but that’s the nature of reviewing Blu-rays for you.

If you’ve watched one Ultraman series (especially if it was an older one), you pretty much know what Ultraman Taro is all about. For those who haven’t though, this is a Japanese Kaiju/tokusatsu series (the sixth in the long-running Ultra series that is still going to this day). Like pretty much every entry in the franchise, Ultraman Taro begins with an act of heroism. World traveler and wannabe boxer Kotaro Higashi dies while fighting a Kaiju but is brought back to life by the “Mother of Ultra” and given the power to turn into Ultraman Taro, a gigantic and powerful warrior with the job of protecting Earth from giant monsters. Like all of the other recent Ultra series titles, Kotaro joins an organization dedicated to stopping Kaijus. This one is called ZAT and boy does it have some of the tackiest looking vehicles, gadgets, and weapons I’ve ever seen. Think Tomorrowland (the Disney theme park) but about a thousand times cheaper and tackier (including what can only be described as an actual clown car complete with a “red nose” of sorts). Almost every episode involves Kotaro and ZAT finding out about a Kaiju, fighting to stop it, but ultimately needing the help of Taro to defeat the monster.

While I have not watched all of the episodes of this series or the preceding ones (one of them I missed completely), Ultraman Taro is supposedly the series where the Ultra family starts to become more of a thing. While previous Ultramen would show up in past series, this marks the first appearance of Mother of Ultra (at least to the my knowledge). It’s also quite possibly the weirdest series I’ve seen yet in a franchise well-known for campiness and cheesiness. There’s some weirder monsters like a group of abnormally large ants, a tongue monster, a walrus with hunger pangs, a giant samurai, and others I don’t recall seeing in past series (though I have not been able to watch every episode). It also sounds like I haven’t even gotten to the weirdest episodes of Ultraman Taro yet as the craziness seems to increase throughout the series. Due to this and the series being slightly less bloody and violent than past releases (I was often surprised by how many monster heads, limbs, etc. were chopped off in the last few series), Ultraman Taro might be one of the best ones for kids to watch. It’s certainly the weirdest one at least but the episodes do still wind up resolving in more or less the same way. If you are an avid reader of this blog, you know I like my content weird and wacky. However, due to the episode structure being mostly the same throughout, the increase in wackiness is offset by the burnout I’ve been feeling for this franchise lately.

Otherwise, the only slightly major differences I noticed between Ultraman Taro and the rest of the Showa era series involve a greater reliance on stories involving children and more two or three-part episodes than usual. There’s always at least a few episodes involving children in these series but it feels like there’s a kid involved in like half of these episodes. It was probably a good idea for a show meant for children to feature them more often but as an adult, I also find these episodes to be a bit more annoying than ones not involving them. There’s also four two-part episodes and one three-parter in Ultraman Taro. The reliance on multiple-part episodes is especially noticeable early on as after the pilot episode, the next four episodes consist of a pair of two-parters. I actually like the idea of turning some of these stories into longer entries (25 minutes per episode is usually too short to do much of anything new) but I feel like the ones I watched weren’t the right choices for them as they kind of dragged (especially the turtle one).

As usual with Mill Creek’s Showa era Ultra series releases, Ultraman Taro: The Complete Series comes in two different versions. As usual I requested the SteelBook edition for review and if you’ve received any of the prior five releases, you pretty much know what to expect from the packaging as it is the same great presentation as the rest. As usual it offers very sturdy SteelBook packaging and a nice booklet about the series, episodes, characters, and monsters. I’m still in love with the design Mill Creek uses for these releases and they look so good next to each other. If you want to save a few bucks though, the standard packaging version is also pretty nice and this release continues the mural motif on the spines. As usual, no extras are included but it’s highly unlikely any interviews, deleted scenes, gags, or anything like that was kept in the first place and even if any of it was, it likely wouldn’t have been worth effort or added cost to include them.

As usual, I will start this paragraph about the video quality off with a disclaimer that I am pretty bad at recognizing not so obvious things when it comes to Blu-ray quality. Of course I can tell when things look really bad (though I am horrible at describing why and don’t really know the technical reasons) or great. It’s the titles in between (especially older titles like this that are naturally not going to look as good as newer releases) that I struggle with identifying good and bad titles on a video quality basis. While Ultraman Taro: The Complete Series is far from a pretty looking release (mostly due to age and the cheapness of the production), I do think it looked better than some of the previous releases in this series. There didn’t seem to be as many noticeable flaws with the picture quality and the effects (especially the transformation to Taro) looked better than what I remember in past series. The thing is, the video quality really doesn’t matter that much in the first place as Ultraman Taro never even got an American DVD release before this. This is the only way you can own this series on home video and I think the video quality is passable for such an old and low-budget series.

In preparation for this post, I read a few reviews online and it seems like Ultraman Taro is regarded as a mid-tier entry (at best) in the Ultra franchise. This was pretty surprising to me as Taro is in a lot of the newer series Mill Creek has put out and I figured his original series must have been very popular if he is one of the Ultramen showing up most frequently in the new ones. Ultimately though, I pretty much agree with that assessment. Ultraman Taro is good but not great, I enjoyed the added weirdness but it’s still pretty much the same thing as every series that came before it. That’s not necessarily a bad thing as nearly all of these titles are fun to watch if you are a kid at heart like me. They are just so repetitive that no episode or series really stands out from the rest of the pack.

Ultraman Taro: The Complete Series was released on Blu-ray on January 12, 2021.