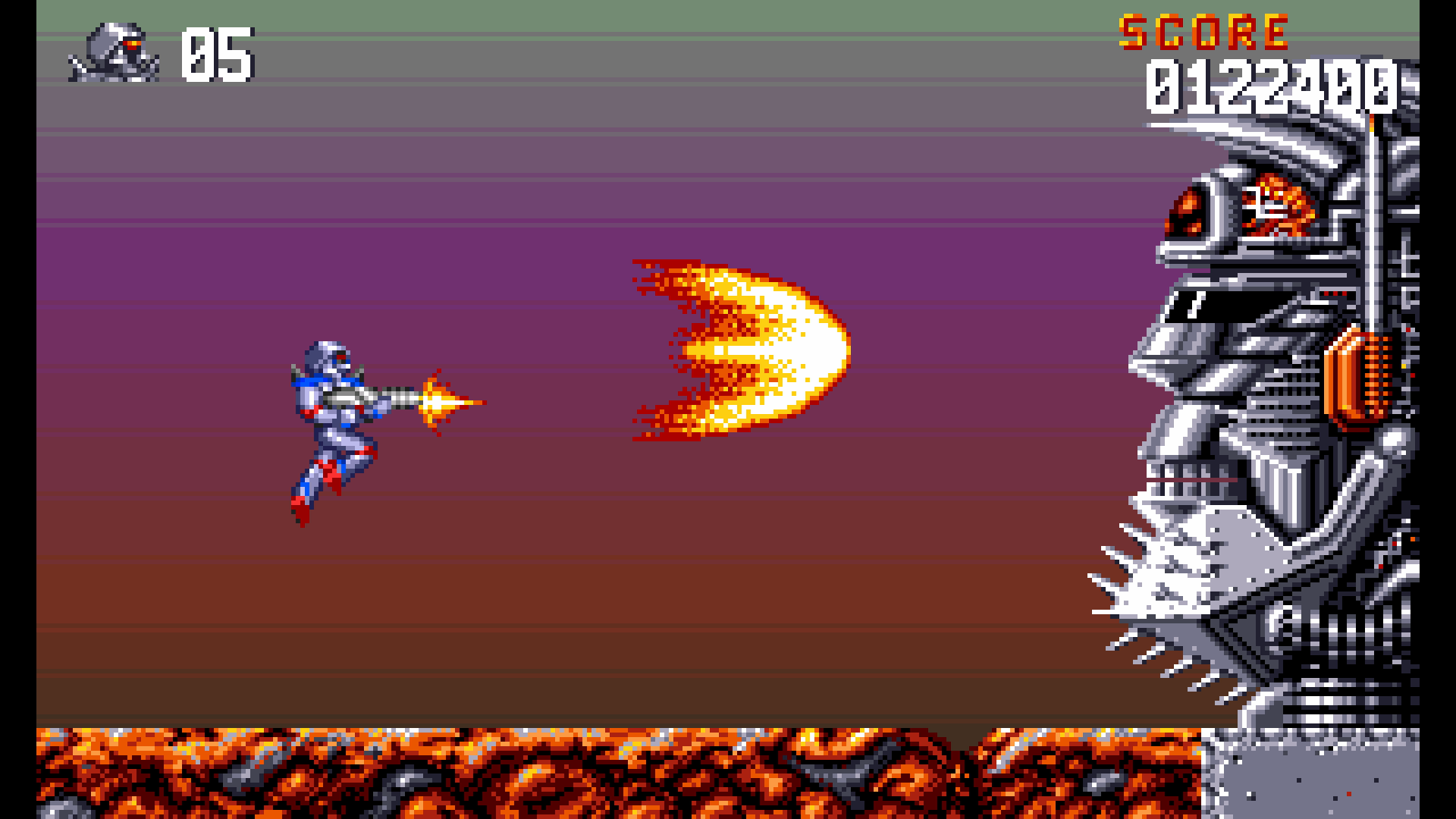 Originally released back in 1990 the Turrican franchise spanned a number of games in the early days of home consoles but died around 1995 as it never made the jump to 3D. While not as popular as some other franchises from that era, Turrican had a pretty big fanbase as it is still well regarded today. I have to admit that I wasn’t familiar with the franchise as I had never played one of the games before. Well I finally got a chance to check out most of the series when I received a copy of Turrican Flashback from ININ Games. Turrican Flashback is a remaster of most of the games from the series and it was released today on Nintendo Switch and PlayStation 4. Turrican Flashback is a faithful and fun look back at an old video game series which includes all of the charm and flaws of retro gaming.

Turrican Flashback is a remastered collection of most of the games from the Turrican franchise. It includes Turrican, Turrican II: The Final Fight, Mega Turrican, and Super Turrican (SNES). Based on my research it seems to be missing Super Turrican for NES and Super Turrican II for the SNES. For those of you familiar with the franchise, this should all sound pretty similar. Basically the Turrican franchise is a series of games where the hero dons a robotic armored suit in order to face off against the mechanical enemy known as “The Machine”. If I were to classify Turrican Flashback’s gameplay I would say that it is a combination of a number of genres.

Probably the most prevalent is a run and gun element where you have a gun that you use to destroy all of the enemies that stand in your way. You will acquire power ups which change your weapon to fire different projectiles. You can either shoot in front of yourself, or most of the games allow you to use a weapon that you can directly control the aiming of. Most of the levels also include a boss which has a unique attack pattern and weak points.

This is the element that I found to be the most satisfying about the games in Turrican Flashback. I will admit that the shooting is not super deep as you can keep the fire button on and eliminate quite a few enemies before you can even see them. Nonetheless this is quite fun. The game does a really good job making you feel powerful with this mechanic. You are vastly outnumbered which forces you to mow through enemies. I just found it to be really satisfying wiping out all of the enemies that stood in my way. Fans of retro run and gun games should have quite a bit of fun with Turrican Flashback if you weren’t already familiar with the franchise.

The other major element of Turrican Flashback is a platforming/exploration mechanic. The game gives you a single jump and one of the games gives you a grappling hook. The games also have a mechanic similar to Metroid where you can curl up into a ball to move through the world quicker. You will use these to jump between platforms and reach hidden areas of the levels. Unlike a lot of games from this era, the levels in the game are actually quite large and have a lot of different paths to explore. There really isn’t just one path through the levels as you need to explore to find your way to the end of each level.

I was a little more conflicted about this aspect of the game. I applaud the game for having a legit exploration mechanic. Most games from this era were quite linear where you just kept moving right with very little vertical movement. There is actually a lot of vertical movement in Turrican Flashback as there are options to progress. This does lead to some problems for the games though. It is kind of easy to get lost. You can usually rely on trying to move right whenever possible as that is usually the correct path to take. That is not always the case though, and it is kind of hard to distinguish between different parts of the levels. Making things even worse is that the levels give you a time limit. If you don’t reach the end in time you will lose a life. I honestly found this aspect of the game to be kind of frustrating. It gets better in the later games, but it is an issue with the games that are due the era that they were originally made in.

This brings me to another issue with Turrican Flashback. I would say that the controls can be kind of hit or miss. The controls that deal with the combat are pretty precise. These controls are responsive where any issues are mostly your own fault.  The platforming controls are not quite as good though. You can tell that these mechanics were more secondary to the game. The game does give you a pretty high jump which helps. The problems mostly come from it being hard to judge the collision detection with the environment. This makes some of jumps quite difficult as you have to be pretty precise about where you jump from and where you jump to. I can’t fault the remaster for these issues though as these types of problems were pretty common for this era of video games.

One thing that most retro video games are known for are their difficulty. Early console games had to be difficult because due to the technology they couldn’t be that long. To extend the length of a game, they had to be made tough where you had to replay the same levels over and over again in order to master them. I have to say that Turrican Flashback lives up to the legacy of old games being difficult compared to modern games. It will test your gaming skills. The game includes a health bar so you can take a number of hits before you die. You lose your health quickly though so you still need to be careful. When you lose all of your lives you will lose a lot of progress. Those that want a real challenge should find it in Turrican Flashback.

Normally I would say the high level of difficulty would be a turnoff for most players. Unless you are really good at old video games, you will struggle with Turrican Flashback. The good news is that like a lot of remasters, the game actually includes two different ways of playing. You can play it like it was originally designed where you lose your progress once you have lost all of your lives. Otherwise you can choose the new mode which introduces save states and a rewind feature. Throughout the game you can save your progress so you don’t lose everything when you die. The rewind feature also allows you, with the press of a button, to rewind as far back as you want. These two features allow you to reverse mistakes which will make the game easier. The game is still quite hard though so you will still be challenged. The one drawback to using this mode is that you can’t receive any of the trophies.

For the most part I would say that Turrican Flashback is pretty loyal to the original games. The addition of the save states and rewind features are a nice addition in my opinion. Otherwise the game includes a few other features that allow you to customize the gameplay experience. Most of these relate to the visuals as the game was originally designed at a 4:3 ratio which doesn’t work well with modern TVs. Mostly you can add backgrounds around the original screen ratio or you can use the new widescreen mode. The game doesn’t have a ton of additions, but it does enough to make the games accessible over 25 years after they were first released.

Turrican Flashback is basically what you would expect from a remaster of some classic video games from the early 1990s. This remaster includes four of the games from the franchise. The ports seems pretty faithful to the original games with a few quality of life improvements. The games mostly consist of two main mechanics. I quite enjoyed the run and gun mechanics as it is fun mowing down the enemies that stand in your way. The platforming and exploration mechanics are a little more hit and miss. These elements were pretty original for their time. Between the controls not always working as well as they should and the ability to get lost pretty easily, these aspects of the game don’t hold up as well as the run and gun mechanics. The game maintains the patented old school difficulty which should appeal to fans of the original games and retro games in general. The game also includes a modern mode that has save states and a rewind feature allowing you to correct some of your mistakes. Even with these additions though, Turrican Flashback can still be pretty difficult.