Since Mill Creek Entertainment’s acquisition of the distribution rights to the Ultraman series last year, fans of the franchise have been treated to a veritable cornucopia of series and movies both old and new. Most of the series released hadn’t even been available in America on DVD, let alone Blu-ray. Last month saw the release of the fifth series in the franchise, Ultraman Ace: The Complete Series, in both standard packaging and SteelBook versions. While I’m glad to see all of these series make it to America for the first time ever, Ultraman Ace is certainly a more mediocre offering from the franchise. Outside of a few small changes, it’s pretty much the same old thing as the last few series. It’s not all bad as even middle-of-the-road Ultraman series usually provide some good old cheesy fun. However, since I’ve now watched five of them (plus predecessor Ultra Q) in less than a year, these shows are starting to blend in with one another and not standing out as much. At this point, the series had pretty much gone the Pokemon route, resetting things each year with just a few small changes. I think if I hadn’t already watched hundreds of episodes of these shows in the last year, I would have enjoyed Ultraman Ace a bit more but it’s still a solid enough series (though one non-diehard Ultra series fans could probably skip).

Ultraman Ace starts off with the franchise’s traditional catastrophic monster attack where as per usual, a brave man (Seiji) gives his life to save a child. He is given the power to transform into a brand new Ultraman (this one’s called Ace) but there’s a twist, as another person also heroically gave her life as well. For the first time ever, a female character (Yuko) has the ability to transform into an Ultraman (Ultrawoman?). They unfortunately don’t each get their own Ultraman to transform into, they have to share Ace (who can be activated via rings Seiji and Yuko wear). This also has the side effect of them needing to be close enough to each other to transform (which they usually do by leaping through the air in absolutely ridiculous fashion). Otherwise, things are pretty much the same with some small changes. MAT has become TAC (Terrible-Monster Attacking Crew), which Seiji and Yuko join despite having no real useful monster fighting skills (I don’t think a delivery truck driver and an orphanage worker would be a priority for an organization like this but they somehow pass anyway). The other most notable change is that the giant monsters they fight are now called “Terrible Monsters” (or “Choju”) as they are controlled by an alternate dimension/alien creature named Yapool instead of attacking on their own accord. Otherwise, most episodes are still basically the same old sequence of monster attack, TAC (and sometimes Ace) failing to stop said monster, followed by destruction until Ultraman Ace finally stops the monster and foils the Yapool’s plans.

Ultimately, Ultraman Ace tries a few new things but they do little to shake up the formula that was already starting to get a bit stale. They do change things a very, very slight amount but one of them isn’t even permanent as a shakeup a bit past the midpoint of the series resets the show’s concept back to the status quo. I don’t think the show utilized the concept of two people sharing the Ultraman transformation as well as it should have. You would think it would add a lot of drama with them often being separated for various reasons and needing to get close to one another to transform. Outside of a few episodes here and there (including one where Yuko is in the hospital), they usually have very little trouble getting close enough together to transform and this really doesn’t matter much in the grand scheme of things. Honestly, Yapool controlling the monsters is probably the bigger shake up to the formula of the two and even that doesn’t do too much to add originality to it. I don’t exactly blame the producers for not trying to change a successful formula (its not like kids would notice the repetitiveness of the episodes anyway) but it does ultimately make this a very middle-of-the-road series in the Ultraman franchise. Outside of a few episodes here or there, I rated nearly every episode a three out of five meaning all of them were worth watching but offered very little excitement or fresh ideas.

One thing I absolutely have to write about is just how violent this Ultraman is. Ace isn’t messing around, he doesn’t just toss giant monsters into space, body-slam them into submission, or vaporize them like the other Ultramen I’ve seen. That’s not enough for him, he’d rather behead them, rip off their appendages, or punch a hole right through them (that’s not hyperbole, all three of these things actually happen in the series). Monsters and aliens are also torn apart (including the skin which leads to some brief blood spurts), cut in half (with “guts” coming out), and dissolved with a type of acid. I almost feel bad for these “Terrible Monsters.” Because of the violence, I wouldn’t recommend watching Ultraman Ace with young children. If this would have aired in America, I’m sure parents would have been outraged and demanded its cancellation. Obviously it isn’t horrendously violent, if I had to give it a rating I’d probably say PG-13 would fit it best. While the other series could get pretty violent at times, I feel like this is the worst one by far in this area. Teenagers (and maybe even tweens) should be fine but I think some of the episodes are just a bit too much for younger children.

For the early Ultraman series I’ve reviewed so far, I was impressed with the video quality on Ultra Q but felt like there was a dip in quality  once the franchise went to color in Ultraman: The Complete Series (my feelings about Return of Ultraman are pretty much the same but I haven’t finished that review just yet). Ultraman Ace visually looks very similar to those latter two releases. I wasn’t exactly expecting an almost fifty-year old children’s show from Japan to look amazing on Blu-ray but it still didn’t really impress me visually. It’s absolutely acceptable considering the circumstances but releasing the show on DVD probably would have been fine as it only looks a bit better than standard-def to me at least. If you go in with reasonable expectations, you’ll probably be fine with the video quality but just don’t expect it to “wow” you. This is the only home video release of the show in America though (and the price is very reasonable). 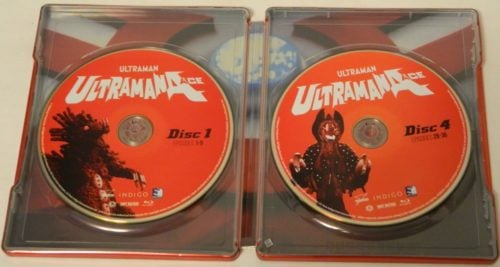 The packaging for Ultraman Ace: The Complete Series SteelBook Edition.

While I wasn’t impressed with the video quality on this release, I’m still in love with the packaging design on these releases (especially the SteelBook ones I’ve been requesting). Their design is just so sleek and they really look nice together. If I had the ability to have my Blu-ray collection look all nice and orderly, these sets would look amazing next to each other. As usual (for the older Ultraman series at least), Ultraman Ace: The Complete Series comes in both standard and SteelBook packaging options (the SteelBook is actually considerably cheaper at the time of this post’s publication for some reason). While both look great, I personally prefer the look of the SteelBooks (and the added protection they provide the Blu-rays). No extras are included outside of a digital code for movieSPREE but Mill Creek does make up for it with the amazing packaging and a nice little 24-page booklet of episode descriptions and information about the series. I don’t really expect older shows like this to have bonus features in the first place (as it is very unlikely any extra footage, interviews, or such were kept back in 1972) and I’m definitely not going to take any points off for the lack of them. 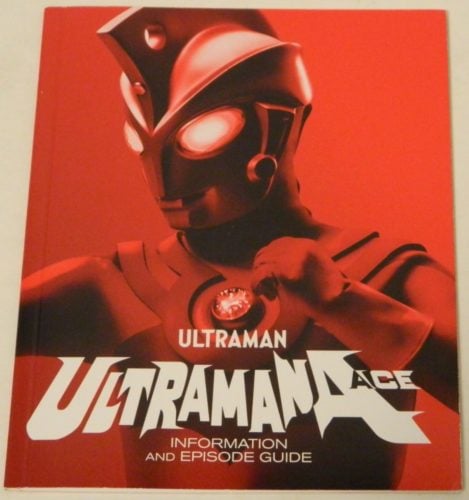 As always with the older Ultraman series, Mill Creek Entertainment has gone the extra mile with this release of Ultraman Ace: The Complete Series. The packaging is phenomenal, there’s another nice booklet included, and the video quality is acceptable for an almost fifty-year old children’s show from Japan (though its only on par with the last few Blu-ray releases in this series). If you are a big fan of the Ultraman franchise, you of course should pick this release up as its a solid (though unspectacular) series. I’m a bit more hesitant to recommend Ultraman Ace: The Complete Series to those who aren’t as enamored with the franchise or have been getting bored with the last few older series releases. Its pretty much the same thing you’ve seen in the last three series so its not going to change any minds. Still, I mostly enjoyed my time with Ultraman Ace and I know I would have liked it even more if it wasn’t the sixth series of this franchise I’d seen in less than a year (I do wish Mill Creek would spread these releases out a bit more). Recommended.

Ultraman Ace: The Complete Series – SteelBook Edition was released on Blu-ray on May 26, 2020.