While I have not played the game in many years, one of my favorite board games as a kid was Sorry. I honestly couldn’t tell you how many times that I have played the game. I am guessing that Sorry is not going to be close to as enjoyable as I remember it but I still have fond feelings for the game. With Sorry being one of its most popular games, when Hasbro launched their U-Build line in 2010 it was one of the five games that they decided to add to the line. For those of you who are not familiar with the line, the U-Build line was a group of board games that used Lego-like components to give players options to change up some of Hasbro’s most popular games to create their own games. I was skeptical heading into U-Build Sorry and unfortunately my initial thoughts were pretty accurate.

How to Play U-Build Sorry 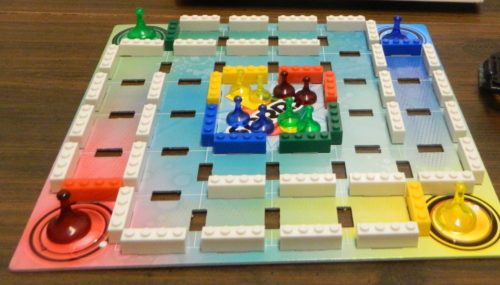 To start a player’s turn they roll both dice. Players can choose which of the dice they want to use first. 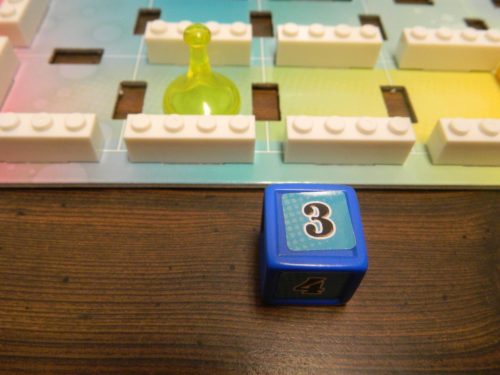 This player rolled a three so they moved their pawn three spaces.

In order to get their large pawn into the space in the middle of the board the player has to jump over the walls of their own color unless they currently have the ability to ignore walls. Once a player’s large pawn reaches the middle of the board the player can start moving all of their pawns. If there are still spaces remaining to be moved, the player can move one of their pawns out from the center space. 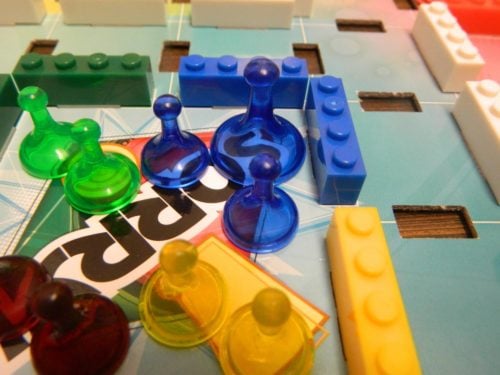 The blue player has gotten their large pawn to the center space. They can now start to move all three of their pawns. 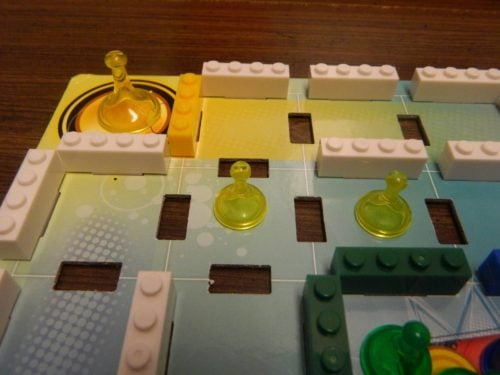 Wall: The player is able to move a white wall from any spot on the board to another spot where there is no wall. 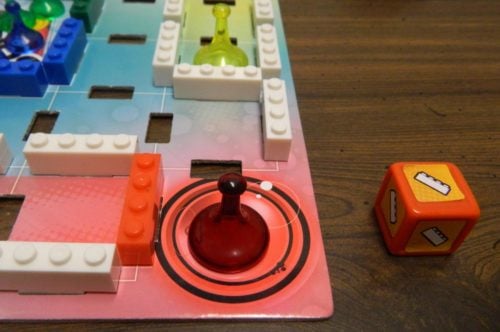 The red player has rolled the symbol that lets them move a wall. They chose to move the wall directly above their piece in order to open up a path to the center. 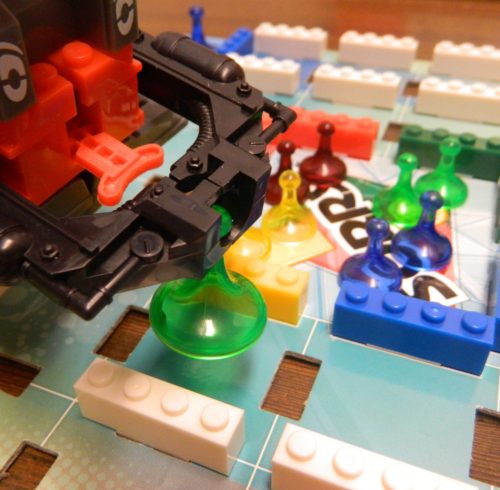 This player has rolled the claw symbol so they are using the claw to pick up the green player’s pawn.

Ignore Walls: For this turn only, the player is able to jump over any walls while moving. 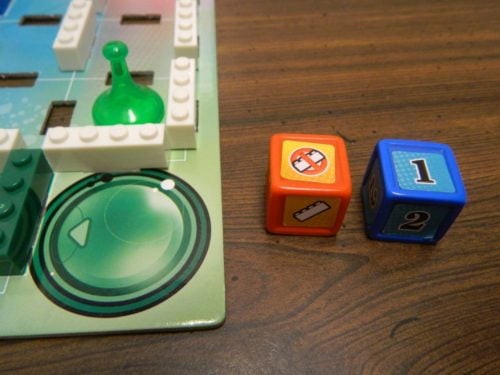 The green player rolled the symbol that lets them ignore walls so they chose to move over the white wall.

The first player to get all three of their pawns back to their start space, wins the game. 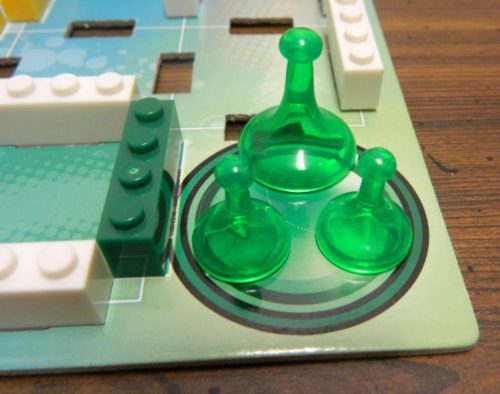 The green player has gotten their three pawns back to their start so they have won the game.

Here are the additional rules provided in the instructions that you can add to the game.

Players can place a white wall on top of another white wall. Players cannot move through this wall without having the “ignore walls” ability.

To speed up the game players can use their die roll to move both of their small pawns the full amount of the roll.

If there are only two players, each player can control two colors. Players can only move pawns from one of their colors each turn.

You can play a second game immediately after the first without resetting the maze.

My Thoughts on U-Build Sorry

With the Sorry brand attached to the game, I thought U-Build Sorry was going to play a lot like the original Sorry. After playing the game though I have to say that it doesn’t actually share much in common with the original game. Outside of the theme and moving your pieces around the board to get them back home, U-Build Sorry doesn’t really share anything in common with the original game. You can’t send other pawns back by landing on them and the game doesn’t even really have the home mechanic from the original game. While I give the designers some credit for trying something new, I think the changes for the most part are detrimental to the game.

As far as the special abilities I like the idea but the execution leaves something to be desired. The problem is that the abilities are not created equal. By far the best ability is being able to ignore the walls. This ability is so powerful because it basically neutralizes the ability to move walls around the board. It doesn’t matter where the walls are placed if you can just jump over them anyway. Being able to ignore the walls is also really helpful in the center of the board since it allows you to enter and exit the center space on any space which can save you several turns if you are able to use it to its full ability.

Finally the claw mechanic is probably the most fun of the three special abilities but at times can be pretty pointless. I will admit that it is kind of fun trying to pick up the pawns with the claw. If you put a little effort into aiming though it is quite easy to pick up a pawn. Basically the only purpose the claw serves is to try and send players’ large pawns back to their start or center space. At times this can be helpful as you can send a player back making them lose all of their progress. If all of the players are already at their destination though this ability is pretty pointless as it will only send them back a couple spaces if you are successful.

I mentioned earlier that I liked that the game was short but this also leads to one of the biggest problems that I had with the game. The game was never going to have a lot of strategy but the game’s short length makes it even worse. The gameboard is just too small. After just a couple turns you likely will already be in the center. Then a couple turns later all of your pieces will be close to home. With players being able to finish the game so quickly there is too little time to actually implement a strategy. While there are decisions to make in the game, they are usually so obvious that it doesn’t really feel like you have much impact on the outcome of the game. After a while it just feels like you roll the dice and the game plays itself. This leads to a dull experience.

While I have yet to play any of the other games in the U-Build series, U-Build Sorry is not an encouraging sign for the rest of the series. With a title like U-Build you would think that there would be quite a bit to build and there would be a lot of customization options. Neither are really the case in U-Build Sorry. As far as building for the most part you are just putting two pieces together to form the walls. The most complicated thing you have to assemble is the claw which is comprised of ten pieces. For you Lego builders out there, you will be disappointed if you thought there was going to be a lot of building in the game.

The U-Build line’s biggest selling point is the idea that the game has a lot of customization options in order to create your own game. While there is always potential that someone could create a good house rule for the game, if the included examples are any indication I don’t think there is a lot of potential in this area of the game. The only unique house rule they could come up with is letting players build a two block high wall. This could have been interesting except that the rules let players use the ignore walls ability to jump over it anyway so I can’t see it really having an impact on the game. There is potential to make some good house rules for the game but I wouldn’t say the potential is any better than most games. This is really disappointing for a game whose selling point is “change your game.”

On the topic of changing the game I have to say that I was expecting more out of the components than I ended up getting. While the bricks might look like Lego, they simply aren’t. While the bricks aren’t terrible, they are inferior to Lego. I will give the game some credit for the claw component though. It is kind of cute and it works quite a bit better then I was expecting. The gameboard is a different story. It is made of a pretty cheap cardboard. The gameboard doesn’t even do that good of job keeping the walls in place as the walls tend to fall down from time to time. Also as I already brought up, the gameboard is just too small. The game could have easily created a larger board which would have made the game last longer and also added more flexibility for players to create their own house rules.

Should You Buy U-Build Sorry?

I didn’t have high expectations for U-Build Sorry and unfortunately the game lived up to them for the most part. U-Build Sorry has little to do with the original game except for the theme and trying to get your pawns back to your home space. I will give the game some credit for creating a quick and to the point game which is simple enough that younger children can enjoy it. Unfortunately there is not much to the game for older children and adults. I liked the idea of the special abilities and they could have worked if some of them weren’t so much more powerful than the other abilities. While I liked that the game was short it also leads to the detriment of the game as it is too short for anyone to have an impact on the game outside of being lucky rolling the dice. This leads to the game being kind of dull. The idea that the game gives you options to change up the game however you want is also kind of misleading as I don’t see a lot of options for house rules in the game. Then add in the sub-par component quality. This all leads to a game that might be enjoyable for younger children but is a pretty dull experience for everyone else.

I have a hard time recommending U-Build Sorry. Unless you really like Sorry and simple roll and move games, I don’t think there is enough to U-Build Sorry to keep you interested for long. If you have young children that like these type of games they might enjoy U-Build Sorry. I would only recommend picking up the game though if you can find it for cheap.

If you would like to purchase U-Build Sorry you can find it online: Amazon