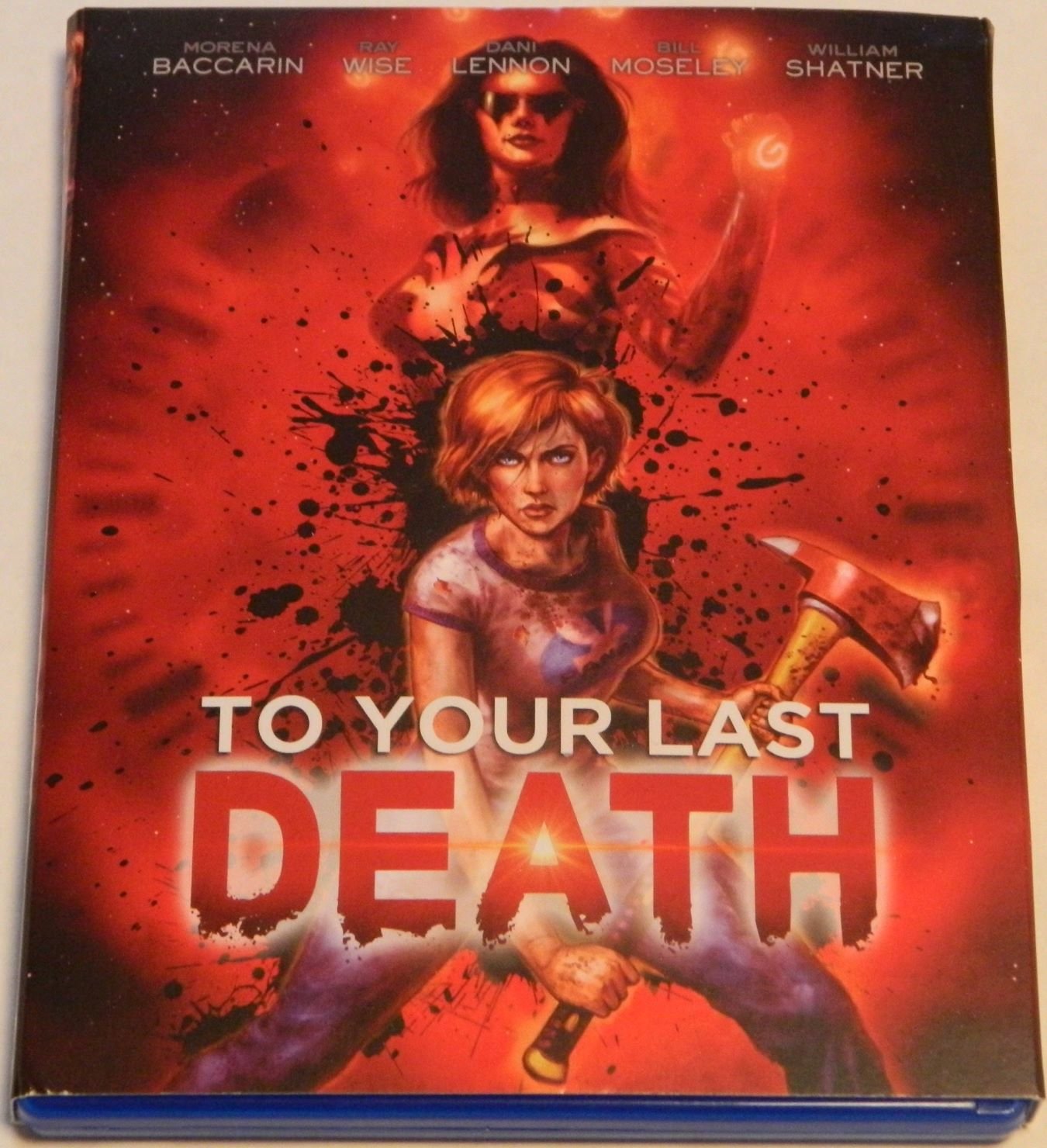 I have to admit that I had never heard of the movie To Your Last Death until very recently. The movie has been in production for a number of years after being funded through Indiegogo back in 2016. Usually I am not a big fan of horror movies or movies that feature a lot of gore. I was intrigued by To Your Last Death though as it had an interesting premise. I am always a sucker for time loop/Groundhog Day type movies. On top of that the movie featured a number of sci-fi mechanics that sounded pretty interesting. To Your Last Death is a solid mix of animation, horror, and time loop elements with some interesting ideas that don’t always overcome some of the movie’s faults.

To Your Last Death begins with Miriam leaving her father’s business carrying an axe with blood all over her clothes. Her father set up an elaborate and deadly game to punish his children who he believes ruined his life. As Miriam is the only survivor she is obviously arrested by the police as the prime suspect. While in custody she is contacted by the Gamemaster, a supernatural entity that runs a gambling operation of otherworldly entities that bet on the outcome of humans being put into extraordinary circumstances. The Gamemaster gives Miriam the opportunity to go back in time and try to save her siblings from their father’s wrath. With a second chance can Miriam save her siblings and bring down her father before it is too late?

After watching To Your Last Death I had some mixed feelings. There were some things that I really liked and others that I think could have been better. I have to say that it is kind of hard to classify To Your Last Death as it feels like it takes elements from quite a few different genres.

The most obvious genre is horror. The movie shares elements of slasher films and other general horror movies. In particular the movie feels like the Saw franchise as it has a number of different traps that feel right out of Saw. I wouldn’t consider the movie to be particularly scary though as I generally avoid horror films because I don’t like to be scared. Despite this I didn’t find the movie to be particularly scary. This is probably the element of the movie that I liked least. I will say that I have never been a fan of these types of movies as I don’t really like excessive gore and violence. I didn’t hate this part of the movie, but I think fans of the genre will appreciate them considerably more than I did.

The element of the movie that intrigued me the most were the time traveling/looping and sci-fi elements. I am not entirely sure why, but I have always been a sucker for time loop movies. Basically the premise of having the characters repeating the same days over and over again until they get it right is really interesting. Now this doesn’t work quite the same in To Your Last Death. Outside of resetting the previous day to start the movie, this element instead rewinds small parts of the day as the Gamemaster adds new rules or twists the story to make it more interesting for her fellow gamblers. I think the film should have used this a little more than it did, but I still really enjoyed it.

The other thing that really intrigued me about To Your Last Death is just the whole universe. Basically the premise behind the whole movie is the fact that there are otherworldly entities that like to bet on the outcome of humans put into dangerous situations. In this case the entities are betting on whether Miriam can save her siblings or whether her father will succeed once again. I thought this was a really interesting premise. I am kind of curious if the movie would ever get a sequel if they will explore this idea more.

The entities having to always be entertained leads to a plot that has a number of twists. Whenever they think things are too easy or unsatisfying the plot changes as the Gamemaster switches things up to make the story go in a different direction. In some ways I like the number of twists that the movie has. This keeps things interesting throughout the movie as things are regularly changing. Some of the twists are quite good and take the story in interesting directions. At times the movie relies too much on twists though where some of them don’t make a lot of sense. This directly leads to the ending which is okay, but I thought it could have been better.

I would say that the thing about To Your Last Death that I was most conflicted about was the animation/art style. If I had to quickly describe the animation style I would say that it reminds me a lot of the style used in Archer. In some ways this makes sense as it does give off some comic/graphic novel vibes. I think some people will really like this style while others won’t care for it. It is pretty obvious that part of the reason the animation style was chosen was that it was cheaper to use than full CGI. I think the overall look of the movie is pretty good. For a lower budget animated movie I thought it looked really good in HD on the Blu-ray. My biggest complaint with the visuals is that the animation just looked off at times. When characters walk and perform other actions they sometimes look like robots as their movements are kind of stiff. If you can get past this I think you will like the movie’s overall style.

On the topic of visuals I want to quickly discuss the movie’s rating. Being a lower budget film it is not that surprisingly that the movie was not rated. If it were rated though it would have easily gotten a R rating. Between some brief nudity and a decent amount of swearing this was assured. The biggest factor though was the violence. The movie is quite violent with various gory kills and there is a lot of blood. Your opinion of blood and gore will likely impact how you feel about this. I am not a huge fan of these elements as I think the movie goes a little too far at times. I am not really a fan of gore though so I think fans of it will appreciate these elements a lot more than I did.

As for the Blu-ray itself it is pretty much what you would expect. Like I mentioned before I thought the movie looked nice in HD. Unfortunately the Blu-ray doesn’t really feature any special features outside of the trailer. Based on the packaging though the movie does feature over four hours of bonus content on the official website toyourlastdeath.com.

I generally found To Your Last Death to be an enjoyable movie even though I think some audiences will enjoy it considerably more than I did. The movie actually has a pretty interesting premise mixing the Groundhog Day formula with a horror/slasher movie. The time loop mixed with the sci-fi elements creates a really interesting world. I wasn’t as big of fan of the slasher/torture (Saw) elements as they can be quite violent and gory at times. The movie has enough twists to keep things interesting even though it feels like at times that there are too many. As for the animation I think people are going to have differing opinions. At times I thought the visuals were pretty good. The animation of the characters sometimes look weird though as they kind of move like robots.

My recommendation comes down to your feelings on the premise and gory/slasher horror movies. If you aren’t really a fan of either I don’t see To Your Last Death being for you. If you like horror/slasher/torture movies or think the premise sound interesting though it might be worth checking out.

We would like to thank Quirk Pictures and Quiver Distribution for the review copy of To Your Last Death used for this review.

To Your Last Death Blu-ray Review