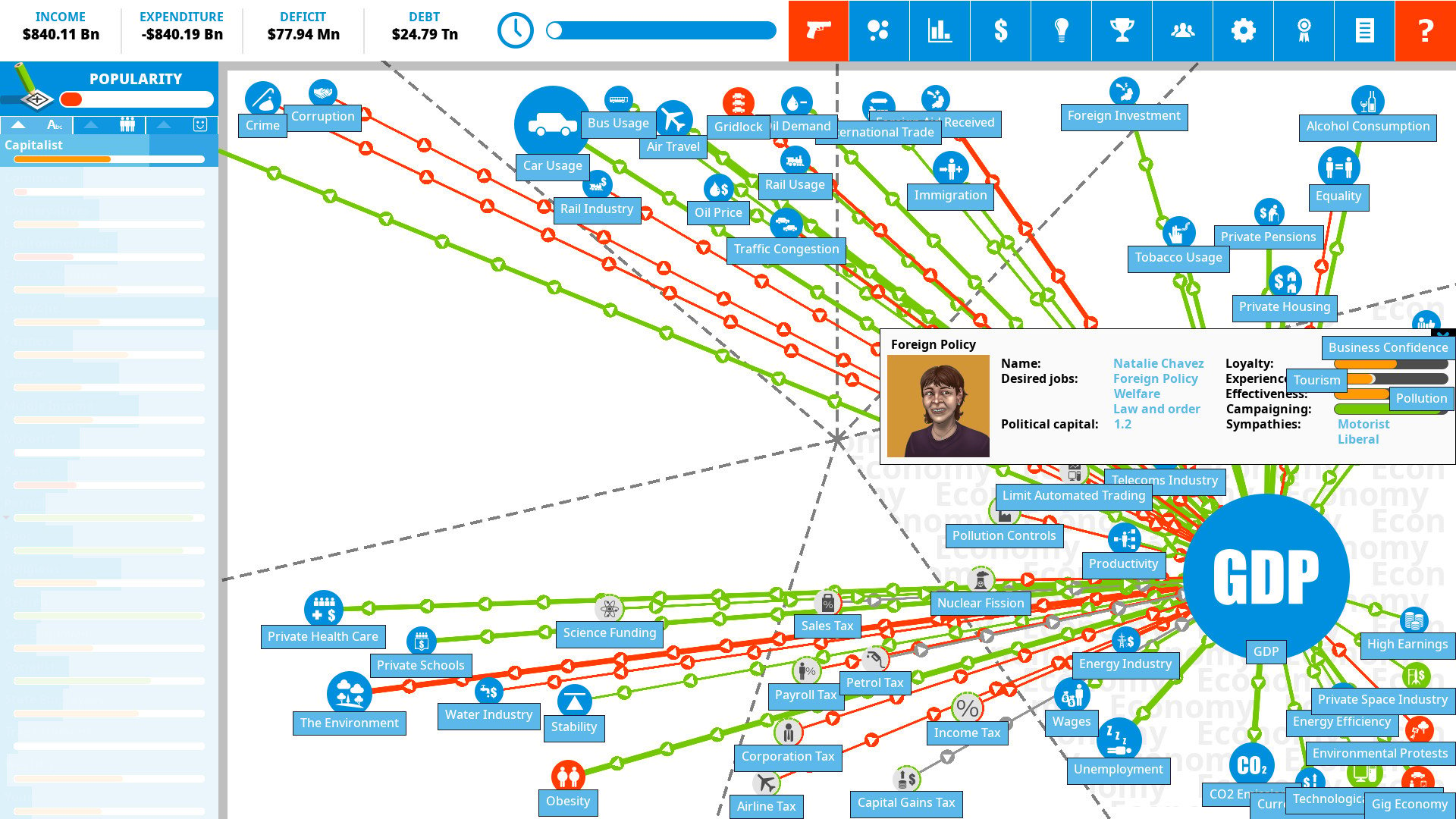 Here in the United States we are in the heat of an election that is less than a month away. As Geeky Hobbies is not a political site I am not going to be discussing policy or the election. Instead I am taking a look at the newest political video game that just launched into Early Access today, Democracy 4. As the title implies Democracy 4 is the fourth game in the political simulation strategy series and the first full fledged game released in the last seven years. Despite the series having been around for fifteen years I have to admit that I have never played a game from the Democracy series. As someone who is at least moderately interested in politics I was intrigued by the game’s premise. Democracy 4 has a decent learning curve, but those who are looking for a good political simulation game need not look any further.

In Democracy 4 you play as the recently elected leader of the country of your choice. As leader you are in charge of directing your country towards your vision of the future. To be a successful leader you need to balance this with what your voters want. Every action you take in the game requires political capital which comes from how loyal your ministers/advisers are. With your political capital you can adapt new policies or alter policies that are already in place. While crafting the country of your dreams you also have to deal with the budget as well as deal with terrorists and other angry groups of people that don’t like how you are running the country. All of this leads to your re-election campaign where you hope to maintain control. Can you succeed in creating a better country for your people or will you lose your seat or possibly even your life in the process?

If I were to explain the gameplay I would say that in many ways it kind of feels like a spreadsheet game. I don’t mean this as an insult. What I am trying to get across is the fact that the game is based heavily around numbers, percentages, and policies. The game utilizes a nice graphical interface, but most of the gameplay is still centered around reading various policies and either enacting them or altering ones that have already been enacted. There is a lot of reading in the game, analyzing trends, and choosing policies which will improve your popularity among your citizens. The game moves as quickly or as slowly as you want as you can spend as much time as you want analyzing proposals to choose which one you think will work best.

As Democracy 4 is a political game I want to begin by talking about how Democracy 4 treats the policies in the game. From what I have seen so far in the game it doesn’t appear to have a political lean in either direction. It basically just gives you policies that you can implement without commentary on whether the policy is good or not. The game allows you to change or implement some very hot button policies as well. The only commentary that the game has about policies is that it has built in what portions of the population agree with your proposal and which groups don’t. In general I think the game does a pretty good job in this area. There were a couple of policies where I don’t think a group would dislike/like a policy in the way the developers have programmed. This is pretty minor though and appears to be one of the biggest things that the game is working on during Early Access.

Despite enjoying what I have played of Democracy 4 so far, I will say that the game has a pretty specific target audience. Basically you need to be at least moderately interested in politics in order to enjoy the game. If you could care less about politics or only tune in right before an election I don’t think Democracy 4 will be for you. I say this because the whole game is built around scrolling through different policies to decide which to implement. If you don’t really care for policies I don’t see why you would enjoy implementing them. In many ways the game is pretty technical as you get into the nitty gritty of policy decisions. If this doesn’t sound all that interesting to you I don’t see the game appealing to you.

With that out of the way, if you like strategy/simulation games and are either a political junkie or have at least a moderate interest I think you will really enjoy Democracy 4. I have never held a political office, but the game plays like how I would anticipate it being the leader of a government. The reason that I think political junkies will really enjoy the game is the fact that there are a lot of different policies that you can implement in the game. These go much more in depth than just raising/lower taxes. For example you can choose specific types of taxes to implement/reduce. You can also choose how strong you want to implement a policy. These two things allow you to have a pretty big impact on how you craft your government. If you have ever thought that you can run the government better than your current leader, Democracy 4 is a good way to test that theory out.

So what type of government is best to run in the game? I haven’t played the game enough to be sure, but I don’t think the game has an apparent bias. It seems like you could succeed with any type of government. Generally speaking you are probably better off running more of a moderate government in the game as you won’t anger as many voters. Simply put you are better off implementing policies that a majority of citizens support or at least don’t despise. Running a government that is closer to one of the extremes becomes considerably more challenging as you will turn off quite a few of your constituents if you implement bold new policies. If you want to run a government towards one of the extremes though the game does allow you to setup your constituents general political alignment at the start of the game to make things a little easier.

With so many different ways to run your government there is a decent learning curve to Democracy 4. At this stage the game offers two types of tutorials. First all of the game’s instructions can be accessed from the main menu by reading through text. As I found this to be a little dry I chose to use the in-game tutorial which gives you a step-by-step tour of some of the main mechanics. Other less important mechanics that you run into while playing will pop up tiny little tutorials explaining what that mechanic is responsible for. Even after going through the tutorials I didn’t really know what I was supposed to do in the game. This was probably at least partially due to the fact that I had never played any of the previous games from the series. In a way the game gives you a little information overload as you are presented with a lot of different options right off the bat. It took me most of my first term to really start figuring out what I was doing in the game. Democracy 4 is a game that has a learning curve that you will have to adjust to. You are going to make mistakes with your first attempt as it is the type of game that you will get better at the more you play it.

As for the game’s current stint in Early Access I honestly wouldn’t have even known that it was in Early Access if I didn’t already know that. The game appears to already have all of the major mechanics in the game. Outside of having some issues closing some of the menus I haven’t encountered any bugs. As for what the game is planning on adding to the game there are two main focuses. First the developers seem to be spending quite a bit of time trying to balance the gameplay and fix any bugs. The game also plans on adding more policies, events, and other situations that players will have to deal with. The game is already in good shape, but is expected to stay in Early Access until early next year. I am interested in seeing where the game will go in the future.

With a game like Democracy 4 it is basically impossible to determine how much time you will get out of the game. The game doesn’t really have a set length in a conventional way as there is no campaign. Your run as leader will usually have a definitive end date as you can only run your country for as long as the country in real life allows their leader to serve. For example as the United States you can play for eight years at max. How long a playthrough lasts will ultimately depend on how successful you are and how much time you put into your decisions. If you take your time and are a successful leader a playthrough is going to take considerably longer than if you rush through decisions and your people hate you. The real length in the game will come from how many different scenarios you want to run through. The game is theoretically endless as you can keep playing as different countries in different scenarios. How much you get out of the game is ultimately going to depend on what type of player you are.

At the end of the day Democracy 4 is in many ways what you would expect it to be. Basically the game lets you run your own government implementing your chosen policies. For this reason the game has a pretty specific target audience. If you don’t care or care very little about politics there is no reason why you will enjoy Democracy 4. Political junkies or at least those that have a moderate interest in politics will likely really enjoy the game though. The game has a lot of different policies to implement which also let you choose the intensity of the policy. You can really craft whatever government you want making sure to mind the budget, your voters’ wants, and domestic threats. For this reason though the game has a learning curve for those not familiar with the franchise.

My recommendation for Democracy 4 is actually pretty simple. If you don’t care for politics there really isn’t anything about the game that will likely intrigue you. Those who are at least somewhat interested in politics though and want to run their own government will likely enjoy Democracy 4 and should consider picking it up.