A while ago I took a look at the card game Exploding Kittens. While the game was kind of basic, it was still enjoyable as it succeeded at being a quick and easy game that anyone could enjoy playing. The success of Exploding Kittens basically launched the Exploding Kittens publishing company. Most of the company’s games have focused on the Exploding Kittens franchise, but they have also branched out with a couple other games as well. Arguably their most popular game is the game I am looking at today Throw Throw Burrito. While I never thought the game was going to be fantastic, how could you not want to at least try out a game where you play a game of dodgeball with foam burritos? Throw Throw Burrito is really silly and won’t be for everyone, but it succeeds at creating an experience unlike anything I had ever played before.

How to Play Throw Throw Burrito

Throw Throw Burrito is played in real time where all of the players play at the same time and can play cards as fast or as slow as they want. To start a round one of the players will say “3, 2, 1, Burrito”.

As this player doesn’t have three of the same card in their hand, they will choose one of the cards to discard. They will then be able to draw a new card from their draw pile.

The objective of the game is to acquire three matching cards in your hand at a time. When you acquire a set of three matching cards you will place them face up in front of you in your scoring pile. You will then draw three new cards from your Personal Draw Pile in order to replenish your hand. If your Personal Draw Pile ever runs out of cards you can take cards from the Community Piles in the middle of the table. 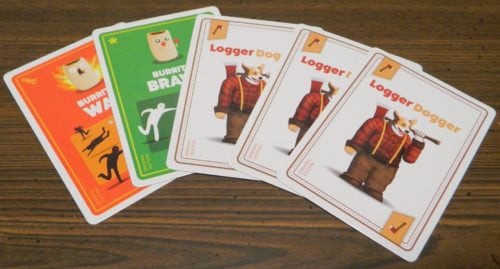 This player has three Logger Doggers in their hand. They can set these three cards aside as they will score them one point at the end of the round. The player will then draw three new cards in order to get back to five cards in their hand.

In Throw Throw Burrito there are two types of cards. There are normal cards (white background) and Battle Cards (color background). When you play a set of normal cards nothing special happens until the scoring phase. If you play three Battle Cards though a special action occurs. That action depends on what set of cards you play. When a player plays three matching Battle Cards they will call out the type of cards they played and all of the players will stop what they are doing.

After the battle concludes the Burritos are returned to the table. The first player in the battle that gets hit by a Burrito will take one of the Burrito Bruise tokens in order to indicate that they got hit by a Burrito. The player who played the cards that started the battle will count down “3, 2, 1, Burrito” and the game will resume from where the players left off. 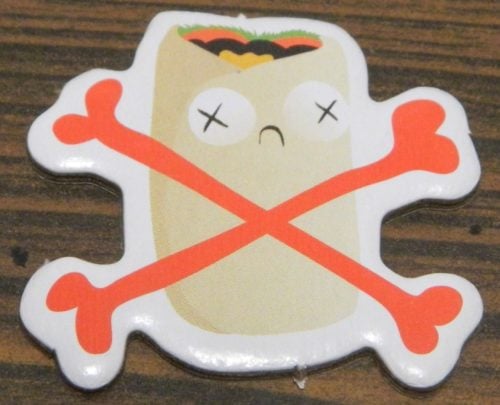 This player has received a Burrito Bruise which indicates that they were hit by a Burrito in the game.

Some rules about battles are as follows:

There are two different sets of Brawl Cards with different colored backgrounds. To play three of these cards all of the cards must have the same background color. 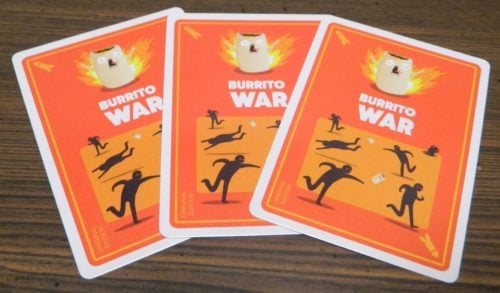 In a War all of the players who didn’t play the cards that initiated the War will compete. The first player to get hit with a Burrito will take a Burrito Bruise token. 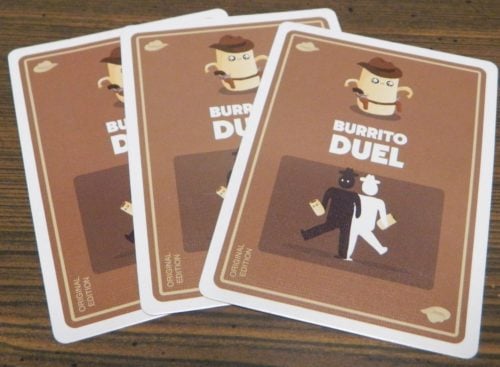 The player who played the cards will get to determine which two players will compete in the Duel. They can even choose themselves. For the Duel each player will take a Burrito and stand up. The players will stand back to back. They will say “3, 2, 1, Burrito” taking one step away from each other with each word. When they say Burrito they can start throwing their Burrito at the other player. The first player in the Duel to get hit by a Burrito will receive a Burrito Bruise.

The first round ends when all of the Burrito Bruises have been taken by one of the players. 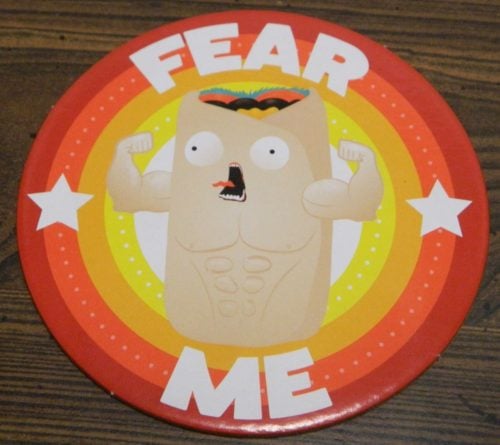 This player received the Fear Me Badge indicating that they won the first round of the game.

Another round will then be played in the same way.

If you are playing the game in a small room, before players are able to throw a Burrito they must pass it between their hands behind their back. This rule doesn’t apply to Duels.

My Thoughts on Throw Throw Burrito

When I look at Throw Throw Burrito I basically see two different games that were mashed together in order to create one of the silliest games that I have ever played.

Lets begin with the card game mechanics. For the most part the card game mechanics in Throw Throw Burrito are pretty similar to your typical set collecting game. Basically the objective of this mechanic is to get three cards of the same type in your hand at a time. When a player does this they can set the cards aside in order to receive points at the end of the round. The one thing that somewhat differentiates this mechanic from your typical set collecting game is the fact that the game also relies on a speed mechanic. Players don’t take turns in the game as they discard and grab cards as quickly as they can. Therefore the key to doing well in this aspect of the game is quickly choosing which cards to keep and which ones to get rid of as you try to acquire sets of three.

As I am a pretty big fan of set collecting games, I can confidently say that the card game elements of Throw Throw Burrito aren’t particularly original. Even adding the speed element doesn’t really differentiate the game all that much as games such as Giant Spoons utilize a very similar premise. This element of the game is far from revolutionary, but that doesn’t mean that it isn’t fun to play. The game is far from deep as there isn’t a lot of strategy to the game. Outside of remembering what other cards are in the rotation between the players, you usually are better off keeping sets of cards that you already have two cards from so you can quickly get the third card to score the set. There is quite a bit of luck to the game as the cards that are dealt to you play a large role in the game. Much of the skill in the game comes from how fast you can analyze the cards in your hand and figure out which to keep and which to discard.

I think the card game element succeeds due to a couple of reasons. First I think the speed and set collecting mechanics work well together. The set collecting is straightforward enough that you don’t have to waste too much time figuring out what cards you want to keep. This leads to a fun little speed game as you try to quickly go through cards to find those that you need. The game’s simplicity also makes it quite easy to play. The game has a recommended age of 7+, but I honestly think children even a little younger wouldn’t have much trouble playing the game. The game also plays quite quickly with most games only taking 15-20 minutes.

While I found the card game mechanics to be fun, the element of Throw Throw Burrito that will initially intrigue most people are the dodgeball mechanics. The dodgeball mechanics are in many ways what you would expect them to be. Instead of throwing balls at one another, players will throw foam burritos at each other with the first player to get hit losing a point. This element of the game is triggered whenever a player plays a set of three cards for one of the three types of battles.

So I will admit that this element of the game is likely going to be the part that is the most contentious between players. Some players are likely going to love the dodgeball mechanics while others will probably hate them. Simply put the game is far from serious. How could a game where players throw foam burritos at one another be anything different. Players enjoyment will likely heavily depend on how much they feed off the game’s silliness. The game has very few rules on how you approach the dodgeball mechanics. You can try to just throw and hit the other player with a burrito before they can hit you. Other options include running away, hiding behind furniture or other players, or even using objects in order to block burritos that are thrown at you. Those that embrace the silliness will likely love the game, while those that can’t be bothered to do anything more than the bare minimum probably will find the game to be too silly to enjoy. To get the most out of the game you need to have a group that fully embraces the silliness.

To fully enjoy the dodgeball mechanics you need more than just the right group though. First as you will be throwing burritos around you need to make sure you are playing in a room with no breakables. The foam burritos themselves don’t do much damage, but if they are thrown hard enough they could break objects. You also probably want to try to play in a larger room. If you play the game in a smaller room it is going to be hard to dodge burritos. In this case the game mostly comes down to which players can react faster and throw the burrito quick. While still fun, this takes something away from the game as you can’t really embrace the whole dodgeball concept.

Should You Buy Throw Throw Burrito?

When I first saw Throw Throw Burrito I honestly thought it was one of the weirdest concepts for a board game that I had ever heard of. The game is built around dodgeball where players throw burritos at one another. This dodgeball mechanic definitely succeeds at making the game stand out. If players really get into the mechanic and play in a large enough room it can actually be quite fun. There are going to be plenty of players that think it is just silly though which will really hurt their opinion of the game. Outside of the dodgeball mechanics the game features a speed set collecting mechanic. This mechanic isn’t particularly deep or original, but it is simple to play and can be quite fun.

My recommendation for the game comes down to your thoughts on the premise. If the dodgeball premise doesn’t really intrigue you or you aren’t really into speed set collecting games, you probably will find Throw Throw Burrito to be a silly game that doesn’t really hold your interest. Those that like the game’s silly premise though will likely love the game and should seriously consider picking it up.