At the beginning of the game every player gets 4 cards. Each player’s turn starts with rolling the dice and moving their playing piece the corresponding number of spaces. The player will then do one of the following depending on what space they landed on.

There are two additional ways to score a point other than landing on a score space. If you end up getting your playing piece caught in a loop, you receive a point and your piece is stopped at the space furthest along the path. The other way to get a point is to roll two sixes. 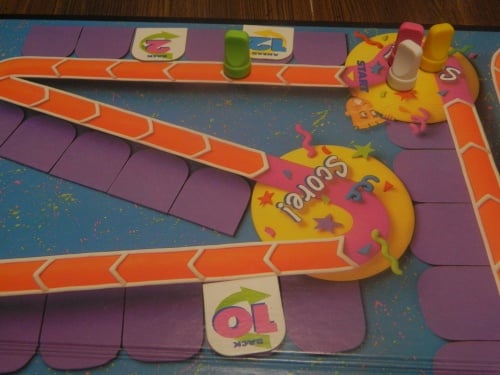 Whoever reaches 12 points first is the winner.

Generally speaking, I don’t like roll and move games. I usually don’t like them because they rarely have any strategy to them. You roll the die or dice and more your playing piece around the gameboard. This continues unto someone becomes the winner. Unless you have somehow come up with a way to consistently roll the number you desire, you really can’t impact the outcome of the game.

This Game is Bonkers is at its’ core a roll and move game. You roll the die and move your playing piece the corresponding number of spaces. This Game is Bonkers tries to do something new by giving players the ability to alter the gameboard by adding cards that change how a player moves around the gameboard. The idea of altering the gameboard is actually an pretty interesting idea. Unfortunately the mechanic never really pans out and This Game Is Bonkers suffers because of it.

The mechanic of adding cards to the board doesn’t work because success with altering the board comes down strictly to luck. There is really no way to plan ahead which means you really can’t implement any strategy. You are unable to predict where your next roll will take you or what cards other players will play. Therefore you can only make a move that will help you on your current turn. The only strategy you can implement is to go through all of your cards to try and find a card that will take you to one of the scoring spaces.

Each time you play a card to help yourself reach a scoring point you end up helping all of the other players as well. Since the cards stay on the board for the entire game unless a tile is played to remove them, in every future turn one of your opponents may piggyback off the scoring path you just created. It is actually quite likely that all of your opponents will benefit off your path at least once. If they end up landing on the space more than you do, you actually end up giving them more points than you earned in the first place.

The game’s other big problem is pacing. The game begins pretty slowly. You will rarely score points in the early turns. Cards on the board usually lead to players landing on scoring spaced. Therefore the early turns are mostly used to get cards on the gameboard. As the game progresses more cards will be put into play. As cards are put into play, more scoring spots are built into the game since the cards played will direct you towards a scoring spot. Once a lot of these scoring tracks are put into play it becomes almost impossible not to score each turn. If you are not in the lead or near the leader at this point you will not win. In the game I played pretty much every player scored on their last five turns. This made it pretty much impossible for anyone to catch up in the game since the player that got an early lead easily won.

This Game is Bonkers is not a great game. I give the game credit for trying something new with the genre but it just doesn’t work as well as it could have.With that said I had some fun with the game. I kind of liked trying to create loops on the gameboard. The game is easy to learn and quick to play. It is better than quite a few roll and move games. The game is just kind of boring though which is why I don’t plan on playing the game again.