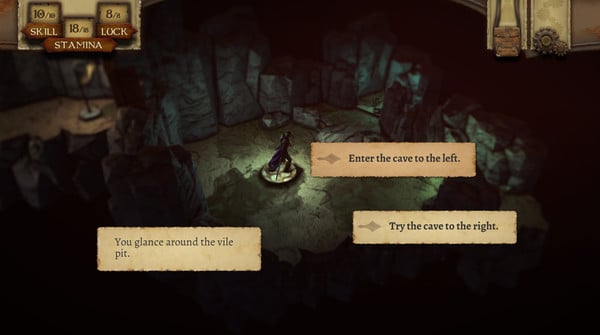 Based on the 1982 Fighting Fantasy paperback book created by Ian Livingstone and Steve Jackson, The Warlock of Firetop Mountain follows a group of heroes who enter Zagor’s lair in order to complete a quest and defeat the evil wizard Zagor. To begin your adventure you choose a hero to enter the mountain. Your goal is to fight your way through the mountain killing the creatures that stand between you and your mission.

Warlock of Firetop Mountain is basically a one player tabletop RPG turned into a video game. For most of the game you travel through the mountain and are presented with information about your surroundings. You are then presented with options on how you would like to proceed which include which path to take, whether to attack a creature, whether you would like to further explore a given area, among other options.

While most of the game involves choosing which action to perform, the game does have the occasional combat when you encounter creatures. The combat takes place on a grid gameboard and is turn based. Your character and all of the enemies perform their actions at the same time. Basically your options on a given turn include moving around the grid, performing a normal attack, or performing a special attack which has a cooldown period. Basically you try to move your character around the grid so you can hit the enemies without taking damage yourself. If you attack an enemy and they don’t attack you, you will damage the enemy and vice versa. If you and the enemy attack each other at the same time, both characters roll dice and add the number they rolled to their strength in order to determine which character takes damage.

Overall I found the combat in Warlock of Firetop Mountain to be pretty good. The combat is kind of simplistic but it works well for the game. Basically you need to try and outmaneuver the enemies. The combat is easy to learn and as you play the game you begin to learn the attack patterns of the enemies. I wish there was a little more complexity to the combat but it does its’ job well enough. The enemies are sometimes hit or miss though. Sometimes the enemies are pretty stupid and pretty much let you kill them since they just move back and forth and don’t really attack you. It is also pretty hard to fight a large group of enemies because no matter how good you are at the combat you will take a lot of damage.

You should be pretty successful in a lot of your early fights but you will eventually end up dying. You will get killed in combat or will fall into a trap that kills you. To begin each game you receive three resurrection stones. These allow you to revive your character which takes them back to the last checkpoint that they reached. When you run out of resurrection stones your game will end and you have to start your whole adventure over. You do receive “souls” for every creature you kill though which you can use to purchase new characters to take into the mountain.

While I had a lot of fun with Warlock of Firetop Mountain, this is the one area of the game that I didn’t really like. I generally am not a big fan of rogue-like games though. I am not a huge fan of the genre because I don’t like losing a lot of progress when my character dies. I would rather continue the journey instead of having to repeat content that I had already played. If you are a fan of rogue-likes this isn’t going to really be an issue for you but if you don’t like the genre this could be a problem for you.

A lot of rogue-likes make up for the fact that you have to start over by making the levels randomly generated so you don’t have to replay the same content. That is not the case in Warlock of Firetop Mountain. The content seems to be the same for the most part when you replay the game. The content does change some when you use different characters since they have different skills and approach situations in different ways. The game also has a few different paths through the mountain so you will be able to take a couple different paths to make each adventure a little different. You will eventually encounter the same situations over and over again though which kind of takes away from the game since you already know how to address certain situations. Each time through the mountain you learn from your mistakes and make it further into the mountain. Eventually you will find the best path through the mountain and beat the game but I wish there wasn’t so much repetition in your journey to get to that point.

So as I mentioned earlier I haven’t finished the game yet. I have played through the game two and a half times and tried to take different paths each time. In my first attempt I got through a decent amount of the mountain. In my second attempt I made it pretty far and it actually felt like I made it pretty close to the end. In my third playthrough I am currently pretty far into the mountain. So far I have played the game for around four and a half hours. I would say it is hard to judge how much playtime you can get out of the game. The game has sixteen different characters (some are coming soon) so if you play the game with each character and explore each player’s journey you could get quite a bit of time out of the game. If you don’t want to repeat a lot of content though you might get quite a bit less time out of the game.

Graphic wise the game isn’t the prettiest game ever made but I really like the game’s style. The game does a good job with the miniatures and the world itself. It feels like you are playing a tabletop adventure game. The game apparently includes over 100 different hero and monster figurines to check out. If you like miniature games I think you will really enjoy the graphical style of The Warlock of Firetop Mountain.

The Warlock of Firetop Mountain