Insert batteries into the dragon and place it onto the center of the gameboard. Each player chooses an explorer pawn and places it on the cave entrance space. Place a red jewel on each space with a red dot on it and a blue jewel on every space with a blue dot. Place the golden eggs on the egg space. All of the players roll the die with the player rolling the highest number getting to go first.

To start a player’s turn they roll the die and move their pawn the corresponding number of spaces. While moving a player can move in either direction. The player must move the full amount of their roll except when they move to the cave entrance and the egg space which immediately stop a player’s turn. A player may not enter the path to the golden eggs until they have collected a jewel of each color. 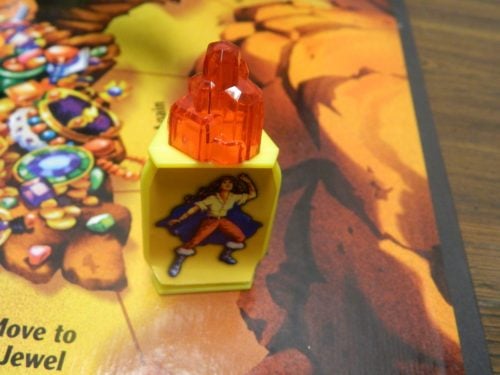 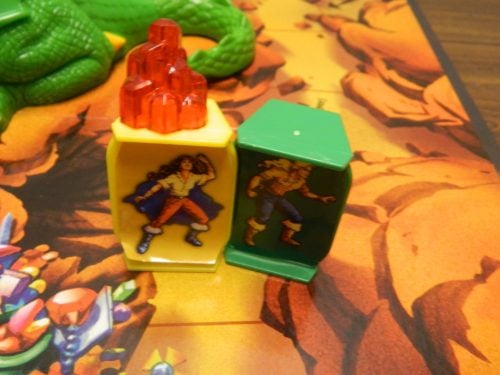 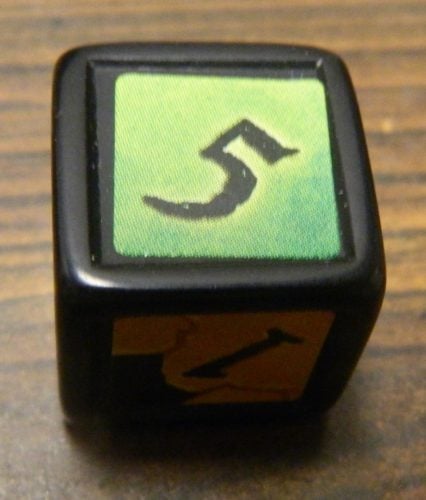 The player rolled a five so at the end of their turn they must turn on the dragon.

Any jewels or eggs knocked off a player’s pawn by the dragon are placed on the board on the space where the player lost them. 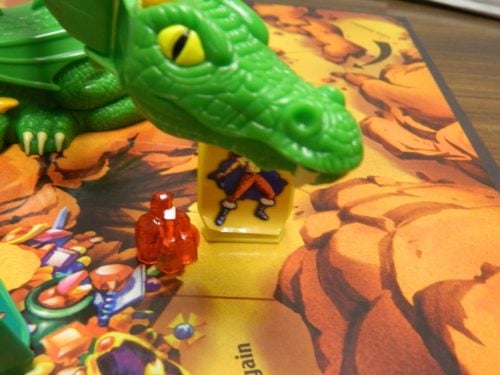 The player must leave the space on their next turn but can then return to the space on a future turn to retrieve the jewels or eggs. 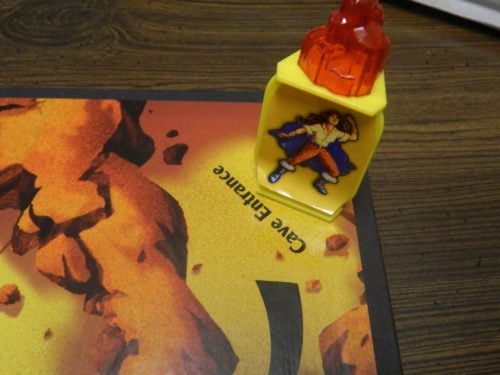 The player can no longer lose jewels after they have been taken out of the cave. When a player has acquired both types of jewels they can try to acquire the golden eggs. The player moves to the entrance to the eggs and places their two jewels on the entrance to enter the path. 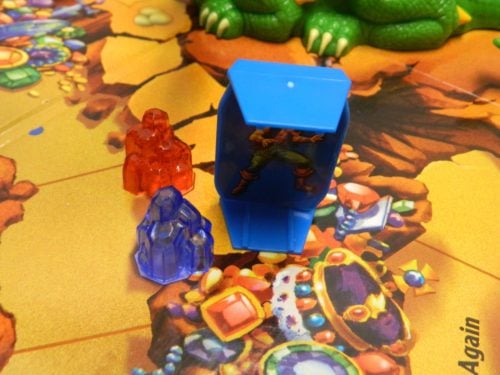 The blue player has reached the path to the eggs and thus places their two jewels on the path in order to enter the path.

Their turn then ends but no other players can access the passage to the eggs. The player continues to move down the path to the eggs until they reach them. They put the eggs on their pawn, slide back to the normal path, and then their turn ends. Once a player has brought the eggs onto the main path all of the other players can steal the eggs (without having gathered both jewels) by landing on the space with the eggs on it or by landing on the space that allows them to steal the eggs.

The first player to bring the golden eggs to the cave entrance wins the game. 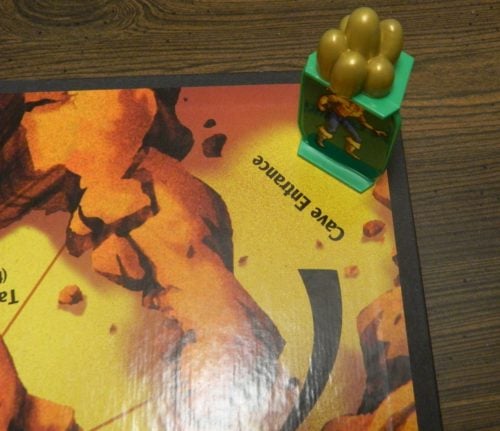 The green player has brought the eggs back to the cave entrance so they have won the game.

When you look at Dragon Strike the first thing that catches your eyes will probably be the motorized dragon. I have to say that is the first thing that stood out to me. I have to admit that the dragon is a pretty cool component. It is surprisingly fun to watch the dragon’s head whip around as you wait and see if it will knock jewels off of players’ pieces. The dragon is cool because it is designed where the dragon’s head can flip in any direction at any time. The dragon’s head could look like it is going to hit your pawn and then switch directions at the last second.

Unfortunately the cool dragon is about all Dragon Strike has going for it. Dragon Strike feels like Milton Bradley came up with the idea for the dragon and then forgot they actually had to make a game to go with it. Dragon Strike is a very generic roll and move game that has broken rules that makes it a pain to play.

The biggest problem with Dragon Strike is that pretty much 80-90% of the game is pointless. You spend most of the game moving around the gameboard collecting jewels which you need to access the dragon eggs. The problem is that you don’t really even need to collect the jewels. The only benefit of collecting the jewels is that you can then be the first player to grab the eggs. This is kind of pointless though since once a player has retrieved the eggs any other player can steal them. The game has spaces that allow you to steal the eggs, players can land on the same space as the player who has the eggs or the dragon could end up knocking the eggs off from the top of the player’s pawn. I honestly don’t know if it is even possible for the first player to grab the eggs and bring them back to the cave entrance without losing them at least once.

The problem is that once a player grabs the eggs, all of the other players are going to position themselves between the player with the eggs and the cave entrance. Players will also surround the space that allows you to steal the eggs. Once a player gets both jewels there is no reason not to get your pawn ready to steal the eggs from the player who grabs them. With all of the players trying to steal the eggs, every player has just as good of chance of winning the game despite how well they do in the first part of the game. To illustrate this I actually ended up winning the game despite not moving a single jewel out of the cave. I got lucky that a player lost the eggs just a couple of spaces from the exit and I was able to pick them up and take them to the exit. Basically I did nothing in the entire game and yet I still won.

I just think it is a stupid idea to create a game where it doesn’t really matter what you do for most of the game as long as you are lucky at the end of the game. Honestly the game should have just cut the whole idea of the jewels out of the game and just had a race to see who could get the eggs out of the cave. The game would be really short and still not very good but you wouldn’t have to waste a bunch of time with pointless action that means nothing for the final outcome of the game.

Dragon Strike is entirely reliant on luck. You need to roll well, avoid other players stealing from you, and not having the dragon knock over jewels and eggs from your pawn. The luckiest player will always win Dragon Strike because there is no real strategy in the game.

While the dragon is pretty cool it adds a lot of luck to the game. Some people will get lucky and not have their jewel knocked off while others will have their jewels constantly knocked off. In the game I played two players always had their jewels knocked off before they ever got a second turn with the jewels on their pawn. The other two players had a little more luck but still struggled since the dragon is very efficient in knocking off the jewels. You are unlikely to move a jewel or the eggs very far unless you are very lucky. Basically the game is an exercise of slowly moving the jewels closer to the exit until someone gets lucky enough to actually leave the cave with a jewel.

So it should not come as a surprise that I did not enjoy Dragon Strike. Basically the game is broken since your decisions have very little impact on the final outcome of the game. Unless you like games that rely purely on luck, I don’t see you getting a lot of enjoyment out of Dragon Strike.

While I did not enjoy Dragon Strike at all, I can see younger children enjoying the game quite a bit more than I did. The game is simple and I think young children will really enjoy the dragon. Younger children also won’t mind the terrible endgame which makes the rest of the game pointless. The game may work in a family setting but I wouldn’t recommend the game to any adults if they aren’t going to play the game with younger children.

Dragon Strike is the perfect example of a game based off a component instead of actual gameplay. While the dragon is pretty cool, there is next to nothing else to the game. The gameplay is dull and relies almost entirely luck. It doesn’t hurt that the first 80% or so of the game is totally pointless since once one player has grabbed the eggs, any other player could easily steal the eggs and win the game without actually doing anything to deserve victory. Outside of playing the game with young children I can’t see any adults getting much enjoyment out of the game. If you have young children that would be interesting in the theme it may be worth picking up Dragon Strike. Otherwise I would stay far away from it.

Thats not a very good assesmant I am 44 and love this game best of all kids can play it with grown ups .. the theme is really fun. And like any game if you dont like a rule siply change it. we play you cant steal eggs unless you have gained bothe stones or land on the steal egg space.. the dragon is really cool and this game is all about luck which mean any age can with out using any hardcore strategy.. If you a are a fan of dice roll and move games pick this one up definatly the dragon is a blast to watch also . The random swing movement across the playing board plays in for alot of suspence

I respectfully disagree with your opinion of the game. I will say that I didn't play the game with any children so that may have had an impact on my opinion of the game. When I rate games I rate them based on the printed rules as it would be unfair to grade a game based on changing them with house rules. Theoretically you could make any game good or bad if you added enough house rules to fix all of the problems with the game. I agree that the dragon is actually pretty cool. I just wish the designers would have surrounded it with better mechanics. I don't mind that the game has some luck involved but I like games where it feels like the whole game matters instead of just the ending. I have played over 700 different board games and in my opinion Dragon Strike is one of the worser games that I have played. Dragon Strike has some interesting ideas that could have become a decent game but it has too many problems to overcome as well.

If you have younger kids to play the game with and like simple roll and move games, I could see you enjoying Dragon Strike. I think you will need to come up with some house rules to fix some of the game's problems though. I personally think there are a lot of board games that are considerably better than Dragon Strike though.