To begin the game each player takes a set of two starting cards, one money card, one pass card, and one score sheet. The dealer shuffles all of the “china” cards and separates the cards into stacks of ten. The dealer assembles the deck by alternatively placing a scoring card and then one of the stacks of ten cards. Once the deck has been assembled, the top five cards from the stack are placed face up on the table. The dealer then shuffles the bull cards and places the top five face up on the table.

During a player’s turn they must perform one of the following actions:

Each of the above china cards are worth the number of points printed on the card.

When taking a bull card, a players’ china is destroyed as follows: 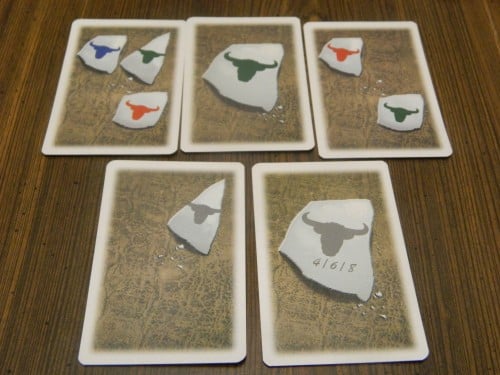 Use A Pass Card

When a player takes the last face up china card and the top card on the china deck is a score card, scoring commences. During the game there are four different scoring periods. Players can score points in four different categories. Each category can only be used once during each game. Each card that is scored is worth the number of points printed on the card. The different scoring categories are as follows:

After scoring five new china cards are put out and play continues. Players keep their china cards after scoring to be used in the next round. After the fourth round of scoring the game ends. Whoever has scored the most points between all four rounds is the winner. If there is a tie, the player with the most china cards wins.

The scoring system is one of the most interesting parts of the game and it drives most of the strategy. Usually in a card game you want to pick the highest valued card. Due to the four different scoring categories you will be looking for different things each round. Usually you will have to target a category when the round begins so you can focus your time on maximizing it. For the highest and lowest card in each color you need to try and get at least one card in every color. Generally I would score the lowest card in each color first unless you have a very low and a very high card in one of the colors. For the every card of one color category you need to focus on the color with the most cards available. Finally for the category of all cards you need to just take the highest valued china card available and try to maximize the number of cards in your hand. When you first start playing the game you think you will have a lot of cards at the end of the game but you won’t so you may want to use the all cards category whenever you have a good round.

The other interesting part of the game is the bull vs. china cards mechanic. The game is built around the fact that you are trying to build up your china collection but in order to pay for it you need to destroy some of your china. It’s a unique mechanic where you need to decide whether you are going to take your punishment (bull card) now or if you are going to stall for as long as possible. This mechanic is interesting but is also kind of frustrating since it feels like you never make any progress. As soon as you have acquired some china you end up losing it to a bull card.

You may want to have a choice over when to take a china or bull card, but that decision is highly dependent on how many money cards you have. If you have no money cards you will have to take a bull card unless you still have your pass card. On the other end of the spectrum you may have to take a china card that you don’t really want due to already having two money cards. Unfortunately both of these rules are important for the game. Obviously the game needed to have a way to force you to take bull cards or the game wouldn’t have been much fun. The limit of two money cards is also necessary or players could take advantage of a situation where they have no china cards. A player would have been able to keep taking bull cards and getting a lot of money cards. After having acquired enough money cards the player would then not have to take anymore bull cards for the rest of the game.

Not surprisingly luck plays a big role in the outcome of the game. While you do have some control over when you can take bull or china cards, you are not completely in control. You could save up money in order to purchase china in the next round only to find out that there are no good cards available in the next round. You could also be forced into a situation where you need to take the last face up bull card which eliminates all of your china cards.

Another area where luck enters the game is in turn order. Turn order is very important in the game and could easily determine who ultimately wins. If you are lucky to be the first player to play after either the china or bull stacks are refreshed you are in a good position. If you need money you will likely find a bull card that will either take only one or none of your china cards. If you are looking for china you get the first pick from the new cards so you will get the best card.

In general there is a lot of volatility in Bull in a China Shop. You can have a lot of china cards and by your next turn you may have none left. As I started playing the game I thought players would slowly gather more and more china and would have quite a few at the end of the game. There is not how the game plays though. Since a player needs to draw a bull card at least every three turns, you don’t keep cards for very long. At most points in the game you will have between one and three china cards. The most anyone acquired at one time during the game I played was five. Those five cards were quickly gone as well.When I started the game I was positive that it would be best to try and keep the skip card until the final round since I thought it would be best used there in order to maximize my score in the last round. Due to losing cards so quickly I actually think it is best to use in the round that you think will be your best. If you wait too long to use it you end up wasting it since everyone else will just use theirs as well so no benefit is gained.Due to the volatility in the game, your fortunes can change pretty quickly. After two rounds I had fallen behind all of the other players due to some bad luck. At this point I thought I had no chance of winning. Until the last round you are never truly out of the game though. In the third round I got lucky and I turned my fortunes around. Based on the third round scoring alone, I jumped from last to first place and I ended up winning the game. Some people will hate this possibility for catch-up but it does a good job of keeping people in the game until the final round.

Bull in a China Shop is a pretty average card game. I found the game to be fun to play and easy to learn. It should work well as a family or a filler game. The game does have some issues though. Turn order and luck have a pretty big impact on the game. At times it also feels like you never make any progress. You gather a couple china cards and quickly lose them when you end up having to draw a bull card.

If the concept doesn’t appeal to you or you don’t really like card games, Bull in a China Shop won’t be for you. If the concept sounds interesting though, I think you will enjoy the game.