Hasbro’s “The Singing Bone” is a 2-4 player roll-and-move game based off one of tales in the 1962 MGM movie “The Wonderful World of the Brothers Grimm.” The game has a lot of problems but none of them involve learning how to play the game, even a very young child could learn how to play it. Game play is very simple in “The Singing Bone,” you spin the spinner and move the number of spaces it tells you to move. You then simply do what the space that you land on tells you to do. Play then moves around clockwise in exactly the same manner.

Simply spin this spinner, move the number of spaces it indicates, and do what the board tells you to. That’s all there is to this awful game. 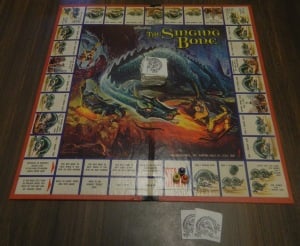 Here’s the board you move around. The spaces in the lower left corner are the dragon’s secret cave.

If you reach the end of the board but don’t have 20 dragon cards, you have to go around the board again (it’s very unlikely you will have enough on your first time around). Once you do have 20 cards and have reached the end of the board again, you enter the dragon’s secret cave where you attempt to spin even or odd numbers (based on what the next space says). If you fail, you stay where you are and try to get what you need next turn. After you have successfully spun an even, odd, and then another even number (not all in one turn), you are “ready to strike” at the dragon. On your next turn, you spin the spinner and hope that you get a 1. If you do spin a 1, you have successfully slain the dragon and win. If you don’t, you move your playing piece back to the entrance to the dragon’s secret cave and must spin for an even, odd, and then even number again (before you have a second chance at killing the dragon).

“The Singing Bone” is an absolutely terrible game, in fact it’s the worst game we’ve reviewed on Geeky Hobbies at this time. I would have given it a 0 but I save that score for games that make me angry that they even exist (usually for insensitive or insulting games like one we’re going to review soon, you’ll know what I’m talking about when you see the review). There are no positives about it whatsoever, except that it just bored me instead of making me angry.

First of all, “The Singing Bone” is a roll-and-move game which offers absolutely no strategic decisions at all. You simply spin the spinner, move your playing piece, and do what the space tells you to do (usually take 1 or 2 dragon cards). That’s the game. I occasionally enjoy games without much strategy (they can be nice “pick up and play” type games from time to time when you don’t want to play anything too complicated or long), but when you have zero decisions to make it isn’t even a real game. You might as well just spin the spinner and give the win to whoever spun the highest number. It would save you 15-25 minutes (yes, the game is that short as well).

Most roll-and-move games at least have a lot of things that can change your fortune very quickly (since they are casual children’s/family games meant to have a high luck-to-strategy ratio). “The Singing Bone” doesn’t even offer much in that area. There are a couple spaces that make you lose a turn or a dragon card or two but if you aren’t spinning well, you can fall behind pretty quickly and not have a chance to catch up. If the player in the lead has some bad luck while trying to slay the dragon, they can lose some ground but not nearly as much as you can gain or lose in a game like “Candy Land.”

The worst part of the game isn’t even the lack of game mechanics or strategy. It’s the lazy design and cheap game components that take the prize for worst thing about the game. The dragon cards shouldn’t even be called “cards,” they are pieces of paper. They all have the same boring dragon design printed on them too (a little variety in the art would have been nice). The spinner is very cheap using some less than sturdy cardboard and a standard spinning arrow. My copy of “The Singing Bone” had some slight caving which did affect the spinner a bit but even with just slight wear, it’s hard to spin it all the way around. Since this game is over 50 years old and made very cheaply (most copies will probably have even more caving than mine), expect to have a hard time consistently spinning the spinner.

Even the theming is poor. Except for the center image, the art on the board and spinner is pretty boring and repetitive. Hasbro used the same two dragon images for nearly every space, that’s incredibly lazy of them. “The Singing Bone” is a game about slaying dragons, the art and theming could have been much more epic but the people who made this game chose the lazy way out. They probably designed the entire game and all the art in a couple days.

The game is very simple to play but somehow they even failed to completely explain the rules. For some reason, there is a large space on the spinner that doesn’t have a number on it (the dragon’s mouth replaces it). The rules don’t explain what this spinner space is for or what you do with it. If I had to guess, I would say it means you spun a zero (we somehow only spun it once and just decided to have the player spin again). This is pretty nit-picky but it just goes to show you how lazy Hasbro was when making this game.

“The Singing Bone” is an awful game that has the distinction of being the worst game we’ve reviewed on Geeky Hobbies thus far. Unless you for some reason love “The Wonderful World of the Brothers Grimm” (the movie the game is based on), there is absolutely no reason to buy this game (and it would only be worth it as a collectible anyway). It’s a roll-and-move game with absolutely no strategy or unique game mechanics, the entire design is lazy and cheap, and even children won’t enjoy it because it’s over 50 years old and based on a movie probably 5% of kids have ever watched. In addition, the game seems to be pretty rare (I’ve only seen it once and I go thrift store and rummage sale shopping most Saturdays) and semi-expensive. The game isn’t even worth thrift store prices, it definitely isn’t worth it’s price on eBay.