The game begins with all players taking the two marbles of the color they have chosen to play with. The first player rolls the die and moves their playing piece counter clockwise around the board the number of spaces rolled (the start space counts as a space). The player gets to decide which of their two marbles will be moved with the die roll. The chute spaces count as spaces while moving around the board. If while moving you run into a space containing another marble, you skip over that space and don’t count it as a space moved. 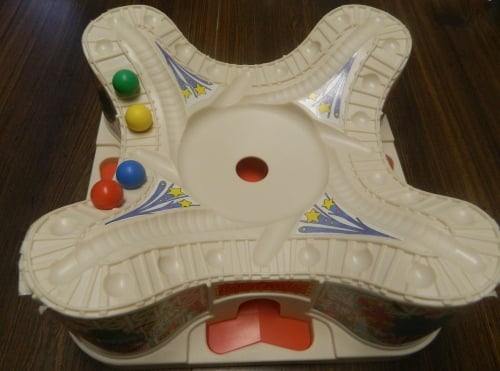 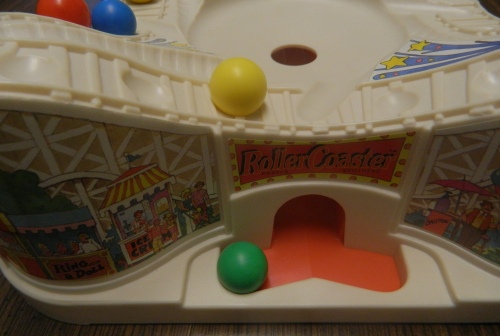 As you can probably tell if you read the how to play section, Roller Coaster is your typical roll and move game. You roll the die and move the corresponding number of spaces. Whoever reaches the finish line first is the winner. I am far from a fan of roll and move games. I don’t really like the genre since there is little to no strategy and the ultimate winner is almost always determined by luck. When I play a game I like to at least think that my decisions and strategy have at least a little impact on the outcome of the game. In roll and move games that is rarely the case. While Roller Coaster is better than quite a few other roll and move games, it is still not a very good game.

I give Roller Coaster some credit since it tried to actually do something new with the roll and move genre. Most roll and move games just plaster images of the theme on the gameboard and call it a day. In those cases the theme itself adds nothing to the game. Roller Coaster tries to add the theme to the gameplay by adding the chutes and rolling mechanics. The “chutes” mechanic doesn’t really add a lot to the gameplay , but it at least adds a little excitement to a genre that usually doesn’t have any.

The problem with the “roller coaster” mechanic is that it adds quite a bit of luck to the game and thus player’s fortunes can change very quickly. You can easily go from first to last or last to first. If you are lucky you can skip almost the entire board. In fact the winner of both games had this happen to them. On the other hand in one of the game I went from a close second place to last place, when one of my marbles was sent almost all of the way back to the start. In addition the bumping off mechanic can really impact the game. A player could bump a player off a spot close to the end and that marble might end up at the start of the track. In that situation one player could go from last to first while the other player goes from first to last.

Like most roll and move games, Roller Coaster rarely utilizes strategy. Each turn you have to decide which marble to move but there is very little strategy involved in the decision. Most of the time the decision is obvious since it is much better to move one of the marbles over the other. Otherwise you can’t really make an informed decision since you have no idea what is going to happen in future turns so you can’t plan ahead. The only strategic move you can really make is based on using other marbles in order to skip spaces. Whenever you can skip over another marble you take it since any free spaces you can get will improve your chances at winning.

The game components are pretty good. The gameboard is pretty well put together and there are no issues with the chutes. The stickers don’t seem to stick that well since most of the stickers on my copy are starting to peel off.

Overall Roller Coaster is a technically solid game. The game isn’t broken by any means but it is just boring. The chutes add a little excitement to the typical boring roll and move mechanics but it can’t save it from the tedium of rolling the die and moving your piece. This was obviously the type of game created solely for children. I didn’t play the game with any children but I would guess that children would like the game quite a bit more than I did especially if they enjoy roll and move games.