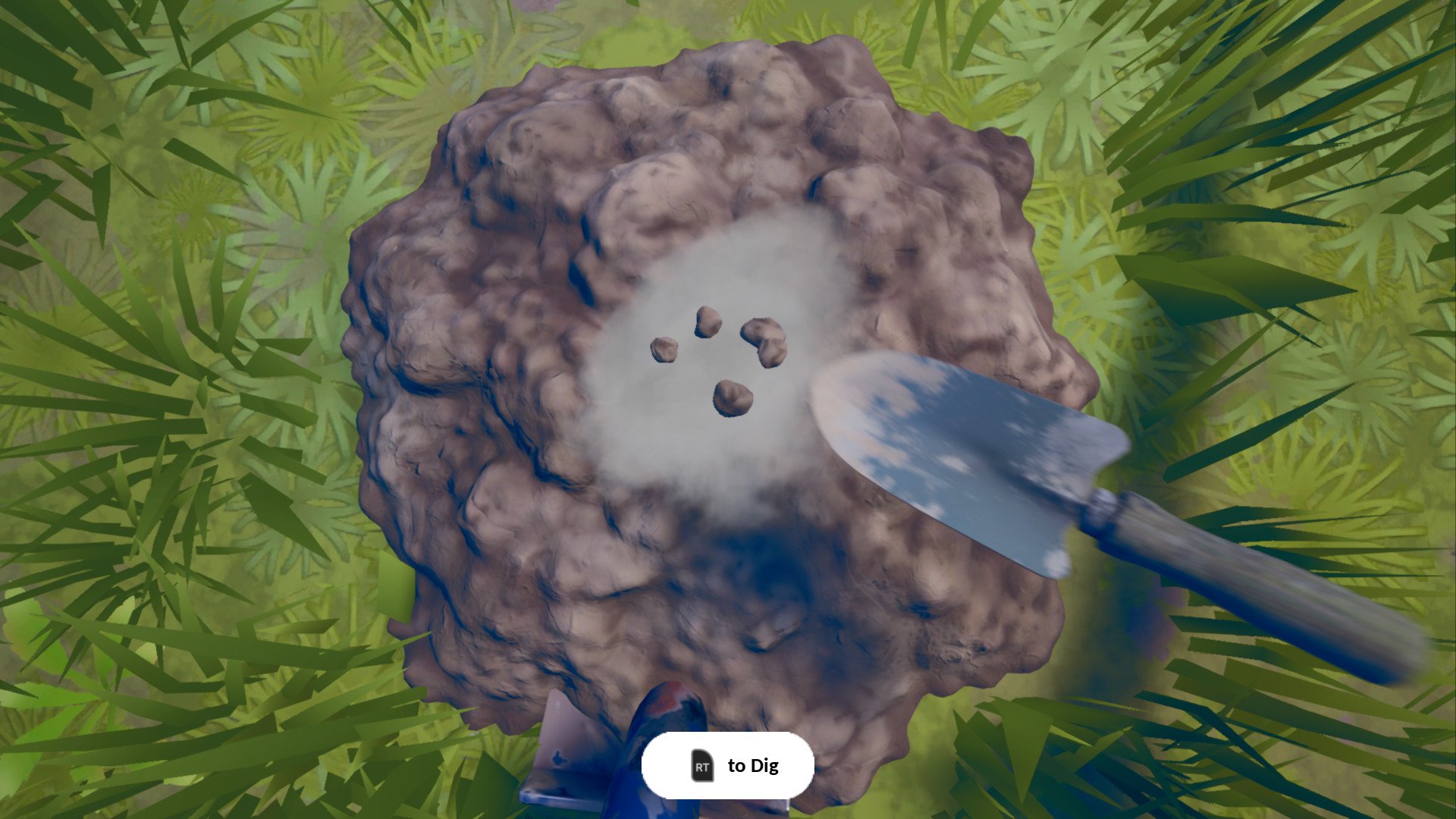 The walking simulator genre is arguably the most contentious video game genre. Some people contend that the genre shouldn’t even be considered video games as they feel more like interactive stories. Others love the genre because they tend to place much more emphasis on story than most video games. While not my favorite genre, I generally enjoy walking simulators. One of the standout games from this genre was Everybody’s Gone to the Rapture whose lead designer worked on The Magnificent Trufflepigs which released today. What initially intrigued me about The Magnificent Trufflepigs is that it implemented a metal detecting mechanic which I found interesting. The Magnificent Trufflepigs crafts a relaxing enjoyable metal detecting experience with an interesting atmosphere and story that encounters a few bumps along the road.

The Magnificent Trufflepigs takes place in the small English village of Stanning. Beth is a twenty something year old who on the surface appears to have a perfect life. She is on track to lead her father’s company and is engaged. Everything seems perfect except something is missing in Beth’s life. This brings her back to memories of her childhood when she went metal detecting with her father. One of the highlights of her childhood was finding an earring on a local farm which lead to a modest reward and some local fame. She never found the earrings match though. With the farm that the earring was found on about to be demolished, Beth decides this is her last opportunity to find the other earring. As she can’t cover the whole farm on her own, she ends up calling an old friend named Adam to help her out. Will Beth be able to find the missing earring and in the process discover more about her own life?

While it does differ from other games to a degree, if I had to classify The Magnificent Trufflepigs I would have to say that it most closely resembles the walking simulator genre. I have never been a fan of that term as a lot of people use it to dismiss these type of games, but I think it does a pretty good job describing the gameplay. The game is not like your traditional video game as it doesn’t have a lot of action and doesn’t require quick reaction times or precise button presses. In fact it is impossible to lose the game. Most of the gameplay involves walking around an English field and occasionally interacting with things you find while exploring. In many ways the game feels more like an interactive story than a traditional video game.

The thing that somewhat differentiates The Magnificent Trufflepigs from most other games from this genre is the metal detecting mechanic. This actually plays a pretty big role in the game as it is responsible for most of the actual gameplay. For those not familiar with metal detecting, you mostly walk around the fields and when the detector starts making noises you keep walking in the direction that makes the sound louder/more frequent. When you find the object you will then follow a couple simple button presses to dig the item up. The game is broken up into five days which mostly entail you searching a new field each day looking for treasure.

So I will admit that the gameplay is not particularly deep. In a lot of ways it only feels like a slight step up from your typical walking simulator game. You can’t really mess up as you will eventually come upon enough treasure to advance to the next day. Despite the simplicity of the gameplay, I have to admit that there was something surprisingly satisfying about it. The gameplay is not going to appeal to those looking for an action packed game. Those looking for a game that you can just sit back and enjoy though, should find the game pretty relaxing. I don’t know exactly what it is about the mechanic, but I actually found the gameplay to be quite satisfying. In fact if the game would ever add a mode that just allowed you to metal detect I would be interested in checking it out.

While I liked the metal detecting, I did have one issue with it. The game only gives you a limited amount of time to search each of the fields. I don’t know if it limits you to a certain number of objects found or an amount of time. The problem is with this limit you are unable to search the entire fields. Maybe it was just that I was being too thorough with searching, but on most of the days I was only able to search a half to two thirds of the fields before the time ran out. I really wish the game would have just let you search the entire field/find all of the treasures before you ran out of time. The game does have a new game+ mode which I am assuming is meant to give you the time to find the items you couldn’t find in your first playthrough, but outside of that the new game+ doesn’t really seem to change the game in any meaningful way. This design choice kind of made it feel like I was rushed while metal detecting.

Ultimately your enjoyment of the gameplay is likely going to depend on what type of gamer you are. If you are into action games or games that require skillful button presses, The Magnificent Trufflepigs is not going to be for you. Those who generally like more laid back relaxing games or think the idea of a metal detecting game sounds interesting, should have fun with the game. I will warn people that are just looking for a metal detecting game though. There are a lot of interruptions to the metal detecting as it is as much a story driven game as a metal detecting game.

With the gameplay out of the way, lets move onto the other major element of The Magnificent Trufflepigs. Like all walking simulator games, the story and atmosphere play a big role in the game. Lets begin with the atmosphere. For an indie game I have to commend the game’s overall atmosphere as it looks really good. Honestly you could spend time just looking over the many hills and valleys of the farm as you are searching for treasure. In a way it is kind of a shame that you spend much of the game looking at the ground as your surroundings are much more interesting. The game’s visuals also do a great job supporting the overall relaxing vibe that the game is going for.

Lets get to the game’s story. As the story is one of the key elements of the game, I am not going to go much into details to avoid spoilers. If I were able to give an overview of the story I would say that a lot of it is about analyzing your current life to see what truly makes you happy. The entire story is told through the conversations between Beth and Adam. Some of these come from the items you discover and others come from Beth analyzing her current life. While the story is told through text messages and the two talking over a walkie talkie, I applaud the game for its presentation. The two main characters are both interesting. The voice acting is top notch as well.

As for the story itself I think people are going to have mixed feelings. To avoid spoilers I can’t get into specifics, but I can see the story really resonating with some people while others might feel like they were lead astray. The game does throw out a lot of red herrings to trick you into thinking the story is going to go in different directions. This keeps you guessing as it takes until day three or four for you to really start to know where the story is going to end up. I can see some people really liking where the story ends up, while others will feel disappointed. I would say that I am somewhere in the middle. I might have made a few different choices, but I can appreciate what the story was trying to do. It is also well written and interesting enough where I wanted to see how it would end.

Anyone who is familiar with the walking simulator genre should not be surprised by the fact that The Magnificent Trufflepigs is a pretty short experience. It is rare to find a game in this genre that is longer than a few hours. That unfortunately holds true for The Magnificent Trufflepigs as well. The length will vary a little as each day the game gives you the option to end your search early or to continue searching for a while. Obviously if you choose the later the game will take a little longer. I obviously chose the later as I wanted to find all of the treasures. Even with searching for the maximum amount of time each day the game will still only take around 2.5 hours to complete. The game does have the new game+ which I briefly checked out. It doesn’t appear to differ from the first playthrough outside of giving you an opportunity to find the treasures you weren’t able to find in your first playthrough. If you were to 100% the game I think it would take at max around four hours. This is not particularly long and I wish the game was longer as I was enjoying the metal detecting. This is kind of expected though as few games from this genre are very long.

Ultimately I enjoyed my time with The Magnificent Trufflepigs even though there were a few things that I wish were a little better. The game is not quite your typical walking simulator, but it is very close. The gameplay is striving for a more relaxed feel as there is no way to fail and there are really no action sequences that require precise button presses. The typical walking simulator mechanics are supplemented with a metal detecting mechanic which is surprisingly satisfying. It is quite relaxing and satisfying to find hidden treasures where I wish the game had a mode where you could just metal detect without the story getting in the way. The game kind of rushes you at times as you aren’t able to find all of the treasures within one playthrough. The game’s atmosphere is fantastic as it is sometimes just nice looking around the English countryside. The story is well written and the voice acting is great. The story does go in some unexpected directions though which some people will like and others won’t. Unfortunately The Magnificent Trufflepigs is kind of short as your first playthrough should only take around 2.5 hours.