To begin the game each player takes a writing utensil and some paper to write on. One player volunteers to be the reader for the first round. The reader takes one of the cards as well as the red decoder.

Writing the Purpose of the Invention 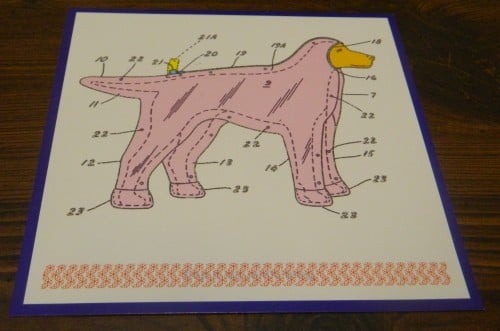 For this particular card players could come up with ideas such as dog pajamas, or a dog raincoat. The actual correct purpose of this invention is a dust cover for dogs.

Guessing the Purpose of the Invention

After scoring is completed a new round begins.

After seven rounds the game ends. The player who has scored the most points wins the game.

Simply put The Invention Game is essentially Balderdash/Definition Game/Dictionary Game for inventions. For those of you who have never played any of these games before, each round all but one of the players need to create a description of the invention for the current round. The objective is to create a description that is good enough that it will trick the other players into picking your description instead of the correct description.

Like Balderdash creativity is important for the game. If the players don’t come up with creative descriptions, it will be really obvious which one is the correct description. No matter how creative the players are though some of the inventions have such a specific description that it is pretty obvious which one is correct since no one would come up with the random purposes of some of the inventions.

The Invention Game is the type of game that is better as a game just to play for fun than playing to see who wins. The game recommends playing seven rounds but that is way too short in my opinion. It is better to just play the game for as long as you want, preferably with each player being the reader for the same number of rounds. The scoring system is just like every other one of these types of games which could be improved. You might be better off not keeping score and just playing to have some fun and laughs.

Other than being far from original, the other big problem with The Invention Game is the lack of cards. The game only comes with 80 double sided cards. Unlike with Balderdash where you can just find new words from a dictionary, you can’t really do that with The Invention Game unless you want to dig through old patent applications. While you won’t remember all of the inventions, most of them are so strange that you will have a strong indication of what every invention does after playing through all of the cards. So there isn’t a lot of replay value in the game after you have played all of the cards unless you want to create your own cards.

Other than the lack of the cards, the contents are nothing special. The pictures could be a little bigger since it is hard for everyone to be able to see the invention at the same time. Players have to pass the cards around in order to get a better look at the inventions. The text on the cards is also kind of small for some players. Even though the text is hidden behind the red sections, you can see also how long the description is so it makes it much easier to guess the correct description.