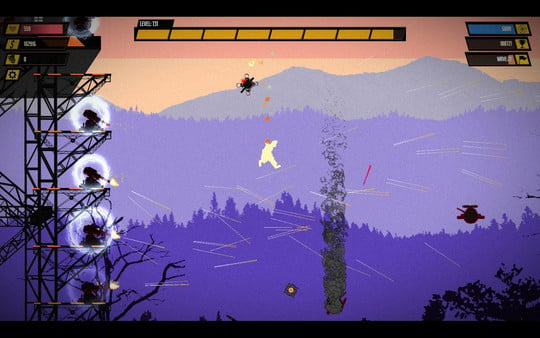 In My Tower, My Home you play as an unnamed hero. Your home, a large tower, has come under attack by robotic forces that are trying to destroy it. You aren’t going to sit back and let them destroy your home though.

My Tower, My Home is a unique blend of a traditional 2D action shooter with a tower defense game. You control the hero and are equipped with a gun which you need to use to fend off the invaders from the left and right side of the screen. You have unlimited ammo so your goal is to shoot as many robots as possible without losing all of your character’s health. Occasionally there will be weapon drops that can change your weapon if you pick them up.

You don’t have to go at it alone in My Tower, My Home though. You are able to build towers around your home in order to help you fight off your enemies. Between each wave players can go to the store in order to buy various towers that can be placed around your property. After the towers have been purchased, you can place the towers anywhere you want.

In addition to buying towers players are able to buy various defensive measures and upgrade the stats of their own characters. As players gain more levels they can unlock special abilities that can be used to give the player special abilities which include increasing the money earned, healing the player and/or home, and improving the damage of the towers or character.

My Tower, My Home plays like an action/rogue-like game. The goal of the game is to survive as long as possible. The game only includes one level so the objective of the game is to make it further in each run and increase your score. As soon as your character is killed or home is destroyed, you are immediately sent back to the beginning of the game and you lose all of the upgrades you acquired in your previous game.

Being a big fan of the tower defense genre, the thing that interested me most about My Tower, My Home were the tower defense elements. While I like most tower defense games that I play, a problem with the genre is that a lot of the games are not particularly original. Most involve placing towers and then just waiting to see if your defenses hold off the enemies. This is why I like to see when developers try new twists to the genre.

The controls for the most part work well. The towers are really easy to place since you just need to select the tower that was purchased from a radial menu which will drop the tower in your current position. Even though I wish the towers could be placed a little closer to one another, these controls work well since they let you spend less time placing towers and more time actually shooting the enemies that are encroaching on your position. The controls do a good job supporting the fast action of the game.

I also like that the game gives you plenty of ways to customize how you play the game. From the type of towers you use, to where you place your towers to even which upgrades you purchase, you can vary each playthrough quite a bit. Some strategies seem to work better than others but you can approach the game in quite a few different ways. The abilities that you can use your skill points on are the most interesting since they can actually really change how you play the game. You can focus on maximizing the money you earn which will allow you to build more towers or you could spend your points to get abilities that help your character deal more damage to the enemy.

The one thing that I have the biggest problem with is the difficulty. My Tower, My Home is far from an easy game. It is actually quite difficult. You will die a lot even if you play on the easiest difficulty. This is kind of expected since the game had to be pretty hard or you would beat the game on your first attempt and the game would get dull as you just replay the same level over and over again. I understand the need to make the game pretty difficult in order to prevent players from finishing the game too quickly.

I still feel the game is too difficult though. Even on the game’s easiest difficulty you will die a lot as you figure out a strategy to make progress in the game. Nothing carries between games so each time you die you have to start from square one. As you play the game more you begin making progress as you figure out how to build up a good defense. Even if you feel like you are doing well, you can die quickly. Just one mistake and you can be killed sending you all the way back to the beginning. Unless you focus entirely on increasing your character’s health, it is just so easy to lose all of your health quickly. If you are looking for a challenge, you will get it from My Tower, My Home since progress is really slow in the game.

While the tower defense elements are an interesting mechanic, I wish the game would have done more with them. The game has some different types of towers but not near what you would get from a traditional tower defense game. The main differences between the towers is how fast they shoot, their range, and how powerful they are. Based on my experience with the game, the sniper tower is easily the best tower due to its long range and damage.

I personally found the crates in the game to be kind of annoying. Basically the game drops crates which change the weapon of your hero and gives you cash to spend on towers and upgrades. Since the crates disappear pretty quickly, the crates force you to move around the map in order to collect them. I like that the crates force you to move around the world in order to collect them. I don’t like the crates when they change your weapons. While some gamers will like the constant change of weapons, I found it to be kind of annoying. If I could have just used the machine gun the entire game I would have been happy because I found it to be much better than all of the other guns you can get. Since the game doesn’t really tell you what weapon is in a particular crate you pretty much need to risk getting stuck with a gun that you don’t really like if you choose to pick up one of the crates.

Overall the story is pretty light. Other than a bunch of robots attacking your home, there is little backstory to the game. Unless you find out more when you make more progress in the game, you aren’t going to get much for a story in the game. This isn’t a big deal since you don’t really play these types of games for their stories. If you are looking for a story though, you won’t find much of one in My Tower, My Home.

My Tower, My Home really doesn’t have a set length. You play My Tower, My Home in order to improve your score/how long you survive rather than beating levels until you finish the game. There is only one level in the game. My Tower, My Home plays a lot like other rogue-like games where you try to get as far as you can before you die. You will die a lot and have to repeat the same parts over and over again. While the game probably has an endgame when you beat all 100 waves, that is not going to be easy to do. You won’t be beating all 100 waves anytime soon.

Since the game doesn’t really have levels, it is hard to say how much time you will get out of the game. If you don’t mind playing the same level over and over again trying to improve your score and make it further in the game, you could play My Tower, My Home for quite a while. If you don’t really like games where your goal is to just improve your personal best score, you might tire of the game pretty quickly as you repeat the same sections over and over again.

Currently My Tower, My Home retails for $6.99 and is on sale for $6.29 until March 22nd, 2016. If you don’t mind replaying the same waves over and over again trying to improve your score I think you can get your money out of the game. If you don’t like repeating the same content over and over again though I would probably recommend waiting for a sale.

My Tower, My Home is an interesting game. It has some interesting ideas blending a 2D action shooter with a tower defense game. The game controls well and is a fun distraction in one to two hour blocks. The game is difficult though. You will die a lot in the game. As you develop better strategies you will do better but you can expect to spend a lot of time replaying the same waves over and over again as you try to develop a good strategy.

If you like the combination of a 2D action shooter and a tower defense game, I think you will enjoy My Tower, My Home. How much time you get out of it will depend on how motivated you are to play the game over and over again trying to make it further/improve your score. If the concept only slightly interests you I would probably wait for a sale.

My Tower, My Home