Quick, which of these is not like the others:

If you guessed California, you’re right. Why? California doesn’t have any “keys,” unlike the other three. Figuring out the imposter and why they don’t belong is Great American Puzzle Factory’s “The Imposter!” in a nutshell.

“The Imposter!” is an extremely simple and quick game to play. Each game consists of 8 imposter cards which will have four often seemingly unrelated items, but three will actually have some sort of connection (some pretty obvious, others very obscure). One card is revealed per round and players get a few minutes to try to figure out the imposter. Then, each of the 2-10 players the game can accommodate uses their voting cards (which just say A, B, C, and D) to secretly lock in their answers.

After everyone is finished, players make their case as to why their answer is the imposter (starting with players answering “A” then moving to “B,” “C,” and “D”). If the majority agrees with their reasoning, they get a chip (even if it ultimately turns out their answer is wrong). If multiple (or all) groups make good cases, they can all earn a chip (as long as the majority agrees with them). After all players have had their chance to explain their voting, the imposter card is flipped over and the imposter is revealed (along with the real reason it was the imposter). Any player that guessed the imposter correctly gets a chip, regardless of whether their reasoning was correct. You can get two chips in a round if you convince the majority and guess the right imposter, just one if you only guess right or are convincing, or zero if you are wrong on both accounts. 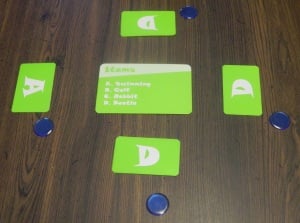 This is a sample round of The Imposter! In this example, three players thought the answer was D because there isn’t a beetle “hole” but there is one for the other three. They were technically incorrect but managed to convince the majority it was a suitable answer. The other player who said A had no idea but guessed the correct answer. As a result, all four players get a single chip (one player for answering correctly, the other for a convincing argument).

After the answer is revealed, play continues exactly the same way with the player to the left of the previous reader reading the new imposter card. After all 8 imposters have been revealed, players count up their chips and the player with the most wins.

“The Imposter!” is a simple party game which unfortunately is rather unknown. If I hadn’t found it at a thrift store for $0.50, I never would have heard of it. In fact, as of today, Board Game Geek has just 11 ratings for it. I wish that wasn’t the case because “The Imposter!” is actually a very good game that does just about everything right. No, it isn’t a strategy game with a lot of decision making and unique mechanics, but for a party game it’s very good.

Let’s get the one negative I have out of the way (which isn’t a huge negative, more of an annoyance at most). Some of the actual imposter choices are a little strange at times. For example, there is a card that lists “swimming, golf, rabbit, beetle” as the four possibilities (the example image above). Every player in the game I played quickly answered and was sure the imposter was “beetle” because every other one has a connection with “hole.” Rabbit hole and golf hole are pretty obvious and a lot of people use the term “swimming hole.” However, the imposter was actually “swimming” because the rest are Volkswagen vehicles. Accurate, yes, but that’s not exactly the most obvious or logical connection. Thankfully, the game has built in a system to mitigate these types of cards. Since all of us agreed with this reasoning, we each got one of the two chips available anyway. It just stinks that we were technically incorrect when we had what we thought was a better answer. You will almost certainly come up with some better answers than the game designer from time to time as well.

I actually like that a lot of the questions have multiple potential answers, it makes you think harder to figure out what the “best” imposter is. Sure, it can be a bit annoying or frustrating if you aren’t on the same wavelength as the game designer, but after playing for awhile you can kind of start to predict which answer is best. I also like that the card difficulty seems to vary, some are obvious as soon as the imposter card is read (there is a card about computer companies that any geek will instantly know the answer) while others require some deep thought to figure out the imposter. The cards are well-rounded, touching a lot of different subjects so every type of person should have some imposter cards that are extremely obvious and others they might struggle with (while one of their competitors locks in their answer within seconds).

“The Imposter!” is definitely an addicting game. I doubt you’ll be able to just play one game in a sitting, especially since the eight cards the game recommends will only take you about 15 minutes to complete. We just did away with that rule completely and just played as many cards as we wanted and totaled up the scores after we were done (we went through 50 cards in a single game, that’s how addicting the game can be). I would recommend ignoring the rule and just play as long as you want like we did (unless you just want to use “The Imposter!” as an appetizer game before your “main course” game).

Re-playability is a small issue with ‘The Imposter!” because once you’ve played through all the cards, you’ll probably remember a lot of them if you try to play again with repeat cards. However, you will get a lot of play time out of it and you can get copies for under $20 on Amazon (at least as of the time this review was posted). 400 cards is quite a few compared to some other popular party games. We got through 50 cards in the game we played, which took us about an hour and a half (with four players). If you do the math, you should get at least 12 hours of enjoyment out of the game (more if you are playing with a bigger group than we did). Even for a pretty frugal person like myself, that’s a pretty good value. Obviously, it doesn’t have the re-playability of the best strategy or designer games (which you could put in hundreds of hour without getting bored) but for a party game, the price-to-hours played ratio isn’t bad.

“The Imposter!” also gets points for originality. I’m sure there are some similar games out there but I’ve never played one. Another positive is that it can accommodate 2-10 players and you can easily make your own voting cards to enable even more players to play.

“The Imposter!” is quick, easy to play, and very fun. That’s exactly what a party game should be. Add in it’s originality and solid price to hour ratio, and it’s very easy for me to recommend this game. If you don’t like party games I doubt this one will change your mind but for anyone else looking for a quick, easy, and fun game to play, give it a try.