I have to admit that when I first saw the game that I am covering today, The Cat Game, I didn’t have high expectations for it. This was partially due to the outer box featuring fake cat hair. It was also the fact that the game felt like it was designed solely to attract cat lovers in order to make a quick buck. The final nail was the fact that it just looked like another generic drawing game. Honestly the only reason I ended up picking it up was that I found it for really cheap at a thrift store. The Cat Game is basically just Cat Pictionary, but due to one clever mechanic I enjoyed it more than I could have imagined.

How to Play The Cat Game

There are two different ways to play The Cat Game so you have to choose which one you want to play.

The game is played over a number of rounds with the players taking turns as the drawer.

The drawer will take the top card from the deck. They will choose one of the three categories from the card to draw. A variant rule that you can use lets the other players choose which category will be played. The categories are as follows: 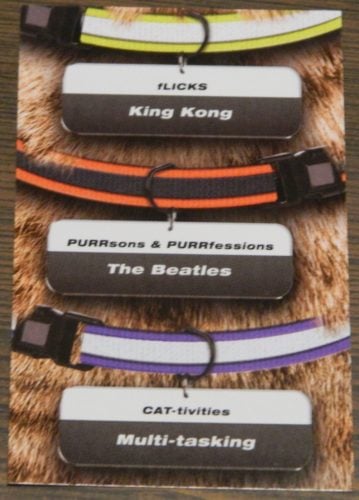 For this round the player can choose to draw “King Kong”, “The Beatles”, or “Multi-tasking”.

Once the drawer has started drawing the other players can start guessing. The first player to guess the correct word(s) earns the card. If players take too long to guess you can add a time limit where if no one guesses it in time play will pass to the next player with no one receiving the card. 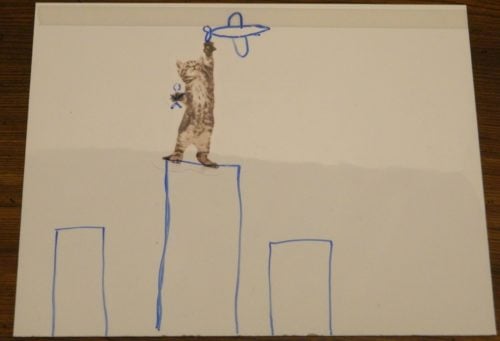 This player has decided to draw “King Kong”. The first player to guess King Kong will win the card.

The tablet is cleaned and the cats are returned to the table. The tablet is then passed to the player to the left who will become the next drawer.

The first player to earn five cards wins the game.

In Team Cats each team will draw at the same time. Both drawers will take a card and choose a category to draw. Each player will then take the cat(s) that they want to use in their drawing.

Drawing is the same as Solo Cats except that both teams will be drawing and guessing at the same time.

After both cards have been guessed correctly the tablets and markers will be passed to their teammate on the left.

The first team to score 20 points wins the game.

My Thoughts on The Cat Game

I am going to get right to the point. The Cat Game is basically Pictionary with cats. This is oversimplifying things a little, but is actually a really good description of how the game plays. Anyone familiar with Pictionary or other drawing games will basically be able to jump in right away. Basically players take turns drawing a card that features three different words. The player will choose one of them and start drawing it so the other players can guess what they think they are drawing. The first player/team to correctly guess enough drawings wins the game.

I would say that around 90% of The Cat Game doesn’t differ from any other drawing game. Outside of the obvious cat theme the only area where the game differentiates itself is the addition of the cats that you incorporate into your pictures. At first I thought that this was just a gimmick. Basically before you start drawing you will choose one or more of the 18 cat cutouts included with the game. The cats you choose will be placed behind a plastic sheet which allows you to draw on and around them without damaging the cutouts. You will then incorporate these cats into your drawing.

I have to admit that I at first thought this mechanic was kind of stupid. After I started playing the game though I have to admit that there is more to it than I first expected. As I am not really a cat person I didn’t really care that the cutouts were cats. The idea of having characters to draw around though was a really interesting addition to your typical drawing game. In fact I am genuinely surprised that I have never played another drawing game that has used this type of mechanic before. Despite being so simple it actually has a much bigger impact on the game than I originally expected.

The main reason that I liked this mechanic is that it actually gives players a framework to base their drawing around. Those that are good drawers don’t really need this as their skill gives them the ability to accurately portray the clues. For those that aren’t so good at drawing (this describes the entire group that I play games with) this actually helps quite a bit. Instead of having to draw stick figures or animals that only vaguely resemble animals, you actually have a reference point to create the rest of the drawing around. On top of this some players found some really interesting ways of utilizing the cats to represent something other than a cat. This mechanic actually makes it considerably easier to make some of the drawings than they otherwise would have been.

This is actually a theme with the game in general. Maybe we just got lucky with the cards that we ended up drawing, but we actually found many of the words to be surprisingly easy to guess. Part of this is due to the cat cutouts helping a lot more than you would expect. The other reason though is that many of the words are actually pretty easy to guess and draw. Some of the words might be kind of hard to draw, but most of the cards have at least one word that is pretty easy. As the drawer can pick which word they will draw this allows them to choose one that will be easier for them to draw. In the game we had players sometimes guess the correct answer within a couple seconds.

When most people see The Cat Game they are probably going to think that this game was made for “cat people”. Obviously those who like cats are going to enjoy the game more. I don’t think being a cat person is a prerequisite for enjoying the game though. I wouldn’t consider myself to be a cat person and yet I actually enjoyed it more than I was expecting. Outside of some theming the game is no different than any other party game. The game is really easy to play especially for anyone who has ever played a drawing game before. I think the only reason the game has a 16+ recommended age is that younger children likely won’t know what all of cards are referring to. Otherwise the game plays quickly. In fact I think the game is a little too quick if you only play with four or so players.

I was pleasantly surprised by The Cat Game, but that doesn’t mean that I didn’t have issues with the game. One of these is that the game is probably better with more players. I say this because the Solo Cats mode has an obvious flaw. Based on how the scoring is conducted there is no reason for the drawing player to actually try to draw well. In fact if the other players can actually guess the drawing they will put themselves in a worse position. To prevent this you really need to add a house rule where players have to try to draw as well as they can. Even if this wasn’t a problem I think The Cat Game will still be more enjoyable as a team game. To fully enjoy the game you will want to add as many players as you can.

The main problem with the game though is that it really doesn’t do much to differentiate itself. At its core it is just another drawing game. The cutout mechanic is surprisingly good, but the game brings nothing else to the game. I was honestly surprised that the cat theme doesn’t play a larger role in the game. Outside of the artwork, some corny puns for the different categories, and the artwork; the theme is pretty pointless. I wish other drawing games would utilize the cutouts, but otherwise the game doesn’t really do anything that I haven’t seen done before.

As for The Cat Game’s components they are basically what you would expect. The game comes with 150 cards with each having three different options. This is not horrible, but I really wish the game had more cards. I give the game some credit for the tablets as it was clever having a plastic sheet that goes over the cutout cats so you could draw on them without putting marks on them. Otherwise the components are pretty average.

Should You Buy The Cat Game?

Basically The Cat Game is what you get if you combine Pictionary with cats. Most of the game plays like every other drawing game as players take turns drawing and guessing. I was about the write the entire game off due to this fact except that the game actually has one unique mechanic that I have never seen in another drawing game before. Before you start drawing you will pick one or more cat cutouts that you will add to your drawing which gives you a framework to base the rest of your picture around. This sounds like a gimmick, but it actually adds more to the game than I was expecting. It is surprisingly fun drawing around the cats and it actually makes drawing considerably easier. I wouldn’t consider myself to be a cat lover, and yet I enjoyed the game more than I was expecting. The game is still a typical drawing game though as outside of the cutouts it doesn’t really do anything to differentiate itself.

3D Sculpture Puzzles: A Brief History, Explanation on How to Solve, and Where to Purchase