To begin the game every player takes 1 Fast Forward tile, one Yield tile, and 1 set of answer cards (ABCD). Each player takes a pawn and places it on the start space. Randomly select 24 roadblock and 8 detour cards. Shuffle the cards together and create four stacks of eight cards. Place each stack into one of the pit stop envelopes so the questions are visible. Place one envelope and one pit stop/location tile on each pit stop space.

The first round begins with the pit stop/location tile on the first pit stop being flipped over and the Phil Keoghan pawn being placed on the space. In the first round the youngest player reads the questions. The duty of reading the questions pass to the other players in future turns. All players including the reader try to guess the answer for every card. There are two types of cards which are as follows: 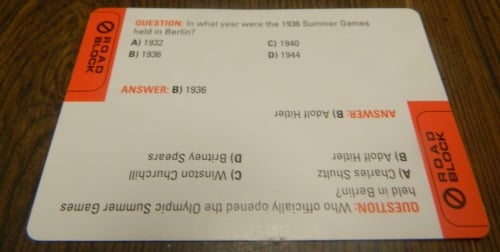 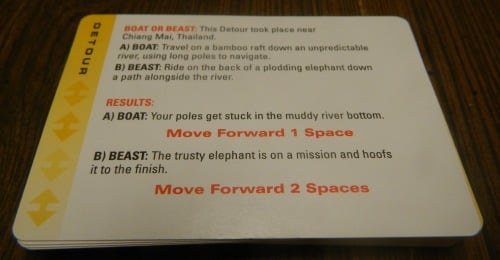 Detours: In detours the players choose between two different options. Once everyone has made their decision the results are read and each player moves their pawn the corresponding number of spaces.

If all of the cards in the envelope are used before any player reaches the pit stop, additional cards are drawn in order to complete the leg.

The Amazing Race Board Game is not surprisingly based off the CBS show of the same name. Having watched all of the seasons since season one I would consider myself a fan of the show despite the show starting to get a little old these last couple of seasons. Even though I am a fan of the show, after looking at the game I didn’t have high expectations. The game just looked like a quick cash grab. Being a fan of the show though I wanted to give the game the benefit of the doubt. Unfortunately after playing the game, The Amazing Race Board Game is not very good.

Before moving on from the road block questions I have to bring up the dumbest question in the entire game which is as follows:

In what year were the 1936 Summer Games held in Berlin?

So what do you think the answer would be? 1936 appears to be way too obvious since they were called the 1936 Summer Games after all. Why would a trivia game ask a question where the answer is presented right in the question itself? Since everyone thought the game wouldn’t include a question that was so obvious we all decided to pick a different answer thinking that it was a trick question. It turns out that the answer was 1936. I think a question that is presented like a trick question and turns out not to be a trick question is a pretty stupid question. If the answer was actually something other than 1936 it actually would have been an interesting question and would have required some knowledge of events from that time period.

So the bulk of the game is a trivia game. The trivia game is not terrible by itself (despite some stupid questions). The game goes wrong where it tries to cram other elements of the show into the game.

First are the fast forward tiles. I actually didn’t have any problem with the Fast Forward tiles. They simulate the show somewhat well and they don’t really break the game since they ultimately don’t have much impact on the game.. The Fast Forward tiles pretty much act as a way to get a question right that you don’t know the answer to. Every player will have at least one question that they don’t know the answer to so all players should be able to play their tile so no one really gains an unfair advantage.

The next element from the show is the detours. The detour cards are pretty stupid for several reasons. First of all they are pretty luck based. If you are familiar with the show and which detours are usually the best to take, you can usually guess the better option but you are ultimately only guessing. The good news is that you choice has very little impact on the game since your decision only decides whether you will move one or two spaces. The detours are really only present for theme purposes and have essentially no impact on the game itself.

Next comes the Yield (which on the show was the precursor to the U-Turn). I have always felt the Yield/U-Turn on the show was always rigged/stupid and it is no different in the board game. The Yield has the ability to punish another player way to much in my opinion. One Yield could essentially end the game entirely for one player. At least in the game I played, the final score at the end of the game was pretty close with most of the players being within a couple points of one another. The Yield could end a players’ game if one player is considerably worse than the other players. A player that is in first could theoretically Yield the player in second place and send them all of the way to the back which could be quite a few hours if one player is really struggling. Since the final outcome could be very close, the player that got yielded could almost be eliminated by that one move. The board game made a big mistake in my opinion adding the one part of the show that was messed up in the first place.

The Traveler’s Check tiles were included in the game to simulate having good luck on the race like getting a good taxi driver, getting help from a local, avoiding a traffic jam, etc. These tiles are pretty pointless in my opinion and just punish players who get questions right. Since you can only draw the tiles after getting a question wrong, players that get most of the questions right are at a disadvantage. Since you get either one or two spaces from each tile, these tiles allow you to get three questions wrong with next to no punishment since at the worst you will get one less space than the players who got the question correct. Now if some of the tiles made you lose spaces the tiles would have been better since there would be a risk/reward element to selecting them. Otherwise the game should have at least allowed anyone to take one of the tiles after any turn not just if they got the question wrong.

Overall the scoring system is fair and does a pretty good job simulating the end of each episode on the show. If you do worse than the other players more time is added to your score and you are more likely to lose at the end of the game. I think the game would have benefited with having some sort of elimination after every leg. No matter how poorly you do in the game, you get to compete in the final leg. I think the game would have better if the last player to arrive at a pit stop would be eliminated. I am guessing that the designers did not put this into the game though because they wanted to keep the game inclusive. With an elimination mechanic, the game would have been pretty boring for players after they were eliminated.

The game components as a whole are pretty solid. The Phil Keoghan pawn and the location tiles are totally pointless for the game and are only used for decoration. Otherwise the components aren’t bad. The cards are of your typical card stock. The gameboard could have been a little more interesting but it serves its’ purpose. The plastic components are thick enough that they shouldn’t get damaged.

Unfortunately The Amazing Race Board Game is not a very good game. Essentially the creators took a generic geography trivia game and unsuccessfully slapped on some content relating to the Amazing Race. If you have either never watched the show or don’t like it, you might as not even bother with the game since it is not very good and the theme of the game won’t appeal to you. If you like the show but don’t like generic trivia games, the Amazing Race Board Game is not worth your time. If however you really like the show as well as geography based trivia games, you may be able to get something out of the game.