The game is played in rounds which involves both teams getting a chance to play a side of one card. Each teams’ turn begins with the 1 minute timer being flipped over. The window covering the first puzzle is opened and the other team gives the current team the hint for the current puzzle.  The current team reads the random words over and over again in order to try and figure out the phrase the random words sound like. If the team gets the correct answer the window for the puzzle stays open, the next puzzle is revealed and the hint for the next puzzle is read aloud by the other team. If at any time the team wants to pass they are able to. If there is time left at the end they can return to puzzles that they skipped. When the timer runs out the current team records their score on the horizontal score slide. If a team gets all six puzzles correct they get two bonus points. Play proceeds to the other team who gets a minute to solve their puzzles. 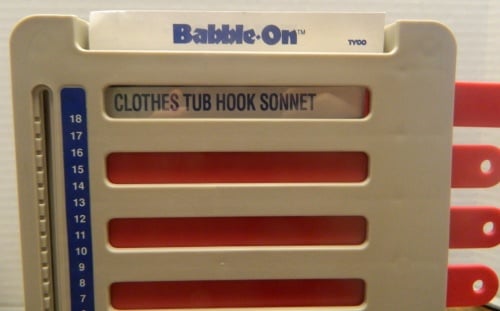 The puzzle in the picture above is “Clothes Tub Hook Sonnet”. The hint for the puzzle is that it is an expression. After reading the phrase several times players need to figure out that the phrase when sounded out gives you the phrase “Close the books on it.”

The first team to reach 18 points is the winner.

Reading through the how to play section may have reminded you of another board game. If you got a distinct feeling of Mad Gab you are not alone. As a matter of fact Babble On is essentially the exact same game as Mad Gab. Off the top of my head the only real differences are the setup/gameboards, the scoring system, and the look of the cards. If you have played Mad Gab before and didn’t care for it, you might as well stop here because you will not like Babble On. Those of you who are fans of Mad Gab should read on to see if Babble On is for you.

I haven’t played Mad Gab in quite a while so my memory of the game may be a little hazy. What I remember most was not being very good at the game. Even though I wasn’t very good at the game, I would consider Mad Gab to have an easy to moderate difficulty level. I would consider Babble On to be at the hard difficulty level. Some of the puzzles in Babble On are somewhat easy but the majority are quite difficult. Most of the difficulty of Babble On’s puzzles come from them not being as straight forward as Mad Gab’s.  In Mad Gab you could usually solve the puzzle pretty quickly since the words chosen did a good job phonetically sounding like the answer phrase. In Babble On the words chosen don’t provide as obvious of solution to the puzzle. Some of the cards my group played were so obscure that even after hearing the solution phrase it was still hard to see the answer. Babble On is not the game for anyone unfamiliar with these type of games. If you have become too good at Mad Gab though and would like a challenge Babble On may be right up your alley.

The other reason the game is quite hard is that the game doesn’t give you enough time. You need to be really good at the game in order solve more than one or two puzzles before time runs out. With the little amount of time available, you pretty much need to give each puzzle around 10 seconds before moving on. It doesn’t pay to stay on a puzzle since you are better off moving onto the next one since you might get lucky and get an easy puzzle.

In addition to the hard difficulty of most of the puzzles, I thought the scoring system for the game added unnecessary difficulty/confusion. The scoring system tries to be cute by only giving the difference in points to the winning team. This really doesn’t do anything since if you just gave the players points equal to how many puzzles they solved you would get the exact same result. Using this difference method just adds steps to score keeping that don’t actually add anything to the gameplay itself. Using the difference method also extends the length of the game. If both teams pretty much always score the same amount, very little progress will be made towards one team ultimately winning. The scoring system doesn’t hurt the game but it just adds unnecessary steps to a scoring system that are not needed.

The contents are not bad. The game comes with 167 double-sided cards with 0ver 2,000 clues so you should get quite a bit play out of the game. The display board is pretty nice even though the sliders on my copy had some trouble getting somewhat stuck at times.

My recommendation for Babble On is pretty simple. If you have either never played Mad Gab or didn’t like it, there is no reason for you to pick up Babble On since it is essentially the exact same game and it is quite a bit harder. If the concept for the game sounds interesting I would pick up Mad Gab first since it is easier in my opinion. Now if you like Mad Gab the decision comes down to how much you like the game and how good you are at it. If you are pretty good at the game and would like more puzzles to solve, you will probably like Babble On and you should pick it up. Otherwise I would recommend passing on Babble On.