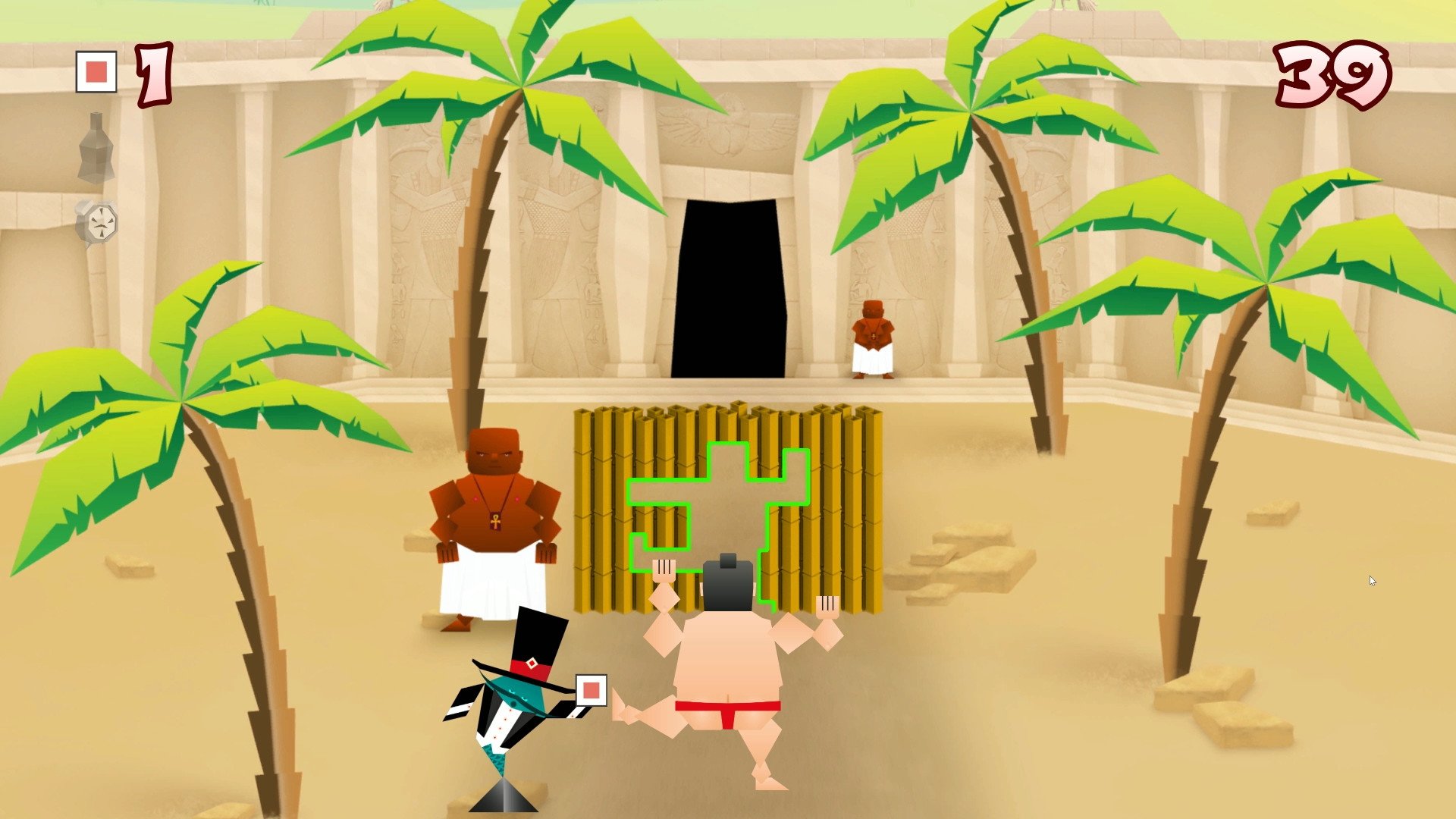 Originally airing in Japan back in 2006, Nōkabe/Brain Wall quickly became a worldwide hit. Different versions of the show were developed for 45 different countries from around the world. When it reached the United States it became the show Hole in the Wall. While the show was popular around the world, it never really ever picked up in the United States. The show was cancelled after one season before being revived a couple years later for two more seasons. I bring this up because it is immediately apparent that Tetsumo Party clearly took inspiration from Hole in the Wall. While I never really watched the television series, the game’s premise had the potential to make for a great party game. Tetsumo Party is a fun and interesting party game that unfortunately could use some more content leading to a kind of repetitive experience.

Basically anyone familiar with Hole in the Wall should already have a good idea of what Tetsumo Party is all about. In Tetsumo Party you play as sumo wrestlers and other odd characters competing in a weird game show. As you stand still at the end of a track, a series of walls with holes in them will approach your position. These walls are not to be trifled with as they will knock you out if you don’t avoid them. Instead of just moving around the walls, you need to contort your body to fit inside the holes in the wall. You need to be quick though since if you fail to fit through just one wall you will be knocked out. So how many walls can you make it through without crashing into one of the walls?

The gameplay in Tetsumo Party is pretty simple. In the game you have control over the arms and legs of your competitor. The game assigns one button to each limb. Each limb can be put into a series of different positions. You cycle through these positions by pressing the button corresponding to the limb you want to change. Before the next wall approaches you need to position each limb properly or you will crash into the wall ending your run. Outside of a couple other mechanics that I will discuss later, that is pretty much all there is to Tetsumo Party.

When I first saw Tetsumo Party I was curious about how the game would play. I am generally a fan of quirky party games. While it is not going to be for everyone, Tetsumo Party’s gameplay is pretty fun. The gameplay is really  simple as you just have to keep pressing the buttons for each limb until it is put into the right position. The mechanics might be simple, but the game is not as easy at is first appears. Tetsumo Party kind of plays like a speed matching/puzzle game as you have to quickly figure out which limbs have to moved and change the positioning of those limbs to match the upcoming wall. Generally Tetsumo Party finds a good balance between being challenging and yet refraining from being frustrating. You will fail a lot but the game is fun enough that you will want to play again in order to try and beat your previous score.

To change things up Tetsumo Party adds a couple additional mechanics that can impact how you play the game. First of all the game has a couple items that you can pick up while playing the game. Every couple of walls there will be a fish waiter that approaches your character carrying an item. If you can contort your body to reach the item with one of your hands you can use the item’s ability. First there are the clocks. When you collect enough clocks the next wall will slow down significantly giving you plenty of time to contort your body to fit into the holes in the wall. Second there is a drink that when you collect enough will make you temporarily invulnerable. The walls will come at you quicker but you aren’t punished if you run into one of these walls.

The third item in the game are cards. These cards are used to unlock new characters in the game. At this point the game has nine different characters. Outside of cosmetic differences, the characters don’t seem to play differently as all of the controls are exactly the same. Each character does provide its own unique challenges for you to complete though. These challenges include surviving for a given number of walls, collecting a certain number of items, or other challenges that force you to focus on different things. These challenges don’t really impact the gameplay all that much, but they add a little variety to the game as you are forced to emphasize different things.

The problem is that even with the challenges, Tetsumo Party doesn’t really differentiate the gameplay. Outside of getting better at the game, you are basically doing the same things over and over again in Tetsumo Party. The gameplay never really changes as the game never adds anything to change up the gameplay or make it more difficult. The gameplay is pretty challenging, but the only reward for getting better at the game is being able to survive longer. Doing the same things over and over again gets repetitive after a while. For this reason I see Tetsumo Party being more the type of game that you play for 30 minutes to an hour every so often instead of playing it for long extended periods of time. With the game only retailing for $5 though, this isn’t as big of issue as it could have been.

With a name like Tetsumo Party it shouldn’t surprise anyone that the game has multiplayer. The game has two different multiplayer modes consisting of a competitive and cooperative experience. The competitive mode is pretty self-explanatory. The players divide into two teams and each team controls their own character. Each team is allowed to hit the wall three times. Add in a couple abilities where you can mess with the other team including changing which button controls each limb. Otherwise the competitive mode doesn’t really differ from the single player. As it is a pretty basic competitive mode, your opinion of it will likely come down to how much you want to compete against another player(s).

The cooperative mode is a little different from the other game modes. In the cooperative mode all of the players will control just one character. This means that each player will be in charge of some of the limbs. The limbs that each player will control changes after every couple walls which keeps you on your toes. As you don’t control all of the limbs you need to work with your teammate(s) in order to get your character positioned before the wall arrives. While the basic gameplay is the same as all of the other modes, the cooperative mode plays a little differently. It requires some teamwork as you don’t control all of the limbs. While you can mostly just focus on your own limbs, helping out your teammates can be helpful as some players will have more work to do between walls than other players. This leads to a unique cooperative experience that people who enjoy cooperative experiences should enjoy.

Basically Tetsumo Party is what you would get if you turned the tv show Hole in the Wall into a speed puzzle game. As a wall closes in on your character you need to contort their body to fit into the hole in the wall. This involves using the buttons which correspond to each of the character’s limbs in order to change their pose so they can fit into the holes in the wall. While the gameplay is not going to appeal to everyone, I found it to be pretty fun. The gameplay is simple but fun at the same time. The multiplayer modes are also fun especially the cooperative mode where each player controls some of the character’s limbs. The biggest problem with Tetsumo Party though is that it doesn’t have much variety. While the game has different characters that you can unlock along with different challenges, the gameplay never really changes. From your first minute to your last you will basically be doing the same things. For this reason Tetsumo Party gets repetitive after a while where I would only recommend playing it for 30 minutes to an hour every so often.

Basically your opinion of Tetsumo Party is going to come down to your opinion of the main gameplay. If you don’t think the gameplay sounds all that interesting, Tetsumo Party is not going to be for you. People who think the premise sounds interesting though should have some fun with the game. Whether you should purchase now or wait for a sale depends on if you mind that the gameplay is basically the same for the entire game.