Originally airing back in 1996, Sabrina The Teenage Witch was a family comedy about a teenager that finds out on her sixteenth birthday that she has magical powers. The show was based on the Archie comic series which recently spawned another series on Netflix. While I have seen a couple episodes of the show, I can’t say that I really followed the show when it originally aired on television. The show must have had quite a few fans though as it ran for seven seasons. Like anything that was popular in the 1990s this lead to the show getting a board game aptly named Sabrina The Teenage Witch Game. The Sabrina The Teenage Witch Game has some interesting ideas for a TV tie-in game, but unfortunately none of them really work leading to a typical franchise based board game.

How to Play Sabrina The Teenage Witch Game

You will begin your turn by rolling the die (unless you want to play one of The Book cards that are used instead of rolling the die). You will then move your pawn the number of spaces you rolled. If your pawn is on a pink or yellow/gold space, you must follow the arrows on the track. If you are on a blue space you can move in any direction, but you cannot move onto the same space twice on the same turn. Your pawn can land on a space that is occupied by another player. 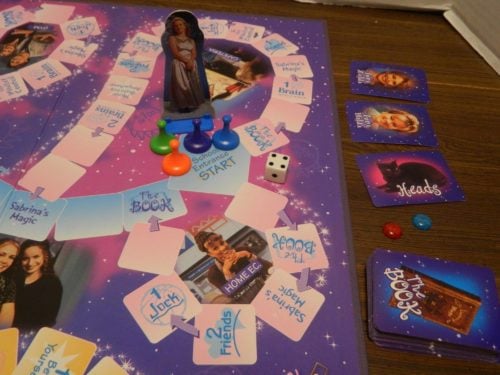 The current player has rolled a four. They can move their pawn to the right, down, or to the left.

After moving your pawn you will take the action corresponding to the space you landed on (see below). Play will then pass to the next player. 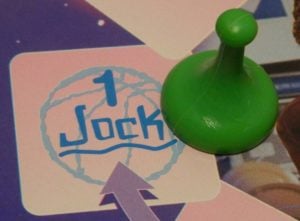 Brain, Friend, and Jock Spaces – When you land on one of these spaces you will collect one or two points (depending on the number on the space) of the corresponding type of points. You will add the points you scored to the corresponding column of your scorecard. If Sabrina is in the location corresponding to the track that you are currently on, you will score twice as many points 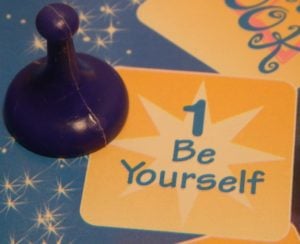 Be Yourself – Players who land on a Be Yourself space choose one of the columns on their scoresheet to add a point to. 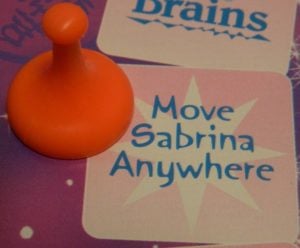 Move Sabrina Anywhere – When you land on this space you can move Sabrina to the Gym, Home Ec., Biology, Cafeteria, or Sabrina’s House. 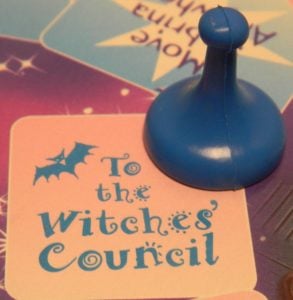 To The Witches’ Council/Closet Spaces – Players who land on these spaces will immediately move their pawn to the Wiches’ Council picture. On their next turn they will roll the die. 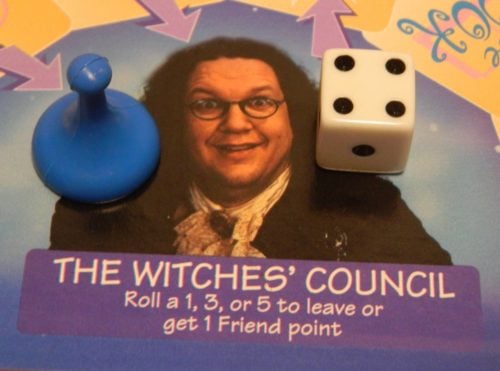 While at the Witches’ Council this player rolled a four. They will earn one friend point this turn but will stay on the space. On their next turn they will get to roll the die again. 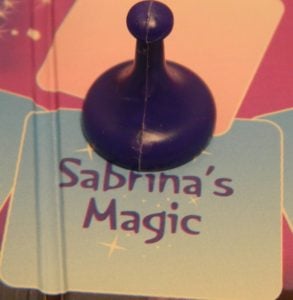 Sabrina’s Magic – When a player lands on this space they will get to perform a “magic trick”. First the player will choose one of the other players to be their partner. The player will then choose which trick they will try to perform.

In all three magic tricks if the current player guesses correctly, they will receive two points while their partner receives one point. These points can be added to any of the columns.

The Book – When a player lands on one of The Book spaces, they will draw the top card from The Book deck. They will read the card and do what it says. Most cards are self explanatory. If a card forces you to lose points that you don’t have, you won’t go into negative points. Once a card is used it is discarded. There are a couple special cards that need further explanation though:

The first player to reach or exceed the amount of points they need in all four columns, wins the game. This happens immediately even if it occurs during another player’s turn. 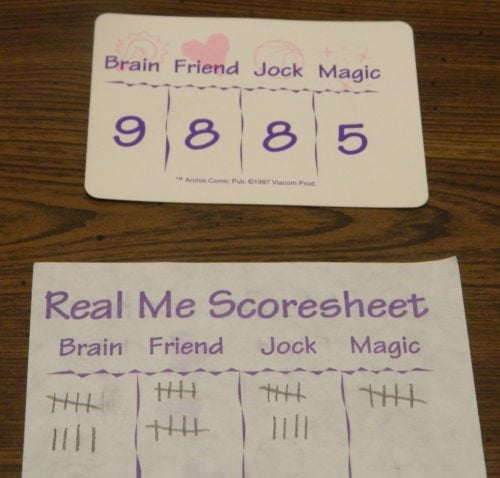 This player needed to earn 9 brain, 8 friend, 8 jock, and 5 magic during the game. Since they have accumulated the associated number of points, they will win the game.

My Thoughts on Sabrina The Teenage Witch Game

When I first saw The Sabrina The Teenage Witch board game I honestly didn’t expect much. I have played enough 1980s and 1990s board games based on popular franchises to know that they rarely did anything original. Most were made as quick cash grabs in order to make money off of fans of the franchise. I assumed that the Sabrina The Teenage Witch game would be another game in this long list of bad franchise board games.

I mostly thought this because like most of these bad franchise games, the Sabrina The Teenage Witch Game was a roll and move game. Most older franchise games just took a popular franchise, pasted it onto a generic roll and move game, and possibly added a couple tiny mechanics to try and utilize the theme. At its core this is exactly what the Sabrina The Teenage Witch Game is. You roll the die and move your playing piece around the gameboard taking actions based on what space you landed on. Unlike most of these roll and move games though, you aren’t just racing in order to reach the end of the track.

Instead the goal of the Sabrina The Teenage Witch Game is to acquire a given amount of points. At the beginning of the game you are given a card that tells you how many points you need to acquire for each category. You then move around the board trying to acquire the points that you need. This actually kind of reminds me of the gameplay in Careers. Once you are on a path you must follow it, but the game gives you some options about where you want to move on the gameboard. Each section of the gameboard seems to emphasize different types of points. If there is a type of points that you really need, you can focus your time on that part of the gameboard.

In theory I like this idea as it adds a little strategy to the roll and move genre that rarely contains any strategy. Instead of just rolling the die and moving along the track, you have the ability to make some decisions about where you want to move. This allows you to somewhat impact your fate in the game. The game is still far from strategic, but it is better than your typical roll and move game.

While I like the idea of having to collect different types of points, it does introduce some of its own issues. In a game like Careers you get to choose which areas you want to emphasize allowing you to focus on certain areas. In Sabrina The Teenage Witch Game you are just given a card and are forced to try and get those points. Some cards tend to emphasize one or two types of points and others spread out the points between the four categories. This ends up adding some luck to the game as it is probably better to have the points spread out as you can then benefit off of every space you land on instead of having to just focus on one type of point.

Overall I found the points mechanic to be flawed but it is genuinely a good addition to the game. I cannot say the same for the other additions to the Sabrina The Teenage Witch Game.

Let’s begin with the “magic” tricks. I put quotation marks around magic because no one could actually think they are real magic tricks. While the game has three different tricks, they are basically all the same. You pretty much make a random guess that has a 50/50 chance of being right and then see if you are right. If you are right you get two points while your chosen partner gets one point.

These magic tricks were probably meant to only be silly distractions but they don’t really bring anything to the game. First good luck finding a good way of flipping the Salem the Cat card where it will actually flip in the air. Second I have no idea why your partner gets a point for basically doing nothing. Finally while it was probably just my group being horribly unlucky, it seems hard to actually successfully complete one of the magic tricks. Statistically you should have a 50% chance of being correct in all of the tricks. We ended up being successful considerably less than that.

While the magic tricks are mostly just a silly waste of time, by far the worst mechanic in the game comes from one of The Book cards. Basically one of the cards forces you to swap all of your progress with another player. This is a really dumb mechanic as it makes the rest of the game worthless. For example you could be one point away from winning the game. A player can then draw this card and you lose all of your progress to the player on your left. What is the point of even playing the game when you can lose all your progress due to the draw of one card.

All this mechanic adds to the game is complete randomness where a player who played poorly for most of the game could end up winning because they were lucky once. Unless one of the players win quickly, at least one of the cards are likely to come out as there are three of the cards in the deck. While the Sabrina The Teenage Witch Game doesn’t have much strategy, this mechanic makes it pretty easy for a player to only win because they were lucky.

As far as the components are concerned, they are pretty much what you would expect from a 1990s franchise game. The component quality is pretty typical with the cards being somewhat thin. The gameboard and pawns are pretty basic as well. While this is kind of irrelevant, the gemstones kind of look like a M&M that was broken in half. The game does a decent job utilizing images from the show, but otherwise there isn’t much else to the components.

Should You Buy Sabrina The Teenage Witch Game?

I can’t say that I had high expectations for the Sabrina The Teenage Witch Game. I thought it was going to be a hastily made game to cash in on the popularity of the show. In theory the game is probably better than a lot of franchise games from the 1980s and 1990s but not by a lot. The game is mostly a pretty typical roll and move game. The addition of players having to collect different types of points from the board adds some strategy to the game as you can emphasize different parts of the board. The other new additions don’t add much to the game though. The magic tricks are far from magical as they just feel like a silly waste of time. The cards that force you to trade scoresheets with other players is even worse as they can make most of the game feel worthless.

My recommendation for the Sabrina The Teenage Witch Game is pretty simple. While it is better than quite a few franchise games from that era, if you aren’t a big fan of the television show there is no reason to pick up the Sabrina The Teenage Witch Game. If you are a big fan of the show, there is enough to the game that it might be worth picking up if you can get a good deal on it.

If you would like to purchase Sabrina The Teenage Witch Game you can find it online: Amazon