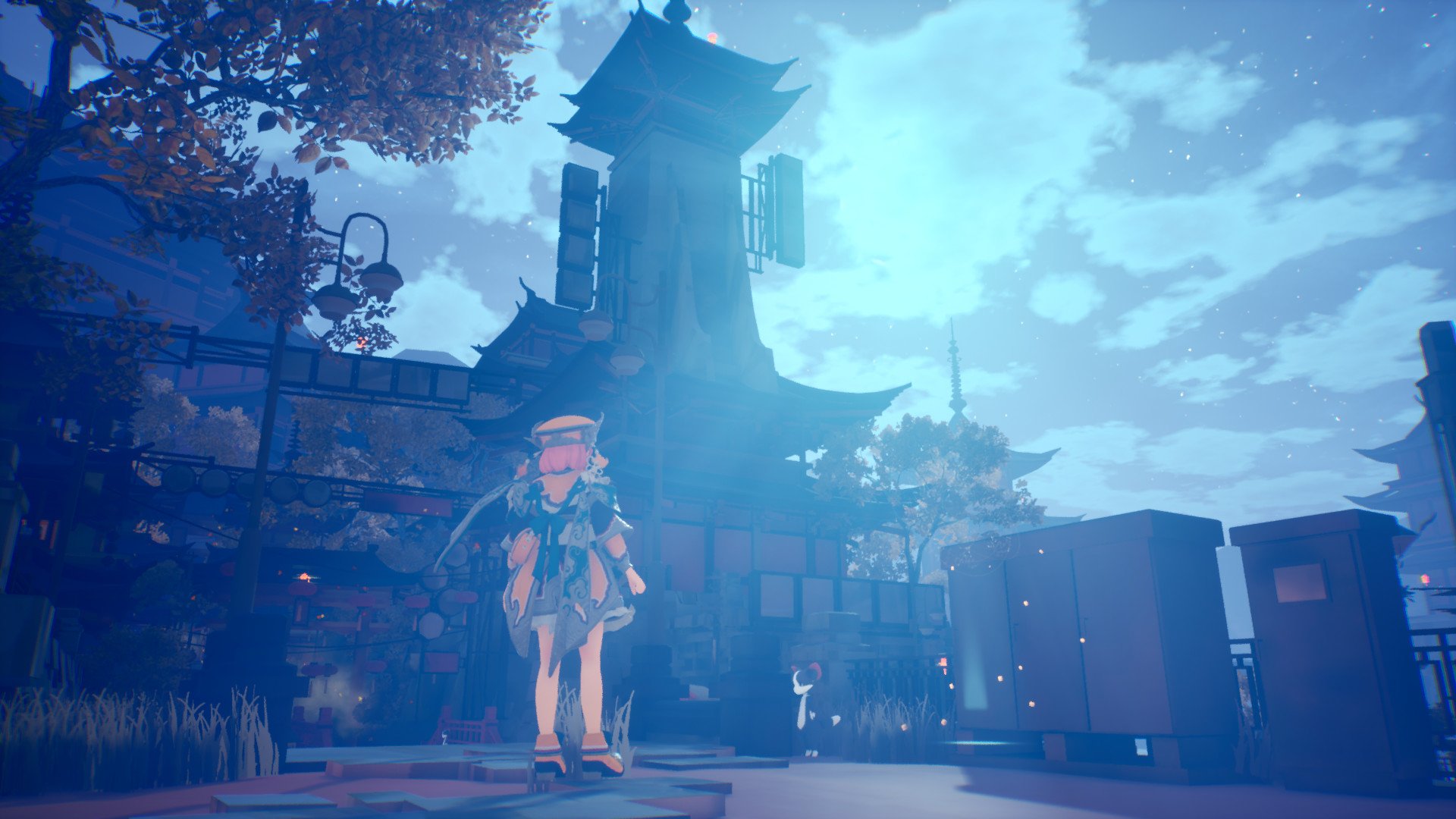 Ever since I was a kid I have been a big fan of the 3D platforming genre. As there aren’t many platformers made by AAA studios anymore, I generally like to check out new indie games that are released from the genre. When I first saw TASOMACHI: Behind the Twilight I honestly didn’t know what to think as the overall look and theme of the game looked quite different than your typical game from the genre. I was intrigued though as the game looked interesting. TASOMACHI: Behind the Twilight is basically a collect-a-thon, but the gameplay is quite fun where fans of the 3D platforming genre should really enjoy it.

In TASOMACHI: Behind the Twilight you play as Yukumo. She is traveling the world in her airship when she suddenly crashes. She has just enough power to land in a nearby town. As she searches the town for parts to fix her ship, she discovers the town mostly abandoned outside a strange cat-like species of inhabitants. The area has been covered by a dangerous fog which has scared off most of the inhabitants. In order to save the region and fix your ship you must search for energy sources (Sources of Earth). Can you fix your ship and return the area to its former glory?

For all intents and purposes TASOMACHI: Behind the Twilight is a 3D platformer. There are no enemies in the game and you can’t really die. If you fall down a pit you are just reset to the last checkpoint. To begin the game you are only given a basic single jump. As you advance in the game though you will acquire abilities to slam down on the ground, dash through the air, and even an ability to jump higher into the air. You need to use these abilities along with the various trampolines and other gadgets you encounter in order to move around the world.

I would say that there are two main elements to the game. First each of the towns/locations feature two sanctuaries. Each sanctuary consists of four different challenges that you have to complete in order to lift the fog in your current area. A few of these are memory/trial and error challenges, but most are platforming challenges. You need to move between the platforms in order to reach the other end of the room. This gives you a Source of Earth (the game’s collectible) and allows you to light a torch. Once you light all four torches you clear the sanctuary giving you additional access to the current location or unlocking the next location.

The other element of TASOMACHI: Behind the Twilight is what I will refer to as the collectibles mechanic. In each town you visit there will be Sources of Earth spread around. Some are hidden, some require you to complete platforming challenges to reach them, and some are provided for helping the villagers with tasks. In addition to completing the sanctuaries, to progress in the game you will have to acquire a certain number of these Sources of Earth to unlock the next location.

This comparison is not perfect, but while playing TASOMACHI: Behind the Twilight it actually reminded me a lot of the Mario franchise. While it is not as deep and doesn’t feature as much variety, the gameplay actually reminded me a lot of the franchise. Most of the gameplay revolves around collecting the Sources of Earth. Basically think of the star/moon/etc collecting from most 3D Mario games. I will be blunt. If this doesn’t sound all that interesting to you, TASOMACHI: Behind the Twilight likely won’t be for you.

While the game is not perfect, I generally really enjoyed playing it. There is just something really satisfying about finding and picking up a bunch of collectibles. The game has a bunch of them as well. I don’t know exactly how many Sources of Earth there are in the game, but there are at least 190 of them. A lot of them can be acquired from platforming challenges, but there are also some mini challenges that you have to complete from villagers. I wish there was a little more variety in the ways that you acquire them, but this element of the game is quite fun.

This is supported by controls that work really well most of the time. The platforming is a little “floaty” where you have a lot of control over your character in the air. You usually can jump far enough where you don’t need to perfectly time jumps in order to make them. This does make the game easier, but I still found the platforming to be quite satisfying. As you progress through the game you acquire new abilities which allow you to access new areas. Basically the controls work well to create a satisfying platforming experience.

I will say though that you shouldn’t expect a particularly difficult game. I play a lot of platformers so that may have played a part, but I was never really challenged while playing the game. When I did fall down a pit, the resets never really hurt all that much. To acquire all of the Sources of Earth needed to reach the credits shouldn’t be all that difficult. It may be somewhat difficult to acquire all of the Sources of Earth, or it will at least require some perseverance to thoroughly search every location. The simpler difficulty means that TASOMACHI: Behind the Twilight is a game that you can just relax while playing instead of stressing out because of your deaths. Those that want a real challenge though will likely be disappointed.

As for the game’s length it really depends on what you want to accomplish. In order to reach the credits you will have to acquire 150 Sources of Earth and complete three main hub locations. This took me around 5-6 hours. It could take a little less time if you focus mostly on the easy to acquire collectibles, or it could take a little longer if you struggle with acquiring enough to progress. If you want to 100% the game though, I think it will take quite a bit more time. I am not sure how many total Sources of Earth there are, but there were still quite a few left remaining when I finished the game. I would guess acquiring them all would add at least a couple more hours to the game’s length.

I generally enjoyed TASOMACHI: Behind the Twilight, but the game has a couple of issues I want to quickly talk about.

First the game is not going to be for everyone. As I mentioned earlier, the game is basically a collect-a-thon. The entire game is built around collecting the Sources of Earth. If this doesn’t appeal to you, the game won’t be for you. While this is usually pretty fun, it does make the game feel a little repetitive at times. Each new ability you unlock gives you more options, but the gameplay never really changes all that much from the beginning to the end.

The other issue has to deal with the game’s overall theme and atmosphere. I actually really liked the game’s atmosphere. For an indie game, the game looks a lot better than I was expecting. There are parts of the game that look stunning. The problem is that the game doesn’t really have much of a story. The basic story involves your ship crashing and you trying to repair it. In the meantime you need to help lift the fog from the villages you visit. On the surface this is basically all the game has to offer for the story. Most of the story actually comes from various notes/letters you find scattered around town. There might be a story beneath the surface, but I just never really cared all that much to try and seek it out.

In a lot of ways TASOMACHI: Behind the Twilight feels like what you would get if you took the star/moon/etc collecting aspect from the Mario franchise and built an entire game around it. The 3D platforming is quite satisfying and fun as the controls are responsive. It is also just fun trying to collect as many things as possible. The game’s visuals can be stunning at times as well. I will say that the gameplay is not particularly difficult and it can get repetitive at times. I didn’t find the story to be all that interesting either. All said I enjoyed my time with the game.

Does the idea of collecting a bunch of different things through various platforming challenges sound interesting to you? If you never really cared for the star collecting from the Mario series, I don’t see TASOMACHI: Behind the Twilight being for you. Those that like finding and picking up every collectible though will likely really enjoy TASOMACHI: Behind the Twilight and should consider picking it up.