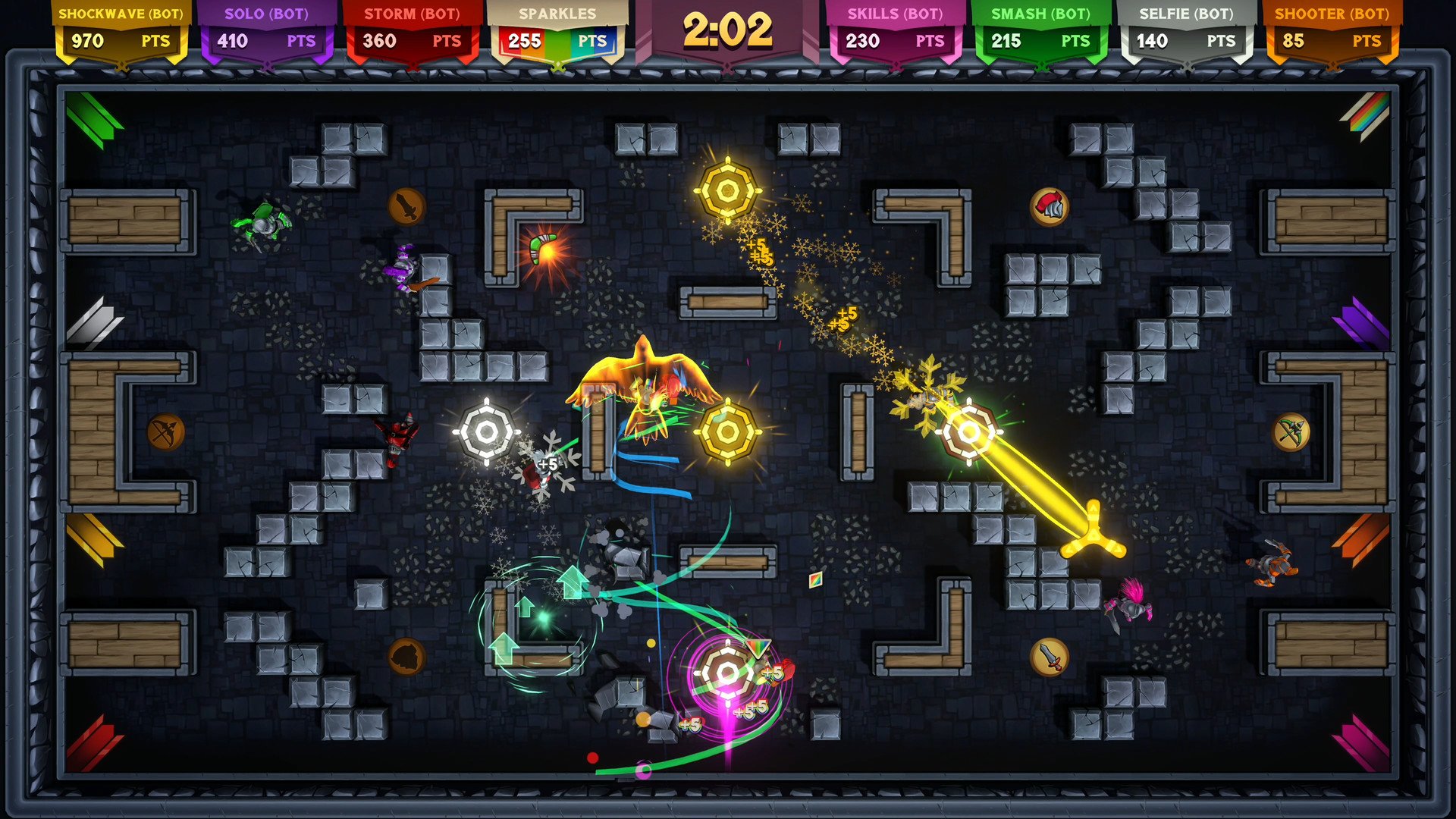 The gameplay of Knight Squad 2 is really simple. You move around the stage killing the other knights while usually having to complete other objectives as well. In addition to moving around with the analog stick, there is also a button to use your current equipped weapon and a button that allows you to use your shield. Players can play by themselves or in teams in order to complete the objectives.

While the core gameplay revolves around using your weapon to kill the other knights, Knight Squad 2 consists of a number of different “mini games” that you will compete in. The games include the following:

If this wasn’t enough options, the game also gives you quite a few different ways of modifying each of these modes. Each of the modes has three to five stages, with the modes that support both free for all and teams having even more stages. Players can choose to play a single match, or play a tournament of several matches to declare a winner. The game also allows you to add a number of different modifiers to the game. You can choose what weapon players start with, which weapons can and can’t spawn, and even the frequency that items will spawn. You can craft whatever you want, or you can let the game randomize all of these options creating some games that can be totally chaotic. While some of these combinations can break some of the game modes, others make the game modes feel completely different in a fun way.

While there are differences between the two games, in many ways Knight Squad 2 is very similar to the original game. It includes almost all of the same game modes except for three games. Jail Break was eliminated, but the new Minion Master is very similar. The games Arms Race and Serial Killer were also eliminated. To replace these games Race, Payload and Painter were added. Outside of some polish and other slight tweaks, the gameplay is mostly the same as well. For this reason if you played the original Knight Squad you should already have a pretty good idea of whether you will like the sequel as your feelings should be pretty similar.

Ultimately I enjoyed Knight Squad 2 just like the original game as it is the superior game in my opinion. I think the game’s greatest strength is just the fact that it is so easy to play. The basic controls consist of moving, attacking, and defending. That is it. Some of the other game modes add in a few other mechanics that you have to deal with, but you can easily pick up on what you are supposed to do within a minute or so. A new player could just pop in and almost immediately know what they are supposed to do. This is exactly what makes Knight Squad 2 a perfect party game. Anyone can play the game with ease, and each game is so short that you don’t have to worry about a big time commitment. Those who enjoy simple multiplayer arcade games will likely love Knight Squad 2.

While the basic gameplay is pretty straightforward, what I liked about Knight Squad 2 was the amount of variety that it still gives to players. The game includes thirteen different game modes after all. The basic gameplay is the same for all of them, but the additional objectives make each feel a little different. Some of these modes are pretty similar to other video game multiplayer modes, but others are pretty unique as well. I preferred some modes more than others, but I had fun with all of them. I genuinely appreciated the game’s variety as it keeps things fresh where the basic gameplay may otherwise have gotten a little repetitive after a while. Knight Squad 2 isn’t the type of game that I would play for hours at a time, but it works well as a game that you play for a half hour to an hour at a time.

Knight Squad 2 can be played either locally or online. I really can’t comment too much on the online mostly because I prefer local multiplayer and this review was based on me playing the game before it was released widely. Therefore I don’t know how the player base is going to develop over time. As for the game’s computer AI I would say that it is a little up and down. At the lowest levels, the AI doesn’t present much of a challenge. The lower levels are likely only to challenge younger children and those who rarely play video games. At the highest difficulty levels though they can present a decent challenge. They will occasionally do some stupid things that don’t make much sense, but they will do a good job killing you as well. In some of the modes the computer really likes to camp and do other things that feel kind of cheap which raises the difficulty significantly at times. Generally speaking the game will be the most enjoyable if you can play with as many humans as possible. If you need to fill in some spots with bots though, they will hold their own enough that you can still have fun. If you wanted to play the game by yourself, you could. I would probably recommend trying to find some other people to play with though.

I would say that the biggest issue with the game is that it is the type of game that is not going to be for everyone. The game is an arcade multiplayer game to its core. Thus if you have never really cared for this genre, I don’t see Knight Squad 2 being for you either. The combat is kind of basic, so if you are looking for a complex battle system you aren’t going to get it. Many of the game modes are not highly original either. Most of the modes are the same as the original game, and many are similar to those found in other games. These modes are still fun, but if you are looking for an original game with new modes never seen before, you may be a little disappointed.

Ultimately Knight Squad 2 is basically what I expected from a sequel to the original game. It doesn’t revolutionize the genre and sticks pretty close to the formula from the first game. It succeeds though because it gives players more of what was enjoyable about the first game. The gameplay is really simple where anyone can just jump in and know almost immediately what they are supposed to do. This makes Knight Squad 2 a great party/couch co-op game. The game also features quite a few different game modes that play different enough that they keep the game fresh. Some of the game modes in particular are really enjoyable. You are probably best playing the game with as many human players as possible, but the AI is good enough (outside of a few quirks) where you can still have fun if you have to rely on them filling in missing spots.