Each player chooses a side of the board and a set of pegs of the same color. Players randomly place the six black triangle board pieces into the game board making sure no one knows where the holes in the board are. Each player puts five of their pegs in their starting positions on the board. 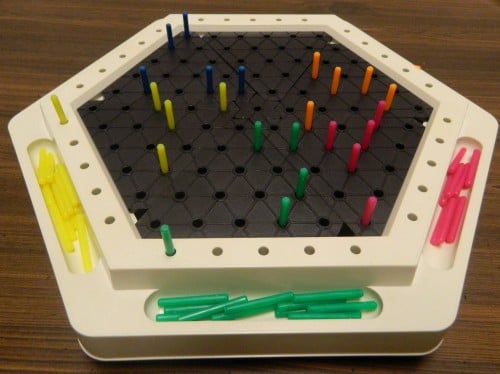 Down the Tubes plays a lot like Chinese Checkers. Players take turns moving one of their pegs. Players can either move their peg one space in any direction or they can jump pegs they are next to as long as there isn’t a peg on the other side. When jumping a player may be able to jump one peg and then another peg and so on until they run out of pegs or there are two pegs next to one another. When jumping multiple pegs players need to place the peg in every hole their peg moves through since if it fall through the hole the player’s turn ends immediately. 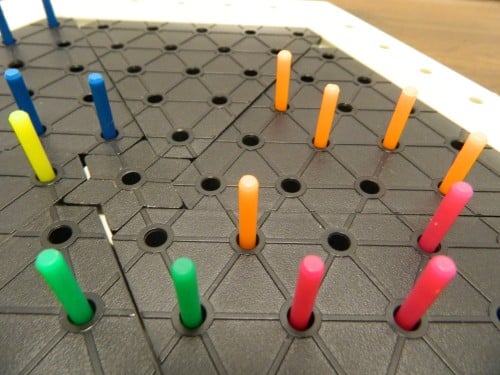 The major difference between Down the Tubes and Chinese Checkers is that the board has traps built into it. Most of the spaces on the board are safe. Some of the spaces have holes in them though which players’ pegs will fall through. When a player’s peg falls through a hole that peg is removed from the game and a new peg is placed in one of the player’s starting spots. The space the peg fell through is now safe since the peg that first fell through the space will stop future pegs from falling through the hole. If a player ever runs out of pegs and can’t place a new peg on the board when one of their pegs fall down a hole, they are eliminated from the game. The player can no longer make moves in the game but their pegs stay on the board so other players are able to jump them.

The first player to get five of their pegs to the opposite side of the game board wins. 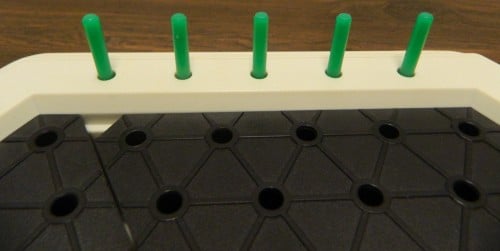 The green player has gotten five of their pegs to the other side of the game board and has won the game.

Before playing Down the Tubes I wasn’t expecting a lot from the game. It pretty much looked like Chinese Checkers mixed with a memory game where you had to remember the path you had already taken towards the other side of the board. I have never been a huge fan of Chinese Checkers and I can’t remember the last time I played the game. While far from great, Down the Tubes surprised me a little since it was a very solid game that had more to it than I was expecting.

Down the Tubes is exactly what the box claims: “Chinese Checkers With A Tantalizing Twist”. Although I haven’t played Chinese Checkers in a long time, I can tell that Down the Tubes plays just like it with the added addition of the traps hidden in the game board. I thought the game would just be a basic movement game where you tried to avoid the traps. While that is the main mechanic in the game, it is more challenging and thus more fun than that.

The biggest mechanic in Down The Tubes has to be the ability to remember where all of the traps are located on the board. You would think that would be pretty easy but it isn’t. Since each triangle has five traps in it, this means that there are thirty traps on the game board. Unless you have an amazing memory you won’t remember the exact path you take across the board so you will make mistakes and end up dropping your pegs down the traps. Your goal in the game should be to find the simplest path to the other side of the board. Once you have a path it saves you having to risk losing pieces as you move them across the board. You should mostly focus on the triangles in front of your starting location and the triangle across from you but that is still not enough because you likely won’t remember the exact path you took to the other side and other player’s pegs might get in your way forcing you to find a new path to the other side of the board. A good memory will definitely help but you also need to have good luck.

One of the best parts of the game is the fact that the game is interchangeable. Other than one issue which I will get to later, there is a lot to like about the interchangeable board. Unlike some interchangeable boards it is really easy to set up since you just need to drop the triangle pieces into place. What I really like about the randomized board is that you will likely never play the same game twice since with six pieces and many different ways to arrange the pieces the likelihood of playing the same game twice is unlikely. For a game like Down the Tubes this is crucial since the game wouldn’t be very fun if you knew where the traps were at the beginning of the game.

Outside of avoiding the traps, the key to Down the Tubes is to try and maximize the number of jumps you can perform on every turn. Unless a player gets really unlucky/lucky, the players are generally going to be at about the same place for most of the game. The only real way to get an advantage on the other players is to perform more jumps than them.

While you can make some moves that improve your chances of being able to jump other pegs, you don’t have a lot of control over that aspect of the game. While you can set up your own pieces for a chain of jumps, you have no impact on what the other players do. The other players could help you by setting up additional jumps or they could put their pieces in positions that prevent you from jumping other pieces. While there are some strategic options in the game, your fate in the game is likely going to come down to how lucky you are.

Another issue with the game comes from the fact that the game board is interchangeable. I love that the game board will change for every game but it could present some issues for some of the players. Based on the game I played it just felt that some players’ paths to the other side of the board were easier than others. While each triangle section has five traps, their positioning on the board could really mess with some players more than others. In most games it probably won’t matter much but some players could have much easier paths to the other side than other players.

Finally I want to bring up an issue that we encountered while playing the game that actually made the game better in my opinion. At one point in the game several of the triangles ended up falling into the tray which lead to the pegs that had fallen into the traps to come out which opened up those traps again. To prevent this from happening to you, you need to be careful when taking pegs out from the game board.  Thinking about it though I think this actually made the game better. Having the pegs block the traps takes quite a bit out of the game. While it hurts to lose one of your pegs to the traps, you no longer have to worry about that space for the rest of the game. Having to play with the traps always being a danger would actually make for a better game in my opinion because you would then have to always try and remember where the traps are located. I honestly wish there was a way that you could play the game where you would always be vulnerable to the traps.

If you want to purchase Down the Tubes, you can purchase it on Amazon here

Blu-ray and DVD Releases for June 9, 2015 (Highlights and Complete List)

Go For It! (1986) Board Game Review and Instructions
Click here to cancel reply.