) and Next Generation (Amazon

For people familiar with Fluxx you should already know the basics needed to play Star Trek Deep Space Nine Fluxx. If you are not familiar with unique Keepers mechanics, Creepers or Surprises you may want to check out those sections.

At the beginning of the game players will draw and play one card. There are no hand or keeper limits to start the game. To change these rules New Rule cards are played (see below). If New Rule cards or Keepers give players additional actions, the players can use these actions at any point during their turn. 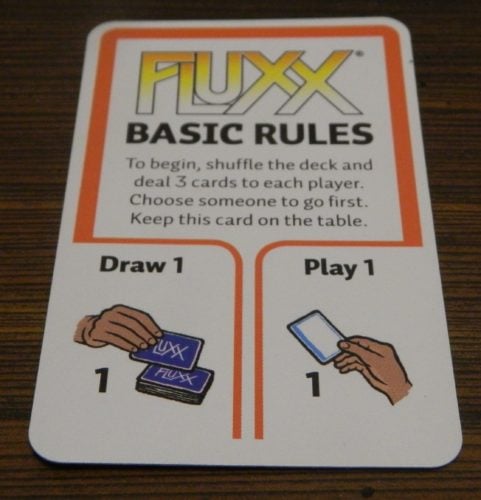 At the beginning of the game players will draw one card and play one card on their turn.

In Star Trek Deep Space Nine Fluxx there are different types of cards that have different effects on the game. 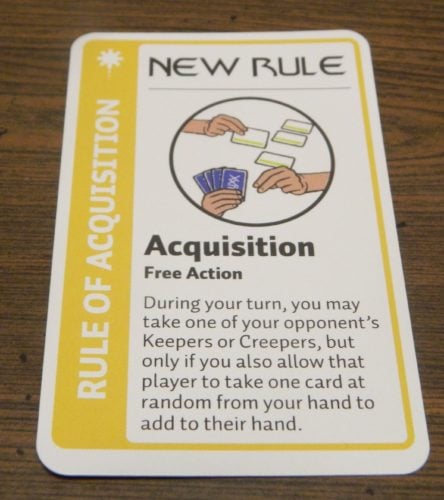 When this New Rule card is put into place players can take a Keeper or Creeper from another player in exchange for allowing them to take one card from their hand.

At the beginning of the game each player will draw one card and then play one card. Throughout the game players will play New Rule cards which will change up the rules that players will follow. New Rule cards can force players to draw or play more/less cards, put limits on the number of cards you can have in your hand or keepers you can have in front of you, and other rules that change how the game is played. Players must follow a New Rule card immediately after it is played with the current player having to possibly draw or play more cards. When a New Rule card contradicts a card already in play, the previous rule card is discarded.

Several New Rule cards have been put into play. Players will have to draw five cards and play two on their turn. Players may also only have three cards in their hand. Players are also able to acquire Keepers from other players with the Rules of Acquisition card. 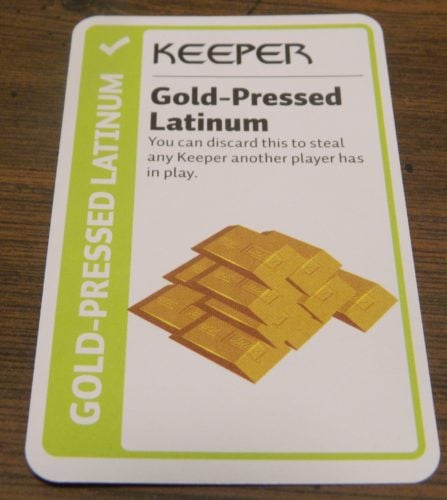 A player can play this card in front of them which can be used to complete goal cards. The Keeper has a special ability that allow you to discard it to take another Keeper card already in play.

Keeper cards are played in front of players. These cards are used to meet the goal cards which is needed to win the game. Players can have as many Keeper cards in front of them as they want as long as there is not a Keeper limit.

Keeper cards can have three special symbols on them which come into play for certain cards: 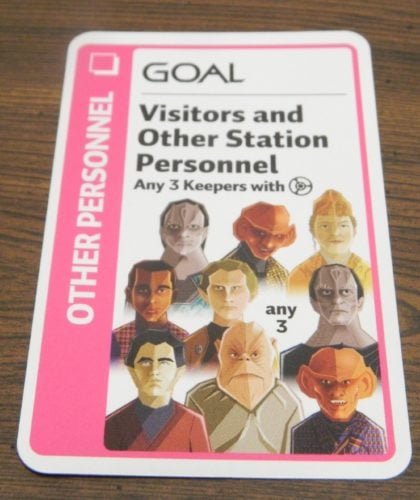 In order to complete this goal a player has to acquire three personnel or other visitor cards. 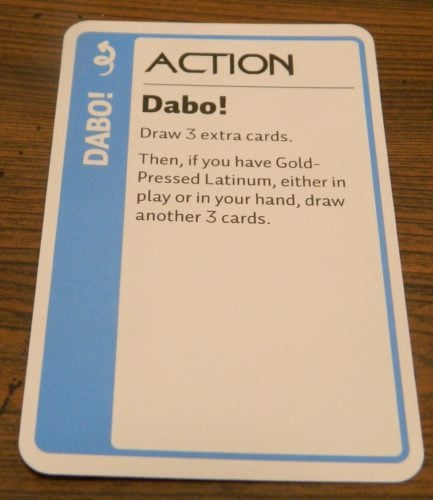 Action cards are played for their effect. After the card is read and the appropriate action is taken, the Action card is discarded. 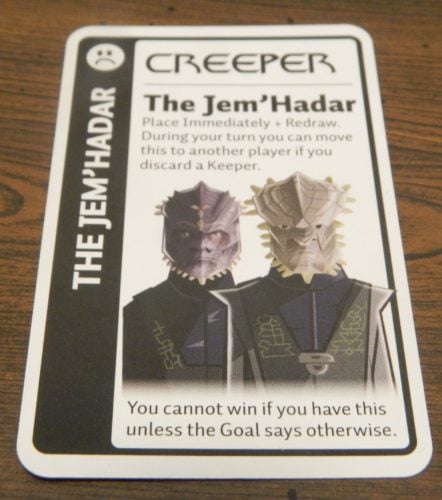 Creepers are similar to Keepers but usually keep you from winning the game. A player cannot win the game if they have a Creeper in front of them unless the Goal card specifically needs the Creeper(s) in order to meet the goal.

Whenever a player draws a Creeper card they must play it out in front of themselves. This does not count as a card being played. The player will then draw a new card to replace the Creeper that was drawn. 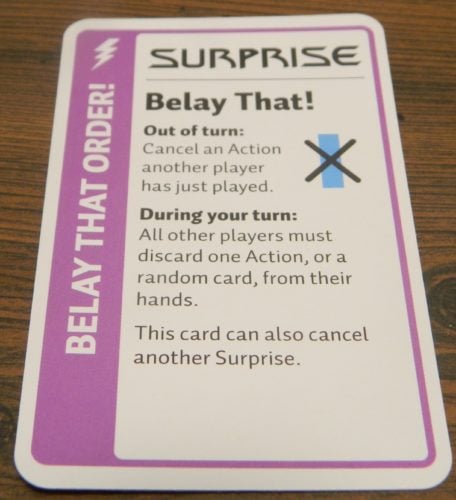 The game will continue until one of the players has all of the keepers from the current goal card in front of them. The game ends immediately when this happens. The player who meets the goal card will win the game even if it is not their turn. 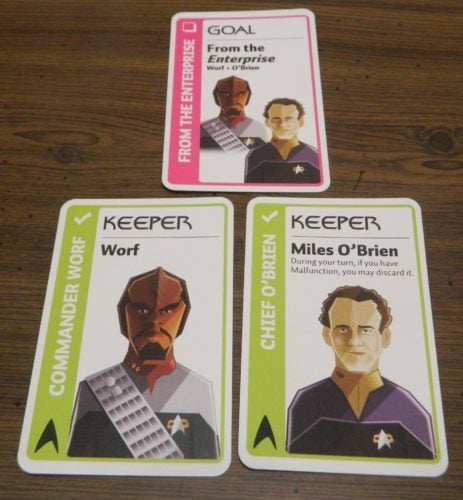 This player has Worf and Miles O’ Brien in front of them. As the current goal requires these two cards, this player will win the game.

As I have already reviewed quite a few different Fluxx games on this site in the past, I am not going to go into great depth on the basic gameplay of Fluxx as it is covered in some of my other reviews. Basically Fluxx is a game where the rules are constantly changing. How many cards you draw and play, how many cards you can have in your hand and in front of you, what the ultimate goal is, and other rules can change due to just one card being played. Now this might sound chaotic and it is. This is one of the reasons why I enjoy Fluxx though. You never know what is going to happen in the game so your strategy has to constantly change. The game is also quite easy to play as you can explain the game to new players within a couple minutes. If you want a game that you can just play without having to put a lot of thought into what you are doing, Fluxx is the game for you.

While the chaos is one of the best things about Fluxx it does lead to the game’s biggest issue as well. While Fluxx does have some strategy with regards to how you play your cards, the game also relies on a lot of luck. You don’t have a lot of control over your fate in the game. What cards you are dealt and what cards the other players play will have a big influence on how well you do in the game. You basically need some luck on your side if you want any chance of winning the game. Players can suddenly win the game due to nothing they even did. You could also easily lose the game due to no fault of your own. Most of the people that don’t like the Fluxx series is due to this reliance on luck. I think this is a little overblown, but I can see the high reliance on luck turning off some players.

I would say the area where Star Trek Deep Space Nine Fluxx differs the most from other Fluxx games is the ability to mess with the other players. Fluxx has always allowed players to mess with each other a lot but I think this version takes it even further. This is neither a good or bad thing. It is just a different experience. The game includes quite a few cards that prevent players from playing certain cards. I was also kind of surprised by how many cards allow you to steal Keepers played by other players.

A lot of these mechanics come from the Keeper cards themselves. Previous Fluxx games have had Keepers with special abilities. I don’t remember playimg another Fluxx game with as many Keepers with special abilities as Star Trek Deep Space Nine Fluxx though. Almost half of the Keepers (10 out of 24) have some sort of special ability. A lot of these Keeper abilities allow you to steal or exchange a Keeper with another player. This leads to Keepers changing owners quite a bit more than your typical Fluxx game. This is especially true when several of these cards are put into play at the same time. This adds some strategy to the game as it gives you more options to acquire the cards you need to meet a goal card. This does add a decent amount of luck to the game though as drawing the right cards can give you abilities that can really help you.

While I don’t want to really get into card specifics, there are some really interesting new cards in the game. I want to talk about two cards in particular that I found to be really interesting. First there is the New Rule card Rules of Acquisition. Rules of Acquisition allows players to take one Keeper or Creeper from another player each turn. In exchange the player you steal from gets to randomly take a card from your hand. This gives players a lot more flexibility when trying to acquire certain Keepers. The other interesting card is the Transporter. You could make a good case that the Transporter is the best card in the entire game. The Keeper allows you to take one Keeper from another player each turn. It becomes an even better card because there is an action card that returns all Keepers to players’ hands. If you have the Transporter though you get to take all of the Keepers that were on the table. The only reason why I don’t think the Transporter is too overpowered is because it will be an obvious target for all of the other players. Players will regularly use abilities and cards to try and steal the Transporter or make it malfunction. I don’t think anyone will keep control over the card for too long.

At this point fans of Deep Space Nine are probably wondering how well the game utilizes the theme. For the most part I think the game does a really good job utilizing the theme. While it has been a few years since I watched the show, the cards seem to do a good job capturing the series the best you could in a simple card game. The cards take mechanics from Fluxx and do a pretty good job combining them with things from the show. To top it off the game’s artwork is quite good as is expected from Fluxx games. The cards utilize the typical Fluxx style which works well with the theme.

Star Trek Deep Space Nine Fluxx is basically exactly what you would expect it to be. It takes the typical Fluxx formula and applies the Star Trek Deep Space Nine theme to it. The game maintains its easy to play gameplay that can be taught in minutes. The game can be chaotic which is usually good as it forces you to keep adjusting to the constantly changing gameplay. This does add quite a bit of luck to the game though as you don’t have a lot of control over your fate in the game. As far as the Star Trek Deep Space Nine version it seems to have a greater emphasis on allowing players to use abilities to mess with the other players. In particular a lot of the Keeper cards have special abilities on them which allow players to steal Keepers from other players. This gives players more options to obtain the cards they need while also adding some more luck to the game. Otherwise Star Trek Deep Space Nine Fluxx does a good job utilizing its theme.

If you would like to purchase Star Trek Deep Space Nine Fluxx you can find it online: Amazon