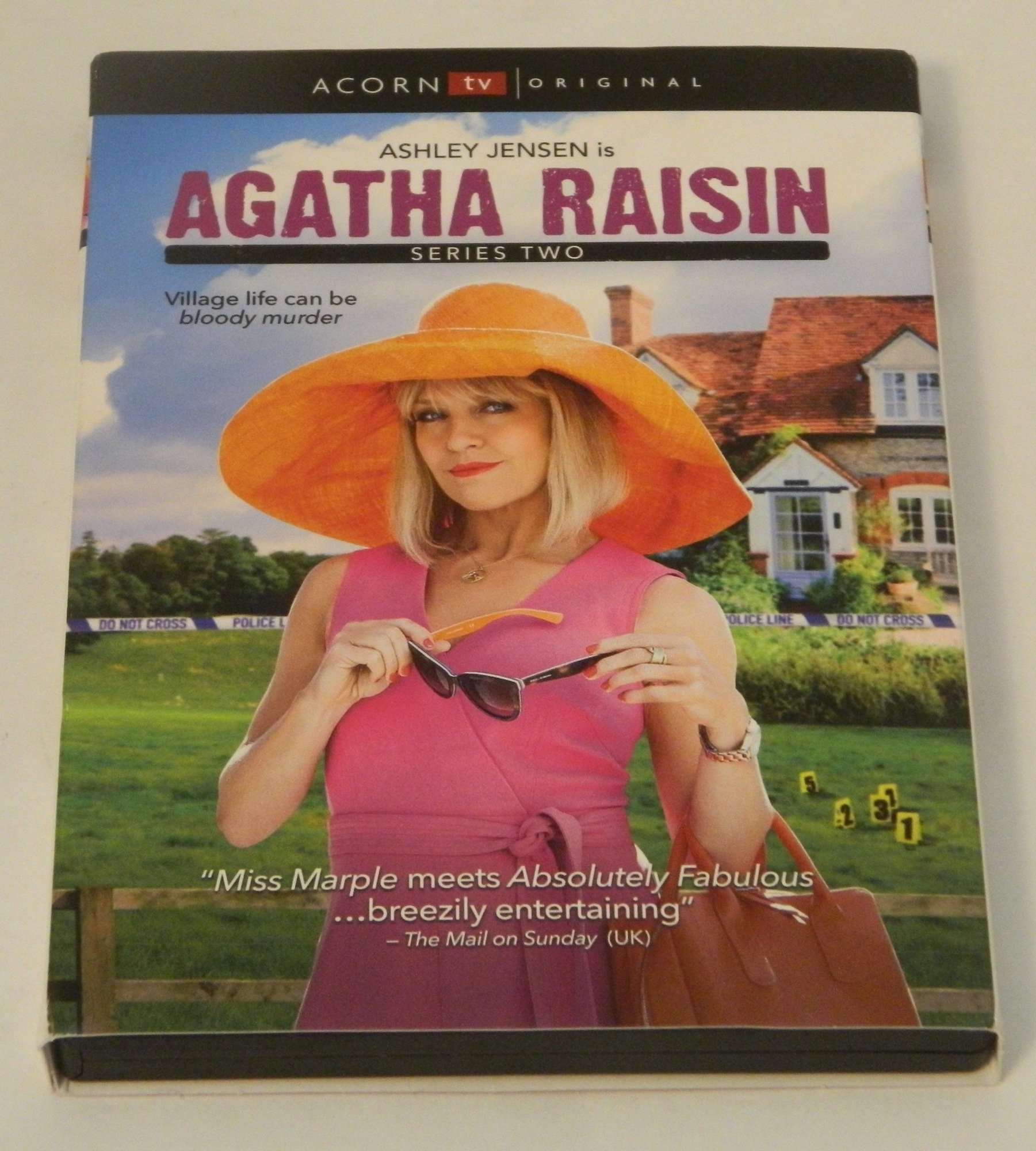 Before I was offered the chance to review Agatha Raisin: Series Two on DVD, I had never seen an episode of the show. I’m not the biggest fan of mystery series but I do tend to enjoy comedic takes on the genre. In fact, I’ve been looking for a comedic mystery show to watch for years now (since Monk and Psych went off the air). I thought that Agatha Raisin sounded like a fun concept that could maybe fill a bit of that hole. While it is far from as funny as those two classic USA Network series (not too many shows are as hilarious as them though), it is worth watching. I was also surprised by how much it reminded me of another niche of TV series I’ve been looking for a replacement for. While it does share some similarities with Monk and Psych, the show actually reminds me even more of those classic mid-00’s ABC dramedies like Desperate Housewives, Ugly Betty, and Grey’s Anatomy, only in the form of a British mystery series.

Agatha Raisin is a British comedic mystery series based on a series of novels and short stories from M.C. Beaton that originally started as a TV movie/pilot in 2014. In 2016, the series returned for an eight episode run on Sky1. Series two became an Acorn TV original with a three-episode order that rolled out last year. In addition to the change in network, the series also became a 90-minute series. The series stars Ugly Betty alumni Ashley Jensen as the titular character, an owner of a PR firm who decides to sell her business and retire early to the tiny village of Carsley. She expects to live a quiet and peaceful life in the village but after Carsley’s first murder in decades, she becomes a suspect. To clear her name, she sets out to solve the mystery and finds out that she has a knack for murder investigations. That’s a good thing as Carsley and its surrounding area suddenly sees its crime rate explode, with one or more murders for Agatha to solve in each episode. She also has some friends to help out along the way including her friend from London Roy (Mathew Horne), her cleaner and friend Gemma (Katy Wix), her potential love interest James Lacey (Jamie Glover), and detective Bill Wong (Matt McCooey).

I enjoyed the first season of Agatha Raisin quite a bit, especially the TV movie that started the series and the first actual episode. Those two episodes are by far the funniest of the show but while the comedy does fall off a bit from there, it does settle into a nice consistent groove (in fact, I haven’t given a single episode of the show lower than a three out of five). For series two, I was a bit worried about the move to feature-length episodes. While the TV movie was a similar length, the rest of the first series was all in the 45-minute range. In some ways, those episodes did feel a bit rushed (the mysteries suffered a little from the reduced length) but keeping the episode length down also meant the series was constantly moving and didn’t have time to get boring. I was worried that doubling the length of the episodes would mean a more dull show. This is somewhat the case in Agatha Raisin: Series Two but it’s not as significant as I thought it might be. The mysteries definitely improve with the increased length but the episodes do usually have at least a ten minutes of dullness and they did struggle to keep my attention at times.

Since there are only three (feature-length) episodes in Agatha Raisin: Series Two, for this review I will do something unusual and cover each episode individually. My thoughts on the three episodes are as follows:

S2.E1 “Agatha Raisin and the Wizard of Evesham”

After her attempt to re-win James in Cyprus fails, Agatha forms a single ladies’ club with Gemma and honorary member Roy. This doesn’t last long though as Agatha quickly draws the attention of a hairdresser, who also happens to be a blackmailer going after rich, older women. After a murder happens forty minutes into the episode, Agatha of course jumps into action to try to solve the case.

Overall, I would consider the season two premiere to be a very average, almost by-the-numbers type of episode. While the murder happens a lot later in the episode than usual, there really isn’t much here that isn’t offered in other episodes. This case likely could have been a standard 45-minute episode without missing too much. As usual, DCI Wilkes steals the show. Over the break, he supposedly got some more training but is still the lovably inept detective I’ve loved from the beginning of the series. Other than Wilkes’ hilarity though, there’s just nothing that stands out. This is perfectly average episode. 3/5

Agatha decides to take a rural retreat to Fryfam (the supposed home of the fairies) to start writing her first murder mystery novel “The Posh Guy Had It Coming.” Suffering from writer’s block, she heads to the local pub and after she announces that she’s an amateur detective, a woman asks her to investigate whether or not her husband is having an affair with the bartender. Of course, her husband quickly ends up dead and after Agatha is framed for a robbery and murder (again), Charles (now a series regular), Bill, and Gemma must help her clear her name.

While they are necessary to keep the show’s premise even close to being realistic (otherwise nobody would be left alive in Carsley), I’ve always found the Agatha heads to a nearby location but still finds murders to solve episodes to be some of the weaker ones of the series. However, Agatha Raisin and the Fairies of Fryfam is one of the better ones in that category. It is also one of those “I predicted the killer as soon as I saw them” mysteries but there is some solid comedy in this episode. Among the highlights are Fryfam’s detective (who might give Wilkes a run for his money in terms of ineptitude) and almost everything Gemma does in the episode. 3/5

In the season finale, for once it’s not Agatha accused of a crime but sweet Sarah Bloxby. With Reverend Bloxby away on missionary work, a hot new priest arrives in Carsley to run the church in his stead. To the shock of nobody, he is killed early in the episode in Sarah’s residence. Sarah becomes a suspect of interest so Agatha attempts to solve the murder. She finds that the minister wasn’t as Godly as you would expect a Reverend to be.

Agatha Raisin and the Curious Curate is the highest-rated episode of the series on IMDB. I’m not sure I would go that far (I think the first two episodes of the series are still slightly better), but this is likely the third best episode of Agatha Raisin so far. While the mystery repeats the “sleeping with women for their money” storyline that’s been covered in probably at least five episodes of this series so far, it is the best mystery of the season and in my opinion the only episode of this season that 100% benefits from the added episode length. In addition to the good mystery, there’s also a funny side plot of DCI Wilkes attempting to run for a minor local election. When his opponent winds up dead, this leads to one of the funniest moments of the series with him offering himself up for questioning and admitting that his alibi is very weak. Agatha Raisin and the Curious Curate is the best mystery of the season and is definitely the highlight of the season. 3.5/5

While it may sound like I’m a bit down on series two of Agatha Raisin, I’m not. It doesn’t hit the highs of the early parts of series one but it is just as good as the latter episodes. I do wish they would have stuck with the shorter episode run times of the first series but the double-length episodes aren’t as dull as I feared they would be (and they do help the mysteries from feeling rushed). The first two episodes are just about ten to fifteen minutes too long (the last episode is the proper length), meaning you will need to watch some duller material but you are rewarded with more in-depth mysteries to make up for it. The move to becoming an Acorn TV original also has one other ramification. That is the loss of a lot of the supporting characters that helped make Carsley feel like a small town (the general store owner, Jez, and Mr. Boggle are all gone in series two). The (likely) lower budget the show had to operate with (or the addition of Charles to series regular status) also means that main characters like Roy, James, and Gemma all had to sit out an episode apiece. This isn’t a huge deal but it does mess with the chemistry of the show a bit.

The mystery series genre is one that usually doesn’t benefit a ton from great video quality, but Agatha Raisin does have more color than usual due to Agatha’s colorful clothing style and the gorgeous village the show is set in. Those two things make the video quality a bit more important than your average mystery series and luckily, Agatha Raisin: Series Two is one of the best looking Acorn Media DVD releases I’ve seen so far. The video quality is very sharp and the colors pop off the screen. Of course if the show was released on Blu-ray it would look even better, but the video quality isn’t too far off from that format in the first place. The bonus features are pretty much par for the course for Acorn Media releases, featuring a lengthy behind the scenes featurette (52 minutes) and a short “Agatha Asks” featurette (7 minutes). Both are worth watching but I certainly wouldn’t buy the DVD set just for them.

If you enjoyed the first season of Agatha Raisin, there is absolutely no reason why you shouldn’t pick up Series Two. The increased length of the episodes is both a blessing and a curse though. It does help flesh out the mysteries but it also leads to the first two episodes overstaying their welcome by ten to fifteen minutes. For those who like a bit of comedy in their mystery shows though, Agatha Raisin: Series Two is still a good choice. Recommended.