For those of you unfamiliar with Mental Floss, it is a media company that includes a website, YouTube channels, and a magazine that focus on strange/amusing facts and trivia. Between 2010 and 2012 Mental Floss decided to try and get into the board game arena by creating five different trivia based board games. Today I am looking Mixed Nuts a trivia game that has you determining fact from fiction in various stories from the past. While it might not revolutionize the trivia genre, Mixed Nuts is a solid little trivia game that will leave you with some interesting trivia knowledge.

How to Play Mixed Nuts

To begin the game each player takes a voting chip and a nut cup. Pour all of the nuts into the nut bowl in the game tray. The first player is chosen by determining which player is the “nuttiest”. 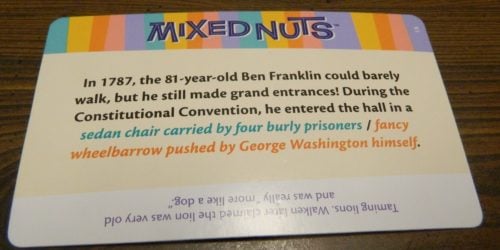 For this question the player has the option of using either “a sedan chair carried by four burly prisoners” or “a fancy wheelbarrow pushed by George Washington himself.”

Players who were not the reader receive one nut if they correctly guessed whether the option read to them was true or false. As the reader you also receive a nut if you chose correctly. The reader also gets a nut for every player who chose true even if it was actually false. 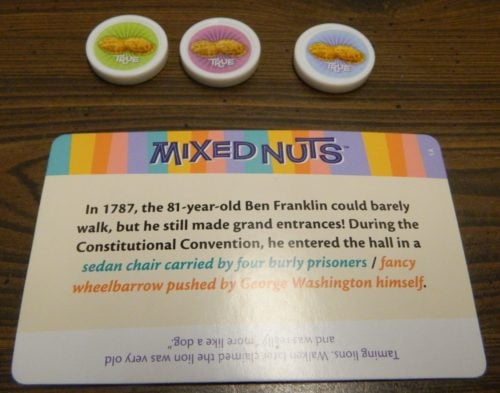 The current player had three players believe the story that the reader told. The reader would score three points for the three trues and could score another point if they correctly guessed true or false.

The game ends when everyone has been the reader for three turns. Everyone counts up their nuts and the player with the most nuts wins the game.

My Thoughts on Mixed Nuts

So it should not come as much of a surprise that Mixed Nuts is basically the prototypical trivia game. You just answer questions and whoever has the most points at the end of the game is the winner. If you hate trivia games, Mixed Nuts is not going to be for you. If you like trivia games though and like learning “worthless”/strange trivia, you will probably get a lot of enjoyment out of the stories in Mixed Nuts. While Mixed Nuts doesn’t revolutionize the trivia game genre, it is still a fun trivia game with a little twist.

As far as difficulty I would say that Mixed Nuts is kind of on the easy side. Since each question only has two choices, just by guessing you should get close to 50% of the questions correct. I really think Mixed Nuts should have included three or four different options since it would have made the game a little more difficult. While I admit to knowing a lot of worthless trivia, I found the questions to be quite easy and they still would have even if there were more than two options per card. I had actually heard of several of the stories from the cards that we played and I could form a very strong educated guess on a lot of the other cards. If I were able to see both options for all of the questions I think I could have answered 75-90% of them correctly.

The easy difficulty can be somewhat forgiven though because I don’t think Mixed Nuts was ever meant to be seen as a serious trivia game. I see it as more of a party trivia game that you pull out to have a little fun and maybe learn a few interesting facts. While the game technically only supports 8, if you are willing to find some more score tokens the game can support as many players as you want but you might have to reduce the number of times each player is the reader. A four player game lasts twelve questions which takes around 20-30 minutes. Each player you add will increase the game’s length since more questions will have to be asked.

While the game is easy, one thing that does add a little difficulty to the game is the fact that the reader is the only person that has all of the relevant information. The reader will know both options and since one has to be true they have an advantage over the other players. I really liked this mechanic. While it give the reader an advantage it also makes it harder for the other players since they don’t know what the other potential option was. What is even better is that if the reader reads the whole story without pausing, the other players might not even be able to tell which part of the story was the true/false section since a lot of the questions are written in a way where multiple parts of the story could easily be changed.

One thing I am a little concerned with about Mixed Nuts is that the game only has 150 cards which translates to 300 questions. That is a decent amount of questions and should last around 30 games if you play four player games. The problem is that I think the game will really suffer once you play through all of the cards. You obviously won’t remember the answers to all of the questions but you should have a good idea what the answers were to a lot of the questions which will kind of ruin the game. I just don’t see the point of playing the game after you have played through all of the cards which means you will get less than 30 games out of Mixed Nuts.

Overall the components are a little hit and miss. The biggest problem is with the voting chips. While the voting chips work, I think the game could have come up with a much better way of implementing the voting. The game should have either included a true and false chip for each player or just had a true and false side for the chips which you could have turned over to make your selection. I think this would have worked much better than trying to hide whether you have a chip in your hand. The nut cups are also kind of on the cheap side and the other components are made of cardboard. Despite being made out of cardboard, the nuts are still pretty nice though. The artwork is also pretty good.

Should You Buy Mixed Nuts?

Overall I had fun with Mixed Nuts. It doesn’t revolutionize the trivia genre but it really doesn’t have to. Mixed Nuts is just a very solid trivia game that includes some interesting facts/stories. The fact that the reader has more information than the other players is a nice twist. Mixed Nuts is far from an original game though and is a kind of easy.

Basically if you don’t like trivia games, Mixed Nuts is not going to be for you. If you like trivia games that aren’t too difficult and love learning strange new facts I think you could really enjoy Mixed Nuts. If you can get a good price on the game I think it is worth picking up Mixed Nuts.