Milton Bradley is not a company known for making original board games. While it has gotten better in recent years, a large portion of their game catalog is a bunch of bland games that didn’t really do anything particularly original. In the pursuit of their next big hit, Milton Bradley had a lot of board game failures especially in the 1970s-1990s. Most of these games are quite forgettable but there were a few games with some interesting ideas that were before their time. I was hoping that Spider Wars was going to be one of these games. Despite not being a fan of spiders, when I first saw Spider Wars it actually looked pretty interesting. Spider Wars has some really interesting ideas for a 1980s Milton Bradley game but the execution doesn’t live up to its potential.

How to Play Spider Wars 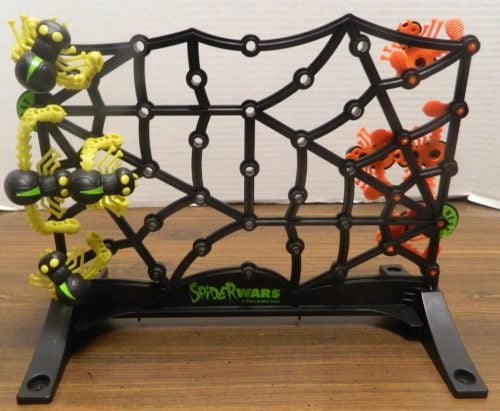 The spiders have been setup for the game. A note for the rest of the pictures. The original owner of the game placed the nest stickers in the wrong positions. There should be a green and orange sticker on each side of the board. The green nest sticker in the bottom right corner should have been an orange sticker.

When moving a spider a player chooses one of the spider’s legs and removes it from the board. They can then move it to any adjacent space that the foot can reach and inserts it back into the board. The normal spiders can move one space at a time while the Daddy Longlegs can either move one or two spaces. Once the spider is in its’ new location, this counts as one move. 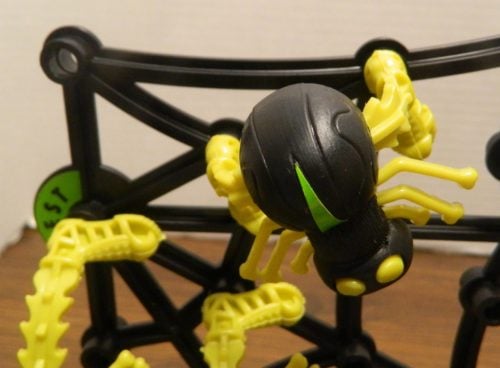 The green spider moved one of their feet from the top left corner one space to the right.

For the second move a player can either:

If a spider’s foot is moved onto a space already occupied by the other player, the player will press the foot into the space which will push out the other spider’s foot. The other spider will now only have one foot on the gameboard. This spider is referred to as a “dangler”. 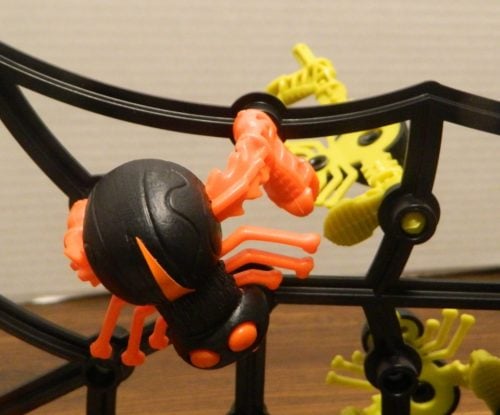 If both of a spider’s feet are removed from the board, it is eliminated from the game. 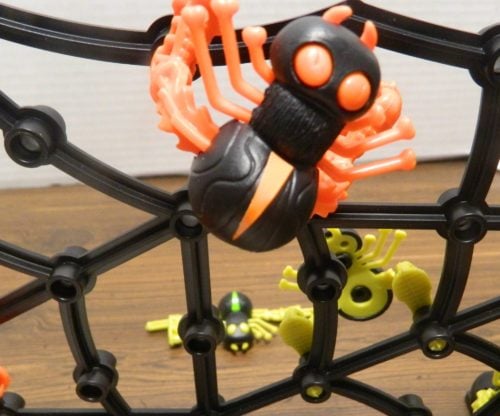 The orange player took out both of the green spider’s legs eliminating it from the game.

If one of your spiders is a dangler, you can use your turn (both moves) to put the spider’s dangling foot back on the board. When placing the foot back on the board there are rules about where it can be placed. The foot can only be placed in an unoccupied space. The foot can only be placed above, below or behind (towards your starting position) the spider’s other foot. 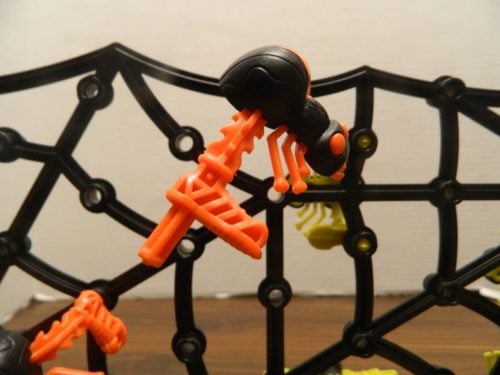 This orange spider is a dangler. They can use one of their turns to reattach the leg in the space below the other leg or one space back on the gameboard.

A player can win Spider Wars in one of two ways.

If a player eliminates all of the other player’s spiders from the board, they automatically win the game. 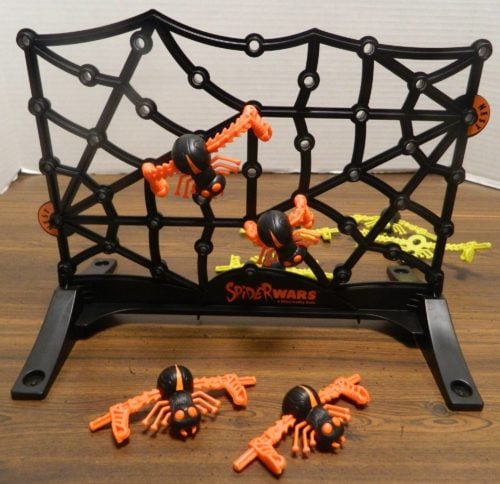 The orange player has eliminated all of the green player’s spiders so they have won the game.

If a player is able to move the foot of one of their spider’s onto the other player’s nest, they will win the game. 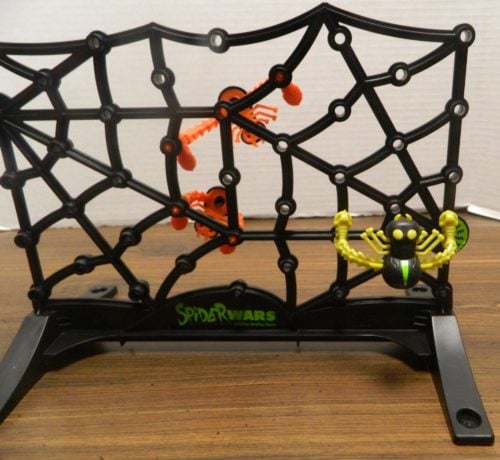 The green spider has reached the nest on the other side of the board. The green player has won the game.

My Thoughts on Spider Wars

Spider Wars is not what you would typically expect out of a 1980s Milton Bradley children’s game. Around this time most Milton Bradley children’s games were simple roll and move games or some sort of dexterity/action game. It was rare to see Milton Bradley make an abstract strategy game. At its core that is exactly what Spider Wars is. The game has more theming than most abstract strategy games but the mechanics are very similar. The game has zero reliance on luck as your success depends on outsmarting your opponent. Basically the gameplay revolves around moving your spider’s legs in order to protect your own nest, eliminate the other player’s spiders and hopefully reach the other side of the board.

When you first look at Spider Wars it is pretty obvious that the game was made in order to appeal to boys who liked “gross things” like spiders. What I was surprised by though is that it appears like some actual effort was put into designing the game. The game shares quite a bit in common with your typical abstract game but it has its own flavor as well. On the surface it kind of plays like Checkers or other abstract games where you try to capture the other player’s pieces. The main difference is that each piece is simultaneously on two different spaces. This affects how you can move a piece as the only thing restricting your movement is the location of the other foot. This movement mechanic of moving one foot at a time is really interesting and different than other abstract games.

The two legs impact more than just the movement. Having two legs allows a player an opportunity to save a spider that was attacked by the other player. As each attack only eliminates one of a spider’s legs, you have the opportunity save a spider. This adds an interesting strategic decision to the game. When a spider is dangling it is basically worthless as it can’t move or attack the other player. Getting back a spider can be really helpful. You have to sacrifice a whole turn to do it though. Do you sacrifice a turn to get one of your spiders back or do you use your turn to attack the other player or prepare for the other player’s next attack? This decision can be really important in determining who ultimately wins the game. This decision can add a lot more strategy to the game than I was expecting.

On top of all of this the components are actually quite good for a 1980s Milton Bradley game. The spiders in particular are quite a bit better than I was expecting. The feet are sometimes hard to get into the spaces but the legs are pretty clever. The legs are made of a rubbery plastic where you can bend them. This makes it pretty easy to bend and twist the spiders as you move them across the gameboard. The spiders even look quite a bit more detailed than you would expect. I think the game was also clever making the gameboard a spiderweb even though it creates some issues (more on this soon). The game obviously doesn’t have the best component quality but it is much better than what you can expect from your typical Milton Bradley game.

With all this going for Spider Wars, it is a shame that it doesn’t live up to its potential. I don’t know exactly what is wrong with the gameplay but it doesn’t work quite right.

I think the biggest problem with the game is that there seems to be issues with the gameplay from a strategic point of view. On the surface the game seems like it has a decent amount of strategy. Once you start playing the game though you start to question how much strategy the game actually has. I am guessing this is partially due to the game being designed for children, but the strategy doesn’t seem to impact the game as much as you would expect. It seems like the best strategy in the game is to just sit back in defense and wait for the other player to attack you. This can lead to a lot of stalemates as neither player wants to make an offensive move.

Another problem with the strategy is that I question how valuable it is to rescue your danglers. If you have no other moves available you might as well bring the spider back. In most situations though you are probably better off just letting it hang there. Giving up your whole turn to bring back a spider is a lot. You are usually better off using your two moves to attack the other player’s spiders. On the offensive side I think it is a better use of your turns to try and dangle spiders instead of getting rid of them completely. By dangling the spiders you force the other player to waste a turn if they want to do anything with the spider. If they choose to bring the spider back you can use your next turn to make them dangle again. If possible I think the best strategy is to dangle all of the spiders first and then go back and eliminate them on future turns.

On top of the strategy issues, I think the gameboard is way too small. You can theoretically win the game in two turns if you use the Daddy Longlegs as it only needs four movements in order to reach the other side of the board. With the board being so small, if you fall behind you are best off just trying to make a run for the other side of the board as you might be able to reach it before the other player can stop you. With such a small board I would expect most games to only last around five minutes unless one of the players suffers from analysis paralysis. This allows you to play several games in a short amount of time but it hurts the game in my opinion.

Should You Buy Spider Wars?

Spider Wars had some really interesting ideas for a 1980s Milton Bradley game. The premise behind the game actually had a lot of promise. While I am not a fan of spiders, the game actually does a really good job utilizing the theme in the game. The idea of each piece simultaneously being on two different spaces is an interesting idea as it dictates how you can move pieces as well as giving you a decision on whether to use a turn to save one of your spiders. The components are also quite good for a 1980s Milton Bradley game. Spider Wars had the potential to be a good children’s abstract game and yet it doesn’t live up to its potential. The problem is that while the game feels like it has strategy, in action the strategy aspect of the game has flaws. You are usually better off staying back and defending instead of attacking. You are also better off disabling the other player’s spiders than eliminating them entirely. Add this to the gameboard that is way too small and the strategy fails to live up to the game’s potential.

If the theme or abstract games in general don’t really appeal to you, Spider Wars is not going to be for you. If you have younger children who like spiders or you are looking for an easier abstract game, you might be able to get some enjoyment out of Spider Wars. Otherwise if you can find the game for cheap and don’t mind trying to fix some of the issues with some house rules, it might be worth giving Spider Wars a chance.

If you would like to purchase Spider Wars you can find it online: Amazon 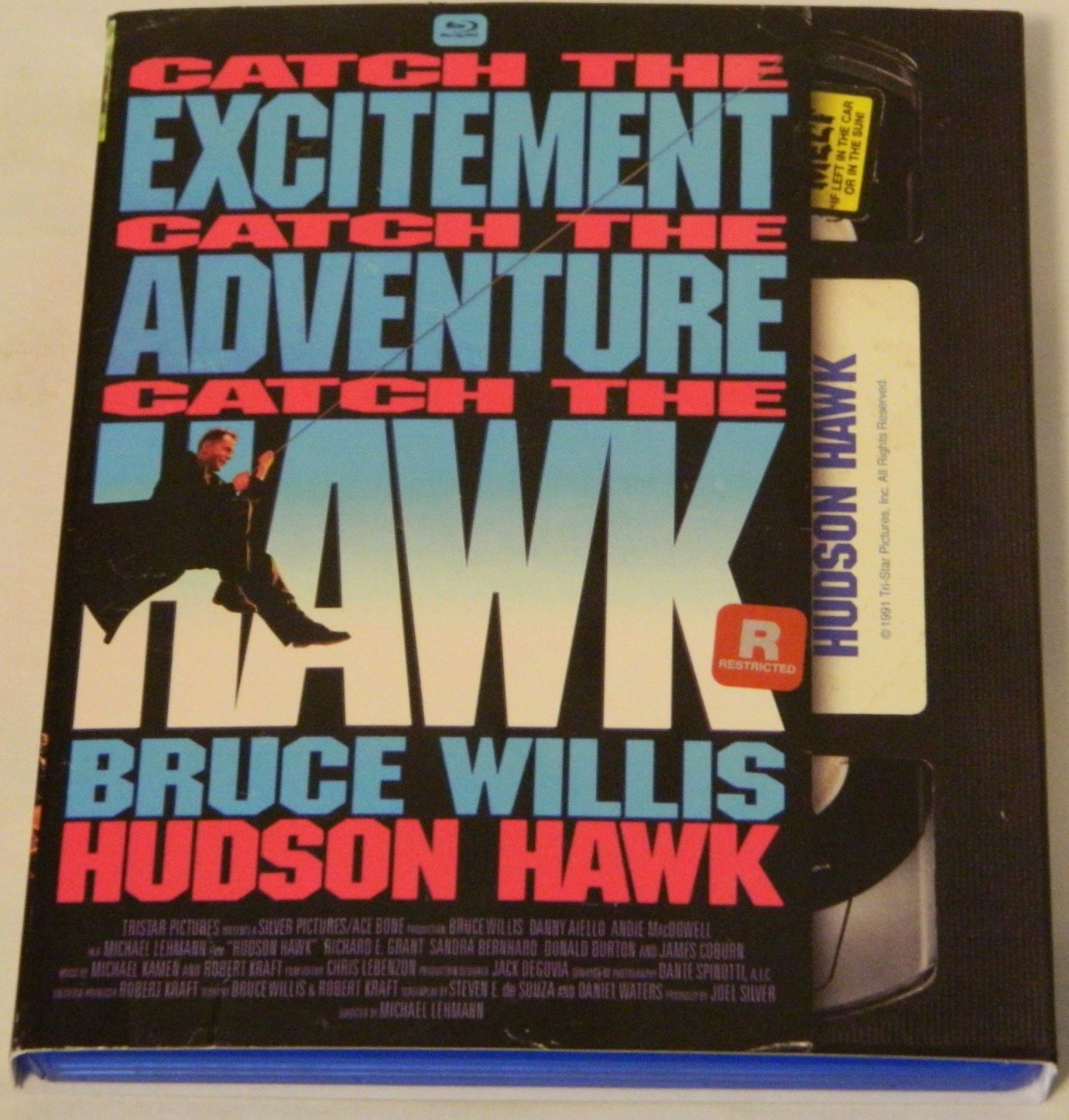 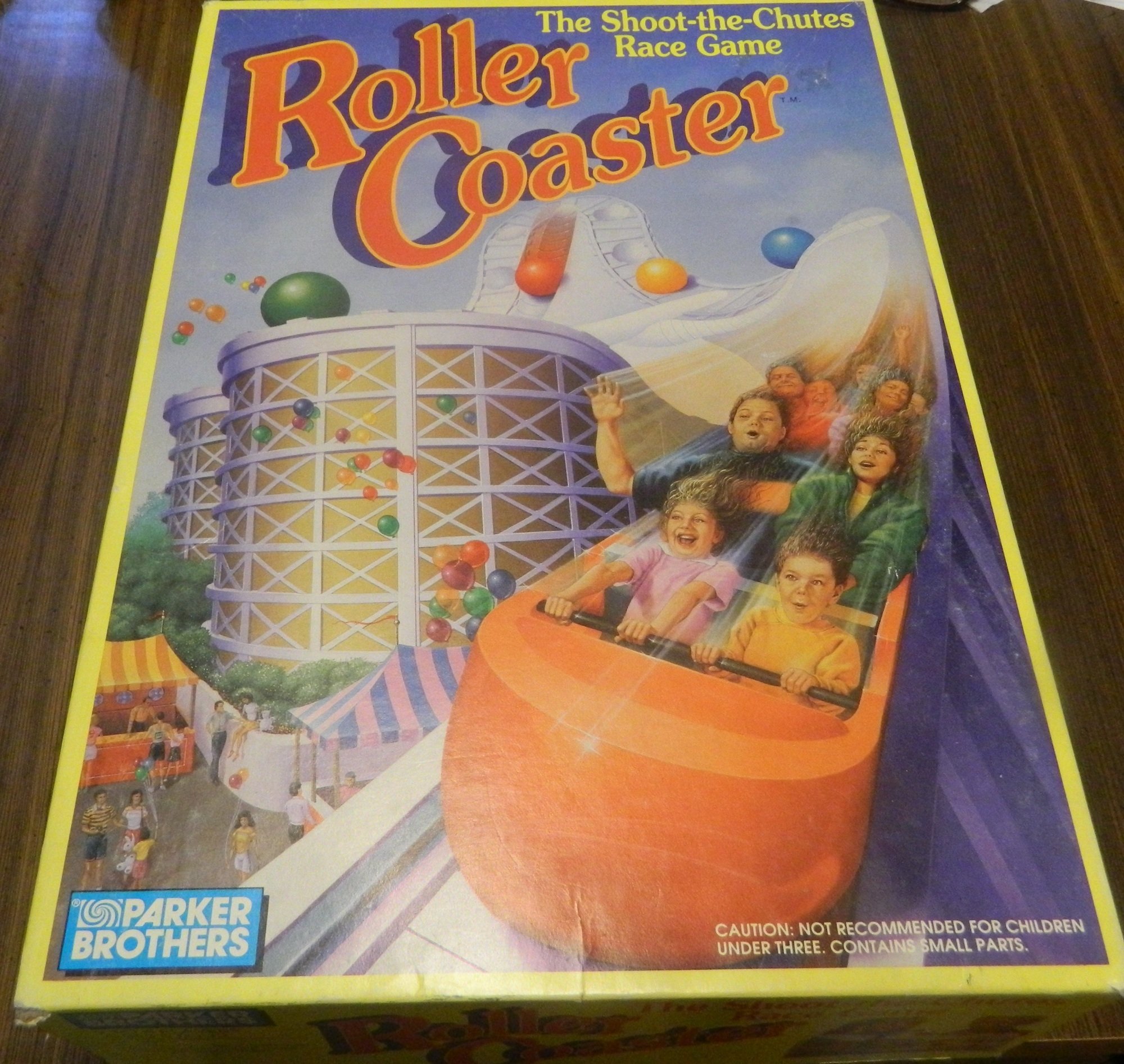