Released just last year, Speech Breaker is a game that was clearly a failure for Hasbro. Hasbro seems to have already started to clearance out the game around a year after it was released. I have also seen the game start to trickle into thrift shops which is kind of surprising for a game that is only around a year old. On top of all of this the game currently has terrible user ratings on Board Game Geek. So you might wonder why I decided to pick up the game? Well first I found the game for only $0.50 and it is hard to not give a game a chance at that price. The other reason that I wanted to give the game a chance was that while the premise sounded silly it was interesting enough that I thought it could be better than I expected. Speech Breaker has some interesting ideas but fails due to the premise not working that well and the underlying gameplay being pretty generic.

How to Play Speech Breaker

Each round begins with the current reporter putting the headphones on their head and taking the microphone. They will press the button on the microphone which starts the round. The player’s report will begin with the player saying “Reporting live from the scene”. The current reporter will then take the top card. The player can choose which of the scenarios they would like to describe on the card but the timer is running while they decide.

The player will have 30 seconds to describe the scene. You can describe the scene however you want but you may not use any of the words printed on the card. The goal is to get your teammates at the end of the report (they cannot speak until the report is over) to correctly guess the who, what, and where printed on the card. When describing the scene you need to hold the microphone close to your mouth. After a couple seconds the audio recorded by the microphone will be repeated through the headphones to try and distract you. After 30 seconds have passed you will hear a static sound over the headphones which indicates the end of the report. At this point you are unable to add anything to your report. 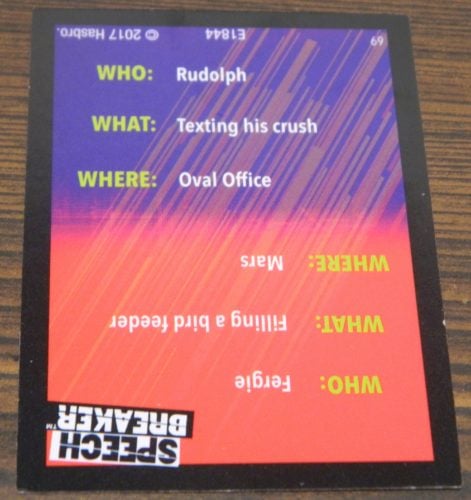 For this round the reporter could describe the top scene as follows: A male reindeer with a red nose is typing a message on their phone to their significant other in the room where the president of the United States works.

Your teammates will then try to guess what scene you were trying to describe. If your teammates correctly guess the who, what, and where your team will take the card which will count as one point at the end of the game. If they miss one or more of the items you will fail the round and the cards will be discarded. When players provide similar but not exact matches to the items listed on the card, all of the players have to agree on whether the answer counts.

The round then ends and play passes to a player on the other team.

The game will continue until all of the players have had three chances to report. Each team will then count up how many cards they acquired during the game. The team to acquire the most cards wins the game. If there is a tie both teams choose their best reporters. You will play additional rounds until one team incorrectly guesses the scene. The other team wins the game.

My Thoughts on Speech Breaker

When most people see Speech Breaker the first thing that is going to stick out is the microphone. The microphone and the headphones are a major component in the game after all. While I was skeptical about how they would work, I was curious about this aspect of the game as I haven’t really ever played a board game that has utilized voice jamming before. I thought this mechanic was just going to be a gimmick, but it was interesting enough that I wanted to give it a try.

The voice jamming aspect of the game has problems but I was genuinely surprised that it is more than just a gimmick. Basically when you talk into the microphone it records what you say. After a couple seconds it starts repeating what you just said. Thus while you are talking to the other players, what you hear is what you said a couple seconds earlier. I was skeptical of this mechanic because I didn’t think it would have much impact on the game. How hard would it really be to describe an event while hearing things that you said a few seconds earlier?

As it turns out it actually has quite a bit of impact on the game. To get the full effect you must hold the microphone pretty close to your mouth or otherwise the repeating element is weakened. While it seems to effect some players more than others it has a much bigger effect on the game than I could have imagined. Hearing things you said a few seconds earlier can really mess with your thinking as you have to think about what you are going to say while also trying to block out what is being repeated in the headphones. At least with the players that I played the game with this lead to the players talking quite a bit slower than they would typically. While this is quite silly it does lead to some laughs early on as some players will talk quite a bit differently than they normally would.

While you can have some laughs early on, they don’t really last. One of the reasons why the game gets repetitive pretty quickly is that the microphone and headphones just aren’t made all that well. They just feel kind of cheap. The audio repetition works for the most part but the quality of the recording isn’t great. This is probably mostly because the headphones are pretty bad. On top of this the headphones are quite loud and there is no way to adjust the volume. As you have to hold the microphone pretty close to your mouth for the repetition to work well, you can’t talk too loudly or it will start blaring into your ears. The microphone also catches what the other players say or when they laugh which can really mess with you. The component quality doesn’t ruin the game but it doesn’t help.

I would say that the biggest problem with Speech Breaker though is that outside of the microphone/headphones the game is not particularly original. While I can’t think of the title of a specific game off the top of my head, there have been many board games created over the years that have utilized the premise of trying to describe a scene to your partners without using specific words printed on a card. At its core this mechanic can be somewhat enjoyable. It is kind of fun trying to describe a scene so your partners can guess it without using specific words. The mechanic is also pretty simple where you can teach the game to new players within a minute or two. The problem is that Speech Breaker does nothing to add to the mechanic.

I think one of the problems comes from the cards. The game includes 100 cards with four scenes on each card. This is a decent amount of scenes but a lot of them aren’t very good. There are two main problems with the cards. First the cards can be quite random. It honestly felt like for a lot of the cards the designer(s) randomly picked a person, action and a place out of a hat and combined them together to form a scene. There is no real thought put behind any of the scenes as a lot of them don’t even make logistical sense. This can lead to a few laughs as some of the scenes are just downright ridiculous. Most of them are just too silly though.

The other problem that I had with the cards is that almost every scene had at least one element that was very hard to describe. I didn’t really know who some of the people were or at least not enough where I could actually describe them and have my teammates guess correctly. It is not just the people though as the actions and locations can be quite random as well. Good luck figuring out how to describe some of the actions and/or locations. If you actually are able to come up with a way to describe them you likely will have to use up most of your time just describing that one element of the scene. As some of these can be quite hard it adds quite a bit of luck to the game as you hope to draw one of the easier cards.

For this reason the game lets you choose which of the scenes you would like to use. The problem is that while you debate which scene to do you are using up your 30 seconds. Thirty seconds might seem like a decent amount of time, but it is not as much as you would expect unless you have a really simple scene to describe. Therefore you can’t waste a lot of time determining which of the four scenes you are going to describe as you otherwise will run out of time. For this reason we decided to let players draw their card as well as choose which scene they wanted to describe before the timer even started. This doesn’t completely fix the problem, but it does help.

Should You Buy Speech Breaker?

Ultimately Speech Breaker surprised me in some ways and disappointed me in others. I can’t say that I had high expectations for the game. This was mostly because I felt that the microphone/headphones were going to just be a gimmick as how much could hearing your own voice back on a delay really effect you. Well it turns out that this can actually have a pretty big impact on the game. Hearing your own voice on a delay can mess with you which makes it harder to concentrate on the scene you are trying to describe. This can lead to some funny moments as well as some fun. Unfortunately it doesn’t really last as the game gets kind of repetitive after a while. This isn’t helped by the cards. Most of the scenes in the game feel like they were literally drawn out of a hat. Many of the scenes also have things that are going to be really hard to describe to your teammates especially as the game doesn’t give you a lot of time.

As far as a recommendation it is kind of complicated. If the premise doesn’t sound interesting to you, I would be surprised if you enjoyed Speech Breaker. People who think the premise sounds interesting could have some fun with the game, but it probably still won’t be for everyone. For this reason and the fact that the game gets repetitive pretty quickly, I would only consider recommending Speech Breaker if you can get a really good deal on the game.

If you would like to purchase Speech Breaker you can find it online: Amazon