Having played around 500 different board games, you tend to run into the same board game mechanics used over and over again in different combinations to create new games. Rarely do I run across a mechanics that I haven’t seen used in other games. Today’s game Snapshot actually has a unique mechanic that I have not seen used much in board games. In Snapshot you try to guess what a picture is of while only being able to see a small section of it. While this mechanic has been used by a couple board games in the past, I don’t remember playing any games that have used it. When I first looked at Snapshot I really didn’t have high expectations and only bought it because it was $0.50. While it is far from a great game, I have to say that I was a little surprised by Snapshot.

How to Play Snapshot

Place all of the number chips face down on the table. Put the stack of cards on the table near the camera. Place the photo shield (blank card) on top of the stack of cards. To begin the first round one of the players grab one of the cards using the photo shield so they don’t see the picture on the card. They insert the card into the camera making sure all of the number windows are covering up the picture. The player removes the picture shield and the board is ready for the first round.

On a player’s turn they select one of the number chips. The number on the chip they selected is the door on the camera that they flip open revealing part of the picture. The player can then either make a guess on what the picture is or they can pass the camera to the next player who then takes their turn. 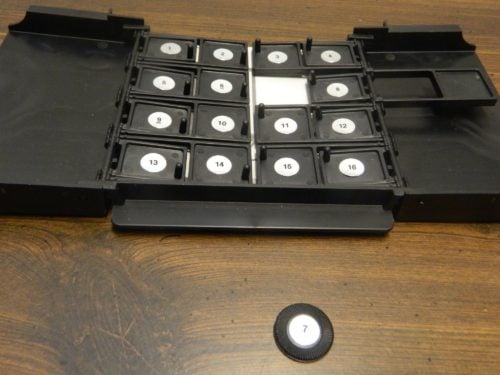 This player drew the number seven. The seven door is opened to reveal part of the picture.

If the player decides to make a guess they announce their guess and look at the picture (without letting the other players see). If they are correct they score one point and they reveal the picture to the rest of the players. If they are wrong they will lose two points (unless they are on the start space of the gameboard) and won’t be able to make another guess in the current round. The round continues until one of the players correctly guess the picture or all of the players guess incorrectly. Another round is then played with a new picture put in the gameboard and all of the chips being flipped face down. 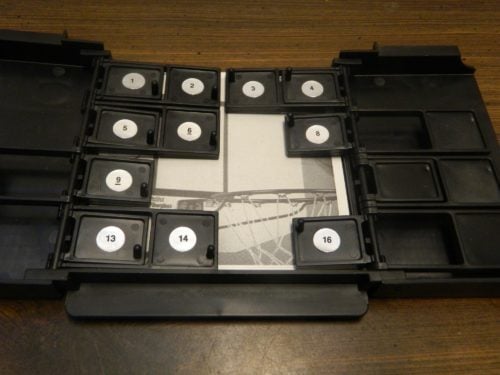 The current player is pretty confident that the picture is of a basketball hoop. The player will score one point for guessing correctly.

The first player to reach twelve points wins the game. 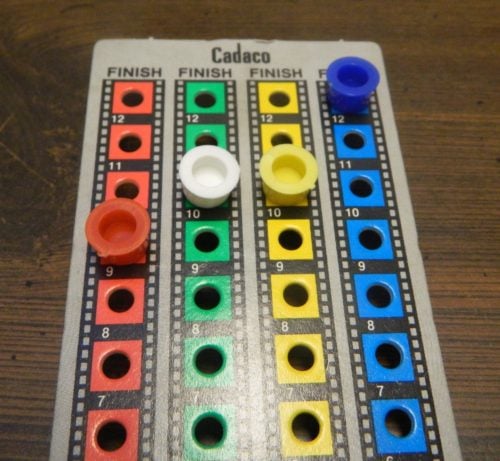 The blue player has won the game because they were the first player to reach twelve points.

My Thoughts on Snapshot

While there are other board games that have used a similar mechanic (Concentration comes to mind), I honestly can’t remember a game that I have played that actually plays like Snapshot. The game kind of plays like a deduction game as you are trying to figure out what the picture is. At the same time though Snapshot plays like a party game where you don’t put a lot of thought into the game and are just trying to have some fun.

As I have already mentioned, I was a little surprised by Snapshot. I thought the game was going to be pretty bad since I had never heard of it before and it looked kind of cheap. Anyone seeing the box on a store shelf would probably come to the same conclusion that I did. While it is far from a great game I actually enjoyed my time with Snapshot even though it lasted a little too long. The mechanic of trying to guess what a picture was by just seeing parts of it was more enjoyable than I was expecting. It is not the best mechanic ever but it is a nice change of pace from the mechanics you regularly see in every other board game.

Before I played Snapshot I thought the game was going to be really easy. I thought how hard could it be to guess what a picture was with part of the picture being covered up? While the game is not particularly difficult, the game can actually trick you more than you would think. Not being able to see the whole picture can actually really mess with you at times. You could be positive that the picture is one object and then one window will be opened and your opinion will totally change. For example in one of the rounds of the game that I played one player thought the picture was a horse based on the windows that were opened. Just a window or two later you could tell that the picture was of Santa Claus. This is just one example of how much a couple windows can significantly change your perception of a picture.

One thing that I didn’t really like before I started playing Snapshot was the fact that you had to draw chips in order to see what window you got to open. I didn’t love this mechanic because I don’t like when games take choices away from the players. After playing the game though I could tell why they force you to choose chips to open windows. If you were able to choose your own windows, players would always choose the windows in the middle of the board since for a large majority of the pictures the most revealing information is in the middle of the picture. It felt like 90% of the pictures that we used had little to no information in the corners so players would never choose to open these windows until the very end unless they had no choice. While it would have been nice to have a choice in what window to open, I think the choice would have ruined the game.

By far the biggest problem that I have with Snapshot is the fact that you lose points when you incorrectly guess a picture. The main reason that I hate this mechanic is that it basically stops players from taking any chances in the game. In Snapshot it takes a while to actually guess a picture correctly and earn a point. By incorrectly guessing once you end up losing two points. Losing two points discourages players from taking chances. Unless you are playing with a bunch of risky players, everyone plays really conservatively which makes every round drag on for too long.

The biggest problem with this mechanic is that I think there is already enough punishment without losing points to prevent players from randomly guessing. If you guess wrong you are eliminated from the round which gives all of the other players a better chance at guessing the correct answer. This punishment is strong enough to stop people from wildly guessing but also is not so harsh that people are afraid to take guesses. Snapshot is a significantly better game when players are actually willing to make guesses instead of just waiting for most of the picture to be revealed.

The other significant problem that I had with Snapshot is that the game takes too long to finish. Our group eliminated the rule where you lose points for incorrect guesses and the game still took around an hour to finish. If we didn’t get rid of that rule it would have taken even longer. The problem is that Snapshot is a game that is probably best as a 30-45 minute game and I can’t see many games of Snapshot taking less than an hour. While the game is fun, it really starts to drag near the end to the point that you just want it to end. I personally would recommend only playing the game for eight or so points since this would likely make the game around 30-45 minutes long.

Snapshot’s components are kind of hit and miss. The chips and scoring board feel really cheap. While I applaud the game for the number of pictures, the pictures are printed on pretty thin paper. The camera/gameboard is actually kind of clever though. While my pictures don’t really show it, when the gameboard is shut is actually looks like a camera. The windows open and close pretty easily revealing parts of the picture and are easy to work with. I will say that it takes a little too long to reset between rounds though.

Should You Buy Snapshot?

While Snapshot is far from a great game, it actually surprised me with how solid it was. The idea of trying to figure out what a picture was showing just by seeing part of it is a fun little mechanic that I really haven’t seen used very often in other board games. While some of the pictures are really straightforward, there are pictures that can be surprisingly deceptive. I hate the rule that you lose points for guessing incorrectly though and I think the game lasts too long. I was surprised by how much fun I had with Snapshot though.

If the game’s premise doesn’t interest you, I don’t see you enjoying Snapshot. If you are intrigued by the concept and can find Snapshot for cheap though I think it might be worth picking up.

If you would like to purchase Snapshot you can find it online: Amazon