While it was pretty obvious that First to Reverse was a generic children’s roll and move game, the one thing that intrigued me about the game was the idea that each player uses a different form of transportation. In the game you have a roller skater facing off against a cyclist, a motorcyclist, and a race car driver. Sticking to the fact that each of these modes of transportation move at different speeds, the characters also move at different speeds with each player player using a different distribution of dice. To make the game balanced though, the characters with faster modes of transportation have to travel a longer distance. While I didn’t think this mechanic was going to drastically improve the game, I was interested in seeing how it would turn out. Unfortunately while the mechanic had potential, First to Reverse ends up relying entirely on dice roll luck.

How to Play First to Reverse

Each player chooses a racer and takes the corresponding die/dice. All of the racers are put behind the start line. Players sit in the order based on the racer they chose. The first player is the roller skater followed by the bicycle, motorcycle, and finally the race car.

On a player’s turn they roll their die/dice and move their piece the corresponding number of spaces. 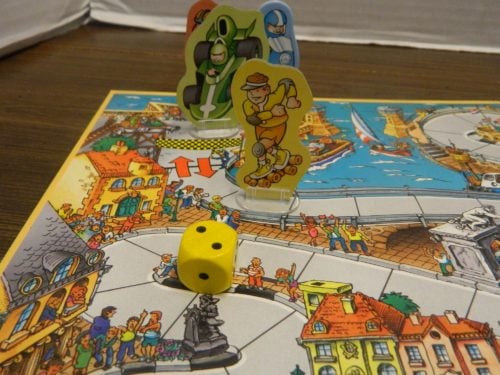 The yellow player has rolled a two so they move their piece two spaces.

If a player would land on a space occupied by another player, they have to pass their turn. 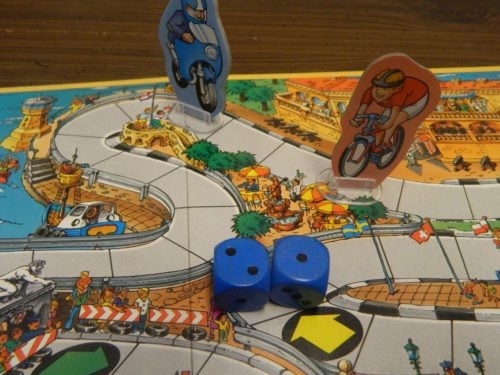 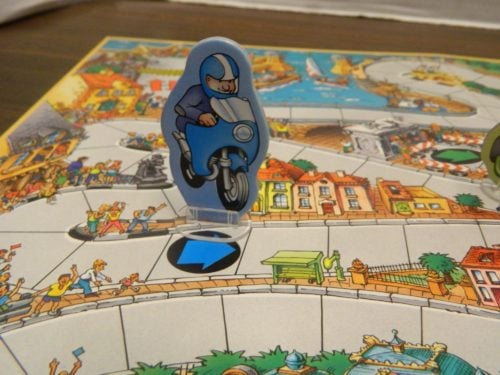 The blue player has reached their reverse spot. All of the other players will now race back to the start.

The first player to cross the finish line wins the game. All of the other players continue playing to determine the rest of the positions. 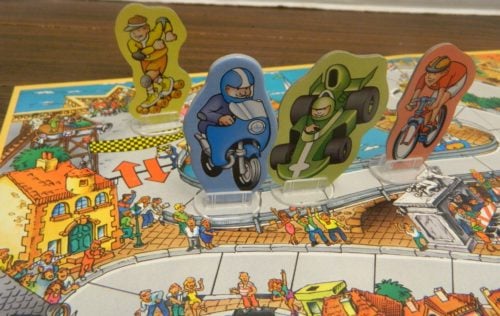 The yellow was the first player to reach the finish line so they won the game.

My Thoughts on First to Reverse

As I mentioned at the beginning of this review I was intrigued by the mechanic that every player in First to Reverse uses different sets of dice. While a similar mechanic has been used in some games, I really haven’t seen it used as much as you would expect. The games that use this type of mechanic are usually more complicated games so I was surprised when I saw it in a children’s game. I was interested in seeing how the mechanic would work in a pure roll and move game since it might add a unique mechanic to a genre that rarely does anything new. While the mechanic works exactly how I imagined it would, First to Reverse has nothing else going for it.

While it really doesn’t change anything in the game, I still liked the different modes of transportation in the game. In First to Reverse you can choose from one of four types of transportation. The roller skater gets one die with numbers 1-3 on it. The bicyclist gets one die with numbers 1-6 on it. The motorcyclist gets one 1-3 die and one 1-6 die. Finally the race car driver gets two 1-6 dice. With this breakdown it is not surprising that the motorcycle and the race car generally speed past the other players early in the game. While this sounds nice it also means that they have to travel further to get back to the start. This actually creates an interesting end game where the slower pieces are slowly inching towards the end while the faster pieces are quickly catching up. The question becomes whether the faster pieces can catch up to the slower pieces in time.

When looking at board games one of the biggest factors that determine how it will play is the luck to strategy ratio. Due to only making one decision in the entire game (choosing your playing piece) the game relies entirely on rolling the die/dice. You make no decisions in the game and unless you somehow are really good at rolling dice, you have no impact on your fate in the game. Whoever rolls the best will win the game since nothing else impacts the game. There is nothing you can do in the entire game that can improve your chances of winning the game.

Most players are probably going to believe that either the sports car or the roller skater are the best pieces to choose. The sports car has the advantage of moving the fastest while the roller skater has to move the fewest spaces. The game claims that every player has an equal chance of winning the game and I have to believe that is the case since I would think it would be pretty easy to design the board to make everyone’s chances equal.

While I think each player has an equal chance of winning the game, the different modes of transportation do play significantly different though. Basically I see the bike and roller skates as the slow but steady route while the motorcycle and race car have much higher risk/reward. To illustrate this point I will compare the race car to the roller skater. The roller skater can only roll between one and three. Since there is not a lot of difference between the best and worst roll, you really can’t roll too well or too poorly as the roller skater. Meanwhile the sports car can roll between a two and twelve.There is a large difference between these two numbers so the race car player is going to have to roll well in the second half of the game if they want any chance of winning the game.

This is why I don’t like that there is no reason why you would want to be the player who reaches their reverse spot. If you reach your reverse spot it means that you moved the maximum number of spaces that you could in the first half of the game. This also means that the other players didn’t have to move all of their spaces and thus don’t have to move as far in the second half of the game. The only benefit you get from reaching your turning point is that you can use any excess spaces on the last roll to start moving towards the finish line. These spaces are unlikely to offset the advantage the other players have already gained in the game. Basically the only way the player who reached their turning point can win the game is if they roll well the entire game which is unlikely.

Component wise First to Reverse is similar to a lot of Ravensburger games. I am not a huge fan of the playing pieces but I otherwise think the components are pretty good. I like the wooden dice. The game’s artwork is nice and the gameboard is pretty thick. Basically there really isn’t much to complain about as far as the components are concerned.

Basically First to Reverse is what you would expect out of a children’s roll and move game. The game is really easy to play and as long as a child is able to count up to twelve they should have no problem playing it. The problem with the game though is that the game has no decisions which makes it pretty boring for adults. Basically adults have to just sit there and wait until the winner is decided by who rolls the best. While First to Reverse is better than a decent amount of children’s roll and move games, it still isn’t a very good game.

Should You Buy First to Reverse?

Before playing First to Reverse I was intrigued by the fact that each player used a different mode of transportation that had a different distribution of dice. While I think this mechanic is interesting, it just doesn’t do a lot in the game. After deciding which pawn you are going to use, there are no decisions in the game. This basically means that your fate in the game is totally reliant on your dice rolling skills. The player who either rolls well for the entire game or rolls poorly in the first half and well in the second half is going to win the game every time.

While First to Reverse has some interesting mechanics, it just doesn’t work right. I really can’t see adults enjoying the game since there are no decisions to make in the game. I think younger children could get some enjoyment out of the game though since it is quick and easy to play. If you have younger children and can find a good deal on First to Reverse I think it might be worth picking up.

If you would like to purchase First to Reverse you can find it online: Amazon

The Jetsons Game Board Game Review and Rules
Click here to cancel reply.

Thanks, I got this used with no rules and couldn't figure out the way to use the dice to play.