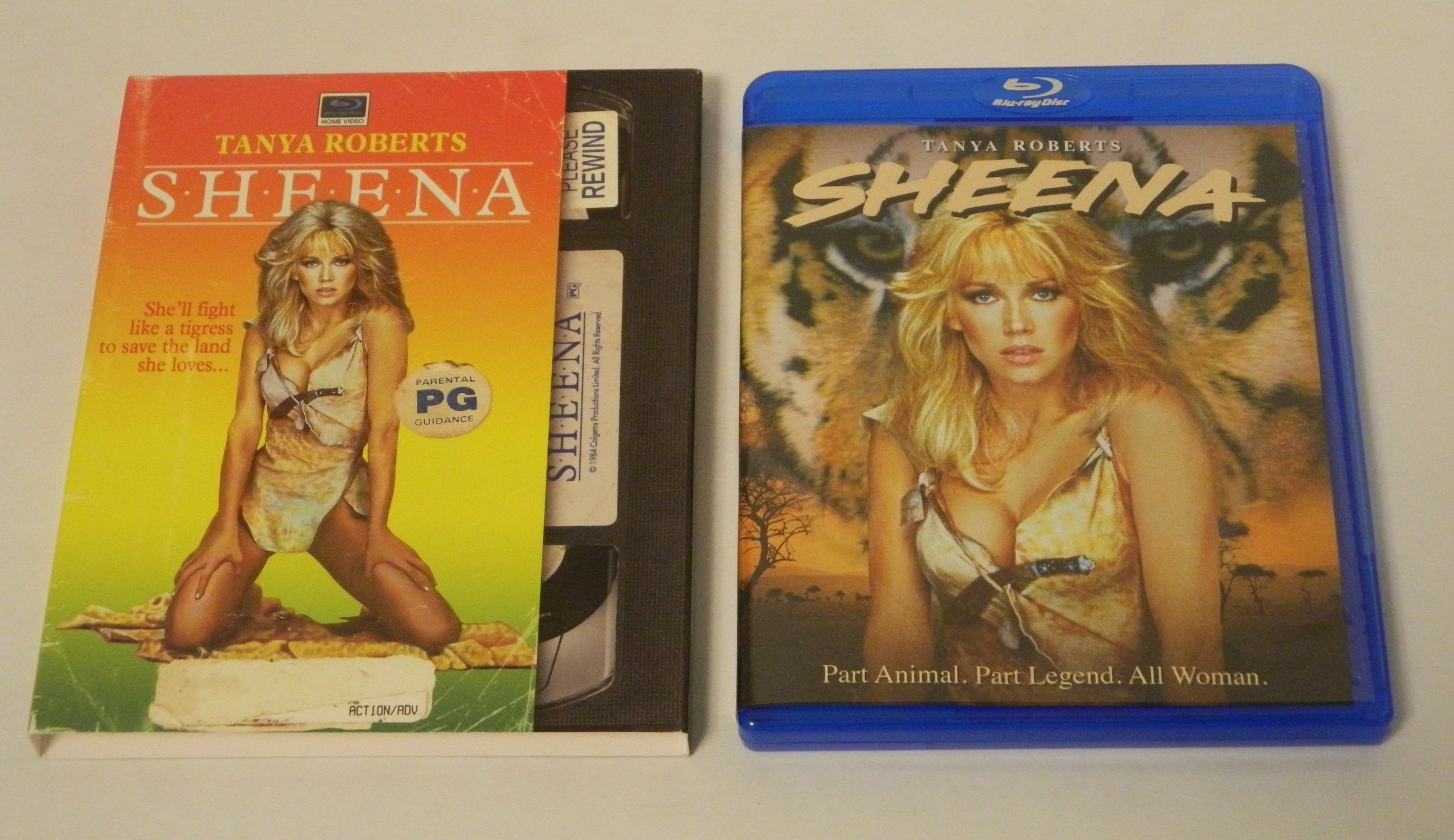 Longtime readers of Geeky Hobbies likely know about my affinity for great B-movies. While I enjoy critically-acclaimed films and legitimately good popcorn flicks as much as anyone, a good B-movie can be almost as entertaining as them even if they are absolute garbage from a film-making standpoint. Sometimes it’s just fun to watch a bad movie and poke fun at the sheer ridiculousness of them (the terrible acting, the stupid plots that make no sense, and the laughably bad special effects). Sheena isn’t your typical B-movie though, there was actually a lot of love and craft put into the film’s production (it even shot on location in Africa!). However, there is also some unintentional humor and production issues (especially the infamous “zebras”) that makes it a pseudo B-movie in my book. Unfortunately though, Sheena ultimately fits into that unfortunate gray area of not being quite bad enough to be a B-movie classic but also not good enough to be a serious film. It’s somewhat fun and certainly watchable, just not an amazing film to riff on.

Sheena stars future Bond girl Tanya Roberts (she would appear in A View to a Kill, one of the worst Bond films ever made, the year after this) as the titular character. Her parents were killed in a cave-in in Africa when she was a small girl. This fulfilled a prophecy and the local tribe adopts her as one of their own, giving her the title Sheena, Queen of the Jungle. This gives her the power of telepathic communication with wild animals. Unfortunately, her tribe is in trouble as their Americanized Prince is plotting to kill the King for the valuables their land holds. Sheena, along with a sportscaster and a skeevy cameraman (who are in Africa to film a segment about the Prince since he is a football player who can somehow kick 68 yard field goals regularly), become entangled in this conspiracy. Ultimately, Sheena is pretty much a Tarzan film starring a scantily-clad woman instead of a buff dude.

The reason why I am giving Sheena an average review is that while there are some cheesy B-movie hijinks and some actually good content, most of the movie is composed of neither of the two. There’s some high production quality at times and then there’s funny B-movie things like a horse painted to play the roles of a zebra and a hilarious animal prison break starring a “zorse,” an elephant, and two monkeys. This film doesn’t know what it wants to be, in some areas the filmmakers are actually trying to make a good film and then in others, it feels like they are purposely being cheesy. The biggest problem is the film isn’t consistent, for every good scene or hilarious B-movie antic in the movie, there’s fifteen minutes of boring content. Sheena just isn’t consistently funny or good enough to warrant a better rating.

The highlights from a riffing standpoint include the infamous “zorses,” the amazing prison break scene (which is both funny and an actually good scene in my opinion), and some hilarious quotes like “You’re as dirty as a warthog.” In terms of things that the film actually does well, I have to give it a lot of credit for actually shooting it in Kenya. There is a lot of nice scenery in Sheena and it can oftentimes be a gorgeous film to watch. I also enjoyed nearly all of the animal scenes (and not always in a B-movie way). These scenes are mostly charming and can sometimes be legitimately funny (like a monkey covering for the sportscaster’s sneeze).

From the previous paragraph, you would think that Sheena is a good mix of B-movie hilarity and actually decent filmmaking. Unfortunately, the film is far too long at a 116 minute run time and the majority of the time is spent on a cheesy and oftentimes awkward romance and other even more boring scenes. Sheena could have been a great mix of funny B-movie content and actually good film-making, but it squanders its opportunities more often than not. Also, Tanya Roberts wasn’t a very good actress at this point in her career. She clearly wasn’t cast for her acting ability in the first place (this is definitely a looks over acting ability role), but her performance is pretty bad in this film.

One thing I definitely need to write about is this film’s MPAA rating. I know 1984 was a different time but Sheena has an awful lot of nudity for a film rated PG. Tanya Roberts is nude on at least two occasions and wears the skimpiest outfit they could give her when she is actually clothed. For those into that kind of thing, this is likely a positive but for families, be aware that many would not consider this film to be family-friendly. Capping off the “why is Sheena rated PG?” question, there’s also a surprising amount of blood for a PG rated film. The film isn’t horrendously bloody or violent, just more than I would expect for a film that’s supposedly completely okay for families.

Normally, most viewers would think a cheesy ’80s film like Sheena would be completely okay to watch in standard definition. However, with it being shot in Africa and the gorgeous scenery the film provides, I think this film is definitely worth watching on Blu-ray (even considering its age). This Mill Creek Entertainment release (as part of a line of retro VHS cover art Blu-ray releases) is actually the film’s first appearance on Blu-ray. Unfortunately though, I wasn’t super impressed visually by this release. For a film with such gorgeous locations, it looks surprisingly mediocre on Blu-ray. It’s still a decent upgrade over the DVD but unless you are a huge fan of the film, I don’t think you necessarily have to upgrade your DVD to Blu-ray. I’ve said in my other reviews of these retro VHS cover art releases that I love the slipcovers but don’t really think it is worth purchasing the title over again just for a change in slipcover. Since this is the first time Sheena has been on Blu-ray, that is completely irrelevant in this case. The slipcover does look nice but the main thing with this release is that it’s the film’s first appearance on Blu-ray.

Ultimately, outside of the “zorses,” Sheena is a more capable film than you would think. If it weren’t for the long stretches of boring content, Sheena might have been an entertaining B-movie that could have even brought in some serious film fans as well. Cut a half hour off the run time and you might have a fun and actually good film. Even with the overly long run time, the film is still worthy of a 2.5/5, it just could have been an all-time great B-movie with some changes.

Note: For reviews of other Mill Creek Entertainment retro VHS cover art Blu-rays, check out our reviews of the first wave of releases (focusing on Who’s Harry Crumb? and Krull) and the second wave (featuring Neighbors).