Everything retro has become cool again over the last decade, from vinyl records to retro games. One particular media format that took awhile to return to prominence but is now starting to get hotter and hotter is the VHS tape. While there have always been collectors of the admittedly outdated format, it is starting to have a vinyl record-esque renaissance lately. Hoping to cash in on the VHS revival, Mill Creek Entertainment recently released a line of Blu-ray sets with retro VHS style slipcovers as a Walmart exclusive. Those releases proved popular enough that they are now getting a wide release in a few days.

Since the only thing different from these releases and past Mill Creek releases of these titles is the slipcover, I’m going to start this review in a different way than usual and focus on the packaging first. The slipcovers are great, almost to the point of being art, and I can definitely see collectors wanting to collect them all. No detail is missed from depictions of peeling rental stickers and melting warning labels to Krull and Hardbodies having the iconic RCA/Columbia black and red spine design. While the artwork for each of these six releases is similar enough that they’ll look great on a shelf next to each other, they also each have a nice unique touch to them. I will say though that it is slightly disappointing that the actual case art is the same as Mill Creek’s prior releases and not the art on the slipcover or some other neat piece of artwork. However, as long as you aren’t a slipcover hater (or one who throws them in the trash), this isn’t a huge deal as you won’t be looking at the interior art very often anyway. It would have been cool if Mill Creek Entertainment would have continued the VHS style slipcover art to the box and possibly even disc art though. 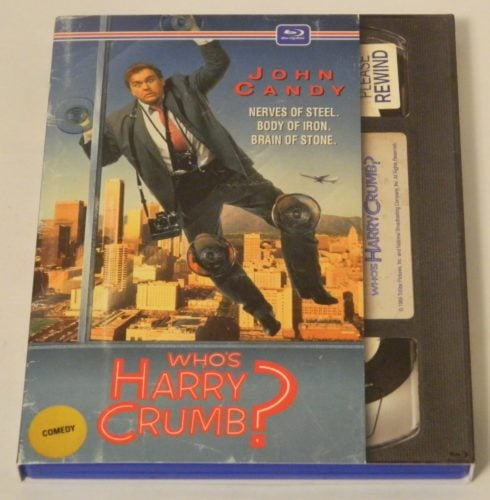 I requested two of these releases for review, Krull and the only new to Blu-ray release in this line (Who’s Harry Crumb?). Since Who’s Harry Crumb? is actually new to Blu-ray, I’ll be spending a more time reviewing it than Krull (which was much more dull than I was expecting it to be). Who’s Harry Crumb? features John Candy as the title character, a charming and confident yet usually completely inept detective working for his family’s P.I. firm. Even though he is the last Crumb left, he is working at one of their small branch offices until he gets called in by the President of the firm, Eliot Draisen (Jeffrey Jones), to solve the kidnapping of a millionaire’s daughter. He has a very good reason for calling on a bumbling detective to do the job (which I won’t spoil here). The rest of the film is Harry Crumb trying to solve the crime (while bumbling around) with the help of the millionaire’s younger daughter (Shawnee Smith).

Who’s Harry Crumb? was a film I have been meaning to watch for a long time. I almost always like comedy films featuring professionals who are terrible at their job. From The Naked Gun to Johnny English, I pretty much love them all. While I wouldn’t say Who’s Harry Crumb? is as good as those two films, it is a very good comedy that deserves more acclaim than it has received. Candy isn’t quite as hilarious as usual, but there are still plenty of laughs to be had throughout the film. Most of the comedy is of the slapstick variety but it’s good slapstick that will often surprise you. The funniest gag involves Crumb attempting to throw a fish off his finger and it lands onto a fishing photograph in the perfect spot. If that’s the sort of humor you love, you’ll almost certainly enjoy Who’s Harry Crumb?.

Other than the comedy though, there isn’t really much to talk about with Who’s Harry Crumb? The story is a bit twisty but really doesn’t cover any new ground (bumbling detectives are a dime a dozen). However, I’m pretty sure most people could care less about the story. They just want to see John Candy make them laugh. In that regard, Who’s Harry Crumb? overall succeeds even though it is at best a middle-of-the-road Candy comedy. 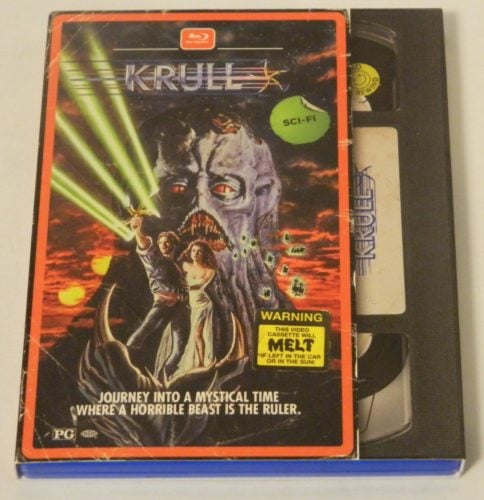 As a fan of B-movies and riffing on them, Krull has always been on my list of films to check out some time. Unfortunately, Krull fits into the dreaded category where it isn’t good enough to watch but it is also isn’t bad enough to work as great B-movie material. Ultimately, it is just a mediocre and rather dull ’80s sci-fi/fantasy film even though on paper it has a lot going for it. It’s cast includes a young Liam Neeson and Robbie Coltrane (Hagrid from Harry Potter) and the movie is scored by James Horner (a legendary composer known for the second and third Star Trek films, Avatar, and about a hundred other film scores).

Krull can pretty easily be described as a combination of The Lord of the Rings and Star Wars, though much, much worse than either of those two classics. This was one of the many films trying to make a quick buck off the popularity of the Star Wars series but I would say the fantasy portion of the film is actually the main emphasis. The film is about an alien race who travels the galaxy in a spaceship that looks like a mountain. The Black Fortress arrives in the middle of a wedding and after a fight scene, the princess is captured. The prince who was about to marry her must embark on a journey to find and storm the castle with a motley band of criminals.

You would think a film from the ’80s trying to recreate the magic of The Lord of the Rings books and Star Wars would be hilariously awful. That’s what I thought at least and it’s why I wanted to watch the film. Unfortunately, it isn’t nearly as inept as I thought it would be. There are some things to laugh at here or there (the glaive which looks like a fidget spinner and the special effects are two of the biggest riffing targets) but overall Krull just isn’t that bad of a movie. Making things even worse, it also doesn’t work as a good movie either. The film is far too long, there aren’t many exciting or interesting scenes, and the film is quite dull when there isn’t anything to laugh at. Add all that up and Krull is a slightly below average film that doesn’t quite have the markings of a great B-movie either.

Since this is the first time Who’s Harry Crumb? has been released on Blu-ray, the video quality is of course an important topic to this review. I was surprised with how good the film looks in high-definition. For a film from the late ’80s, it looks great (if not even on par with more recent films). There aren’t a ton of scenes you really need to see in high-definition, but it is probably still worth the upgrade if you enjoy the film. Krull should be the same transfer as the prior Mill Creek Entertainment release of the film. It looks good for a cheesy ’80s movie but not amazing.

While I wouldn’t say I’m an avid collector of VHS, I do pick up ones not available on DVD or ones I know I’ll never find on a more updated format so these releases are definitely appealing to me. I do love old-school VHS box art and the various rental stickers that would be placed on them. These releases do a great job of recreating that ’80s look even though Mill Creek could have went a little further and changed the case and disc art as well. I’m not sure a simple slipcover change is enough to re-buy these releases but if you don’t already own them, the slipcover artwork on these is definitely better than the original releases. For Who’s Harry Crumb? this is the first time it has been released on Blu-ray and if video quality is important to you, it is probably worth the upgrade to Blu-ray.