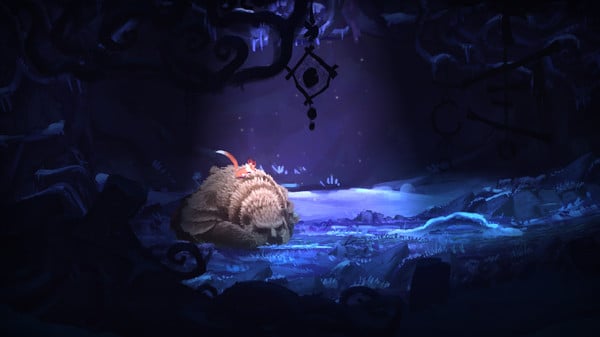 Seasons After Fall is a puzzle platformer at its’ core. There are no enemies in the game and only in very rare circumstances can you “die”. If you miss a jump you just have to backtrack to get back to the place where you missed the jump and try again. As a whole the platforming isn’t particularly challenging as you basically just jump between platforms. There really aren’t any situations where you need to make split second jumps or time your jumps perfectly. This is good news because the game’s controls aren’t perfect. It takes a while to adjust to the jumping mechanics and the fox doesn’t control as well as I would have liked. These are mostly just annoyances since while they will sometimes lead to you missing a jump you never lose a lot of progress so they don’t affect the game that much.

The biggest mechanic in the game is the puzzle solving. The puzzle solving comes from the ability to change the current season. This ability to change the seasons provides most of the puzzle solving in the game. To begin the game you don’t have access to all of the seasons but you will eventually acquire the ability to switch between all of them at any given time. The seasons come into play as each season changes the environment around you. For example in the winter water freezes. In the spring it rains raising water levels. In the fall the wind picks up which creates wind bursts. The game switches between these different mechanics in order to create some interesting puzzles.

For the most part I loved this season changing mechanic. While I think the puzzles are kind of easy early in the game, the difficulty picks up. The puzzles never becoming really challenging but they do make you think. In general I would classify the puzzles as moderately challenging. One puzzle around the middle of the game is somewhat challenging as it takes some time to figure out exactly what you are supposed to do but it is not that hard once you figure out what to do. The puzzles are for the most part pretty straightforward but the game does such a great job blending the different mechanics together to make some interesting puzzles. Once you have gotten the ability to use all of the seasons the game does a good job forcing you to regularly change seasons in order to take advantage of the different seasons. If you like puzzle platformers you should really enjoy Seasons After Fall since it does a good job using the game’s theme to create a fun and interesting puzzle platformer.

Usually I don’t really care much about a game’s graphics. As long as they aren’t distracting I don’t care that much about them. With that said I have to say that Seasons After Fall is a gorgeous game. The game is 2D but the artwork is stunning at times. The game has a hand painted style and it really stands out. Each time you change the seasons the main elements may stay the same but each season has its own tweaks like snowflakes or leaves. While Seasons After Fall would still have been a good game even if the graphics were average, the graphics do make Seasons After Fall a more engaging experience.

In addition to the game’s graphics, the overall presentation of the game is fantastic. The game’s soundtrack is great and really sets the mood for the game. The voicework is really good. I enjoyed the story for the most part even though it leaves a lot of things up to interpretation.

The problem with a lot of puzzle platformers comes from length. A lot of puzzle platformers aren’t as long as you would hope. That isn’t the case with Seasons After Fall. The game’s story will take most people around seven to nine hours to complete. I completed the story and all but two of the achievements in just over eight hours. Seasons After Fall may not have a ton of replay value though. After finishing the game there isn’t really much to do other than replaying the game. While I really enjoyed Seasons After Fall I don’t see it as the type of game that I would replay right away.

Overall I really enjoyed my time with Seasons After Fall. The game is not perfect but it is a very good puzzle platformer. The ability to change the seasons is an original idea that leads to some great puzzle ideas. Add in the game’s fantastic presentation and Seasons After Fall is a game that people should play. The game’s controls could use a little work but they serve their purpose. The game also relies a little too much on backtracking and sometimes could give you a little more direction on what you are supposed to do next. These small issues are far from enough to ruin such a great game though. If the game’s theme interests you and you like puzzle platformers you should love Seasons After Fall.