To be the first player to get their cat token into the middle platform four times.

Each player takes a section of the game board and takes the cat of the same color. Everyone places their cat at the bottom space of their track and everyone resets their score marker to the lowest level.

Scat Cat can be played in two different ways. Players can choose to stop the game when one player reaches the center platform. The player whose cat made it to the middle platform gets a point. All of the players move their cats to their first space and a new round is started. Otherwise the game can be played as a free-for-all where players keep playing even if someone has reached the center platform.

When one player reaches the center platform for the fourth time, they win the game. 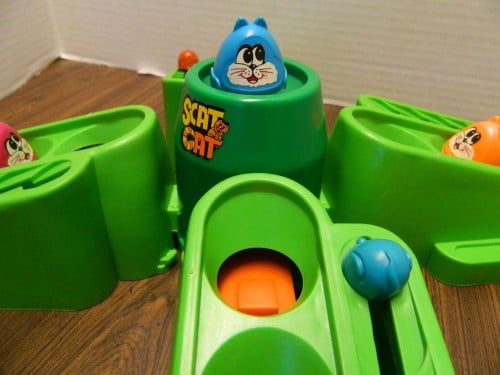 The blue player has won the game since they have reached the center platform for the fourth time.

Taking a look at the how to play section above you can probably tell how simple Scat Cat is. Essentially the only thing you do in the game is slam your button over and over again in order to launch your cat into the air. While you can develop a rhythm for when and how hard to hit the button, the game has no strategy and there isn’t a whole lot of skill involved either. Since the game has little strategy/skill, the game relies heavily on luck to determine a winner.

The game comes with a recommended age of 5+ and that seems about right. The instructions are really short taking only a minute or two to read and the game is so self explanatory that you don’t really even need to read the rules. Scat Cat has to be one of the shortest games that I have ever played. Rounds take at most 20 seconds and most games will last only three to five minutes. This short length actually works well for the game since Scat Cat is the type of game that works best in short bursts.

That Is Surprisingly Fun

With the entire game revolving around slamming a button, I thought I would hate Scat Cat. For some reason I actually had quite a bit more fun than I was expecting.

As a dumb time waster, Scat Cat is actually a fun game. Scat Cat definitely won’t challenge you mentally, but sometimes it is just fun to slam buttons and hope you end up being the ultimate victor. Since each round is so short, all of the players are only seconds from winning. The game has quite a bit of excitement as everyone slams their buttons as fast as possible to get their cat into the center space. Some rounds are so close that one player’s cat will end up pushing another player’s cat out of the center platform. Cats can go flying all over the board  including landing in one of the holes on another player’s side of the game board. I don’t know exactly why but my group got quite a bit of enjoyment out of seeing what would happen next that we ended up playing a couple games.

Even though the game is considerably more fun than I was expecting, it is still a very simple game. Scat Cat will definitely not be for everyone especially if you don’t like these simple children’s games. While we ended up playing a couple games, I don’t see Scat Cat as a game that I would play for long stretches of time. You would be better off playing for short stretches of time every so often.

For a game like Scat Cat that will endure a lot of wear and tear, the components needed to be well made or the game could have broken very easily. The copy of the game I found showed quite a few signs of wear but it still worked perfectly. I have to give the game credit for being made well enough that it could survive the beating that it most likely took.

For a game of its’ age (1960’s to early 1980’s), the components are actually pretty nice. While you can argue that the cat pieces don’t really look like cats, I like them since they work well. In most of these children’s games where you fling pieces, usually the pieces are not flung far enough or are flung too far. Scat Cat does a good job since the pieces are usually flung just the right distance. I kind of wish the game board had a little more detail though.

The thing that I liked most about Scat Cat’s components though was the box artwork. How could you not love box art that features gangster cats playing the game like it was a game of high stakes poker. Sometimes I wish newer board game boxes had some of the charm of these older games. You don’t really see this type of artwork in today’s board games.

Before playing Scat Cat I thought I was going to hate it. It was so simple and shallow that I couldn’t see it being a fun game. Despite only having one mechanic and next to no strategy/skill, Scat Cat is quite a bit more fun than you would imagine. Despite kind of being a dumb time waster, Scat Cat is a good game to waste a couple minutes with. I also can see it working really well as a family game since young children should be able to play the game.

That said Scat Cat is definitely not for everyone. If you don’t like these simple children’s game that require little to no skill, you won’t like Scat Cat. If you like these quirky kids games though you may enjoy the game more than you would expect.