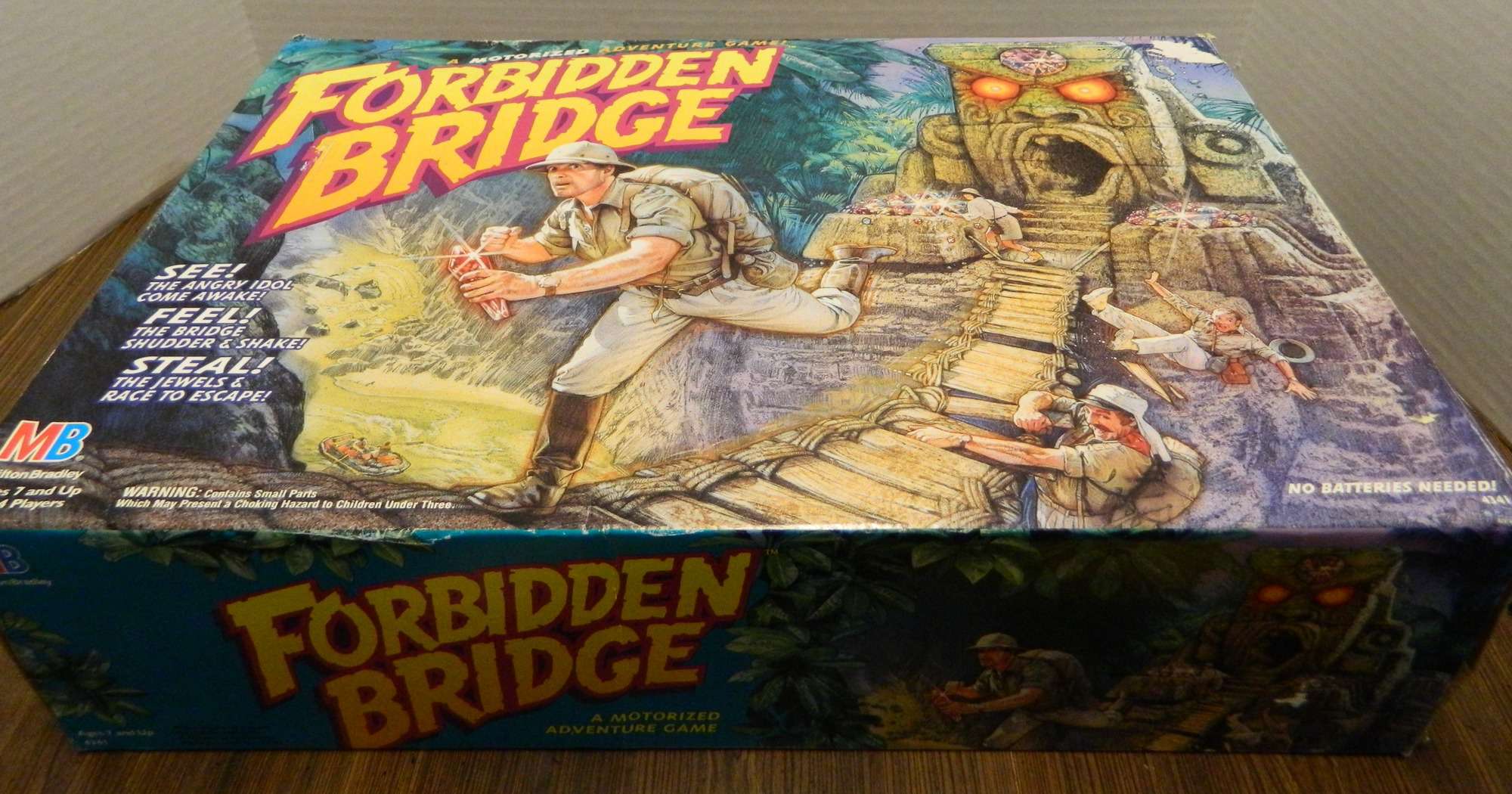 Be the first player to collect two jewels and return them to the finish space.

Assemble the game board. Place six jewels in each hand of the idol. The rest of the jewels will not be used in the game. Each player chooses a color and takes the corresponding explorer token and canoe. Each player places their token in their canoe and puts their canoe on the start space. The youngest player gets to go first.

At the beginning of a player’s turn, they roll both dice. The number die will tell how many spaces the player can move while the special die tells what special action will occur on this turn (more on this later). Each space/plank counts as one space and players can only move in one direction on each turn. A player can move in any direction as long as they are moving towards a jewel.

To begin the game each player must paddle down the river in order to reach the beach where they can dock their boats. Players may not move onto river spaces if they are not in their canoe. Exiting or entering your boat on the beach only counts as one space. After reaching the beach players will climb the cliff and cross the bridge to reach the Idol and acquire a jewel. When a player acquires a jewel from the idol, they stop immediately and must wait until their next turn to continue moving. After getting their first jewel a player needs to take it back to their boat in order to make it safe so other players can’t steal it. Once a player gets their second jewel they need to get in their canoe and head to the finish space.

In most situations several players can occupy the same space on the game board. Only one player may occupy each space on the cliff at a time. If a player lands on a cliff space already occupied they move to the next available space. Only two players can occupy the idol space at one time. If the idol space is already filled, players need to wait until one of the players leave.

The special die includes various symbols that give the player special abilities that they can use in addition to the number they rolled on the number die.

Falling Off the Bridge

When the bridge shakes, players’ explorer tokens or jewels may fall down or fall off the bridge entirely.

Any explorer that falls down stays where they fell until after that player has rolled the dice. If the player rolls the idol symbol they must activate the idol before picking up their piece. The player will then pick up their pawn and place it onto the space where the pawns head was resting. If the head rests between two different spaces, the player can choose which space they want to place their piece on. If the pawn’s head is in the river, the player places the pawn on the nearest land space. If the pawn is hanging from the bridge, the pawn is placed on the space that it is hanging from.

Jewels may also fall out of a player’s backpack. If the jewel falls onto a river space, it is returned to the idol. Otherwise the jewel stays on the space that it landed on. Any player with an empty backpack can then pick up the jewel. The player does not have to land on the space by exact count but their turn ends as soon as they pick up the jewel. If a jewel ends up falling into your canoe, you get to keep the jewel.

All the Pieces Come Tumbling Down

The most unique mechanic in Forbidden Bridge is the shaky bridge. Looking at the game it is easily the first thing that stands out. That is a good thing since this mechanic is pretty much the only thing in the entire game that distinguishes Forbidden Bridge from every other roll and move game that has ever come out.

It is hard to explain why but I dare anyone not to get a kick out of it for at least a while. While it is far from deep, it is fun to press down the idol’s head and start the bridge shaking. You will then anxiously watch to see if any of the pawns or jewels will fall off the bridge. It is especially interesting when a pawn is hanging onto the bridge for dear life. It is also quite satisfying to see a pawn or jewel fall off the bridge.

The bridge mechanic is interesting and adds some unique things to the game. Usually you don’t want to fall off the bridge since if you fall off near the idol you are going to lose a lot of progress and will have a hard time catching up. The closer you are to the idol when you fall, the farther you have to traverse to get back to where you previously were. What is strange though is sometimes you may want to be thrown off the bridge. If there is a jewel in the jungle below or you fall with your jewel still in your backpack or on a nearby space, you may actually save time by not having to cross the bridge to get back to your boat.

The biggest problem with Forbidden Bridge is that outside of the bridge there is nothing new to the game. The game is your typical roll and move game where you roll the dice while trying to collect jewels. The game adds a couple of mechanics where you can steal other player’s jewels or move them around on the bridge but neither really have an impact on the game. As a matter of fact no player was able to steal a single jewel during the entire game. It is just too hard to land on a space occupied by another player, roll the jewel symbol, and not already have a jewel in your backpack.

Being a simple roll and move game means that the game is easy to learn and pick up. While the instructions are considerably longer than you would expect, they probably only take five to ten minutes to read. The game is really easy to explain and children should have no trouble playing the game. I honestly think the recommended age of 7+ is a little high. Outside of the jewels being a choking hazard, I see Forbidden Bridge being the type of game that five year old children could play.

Due to the game’s simplicity, Forbidden Bridge is really more of a children’s game than a family game. That being said adults can have some fun playing the game. While I wouldn’t play the game all the time and I don’t think it is worth its’ cost (see below), I had some fun playing the game since it is such a unique experience. I just wish the game was more strategic since the winner will almost always be determined solely on luck.

Overall I have to give Milton Bradley credit for the components in Forbidden Bridge.

Despite being over twenty years old and showing a decent amount of wear, the Forbidden Bridge that I purchased still worked well. This is testament to the quality of the plastic components included with the game. The idol in particular looks really nice which includes a moving mouth and hands that shake the bridge. I just wish the idol shook the bridge a little harder to make more pawns fall off the bridge.

I love the pawns in Forbidden Bridge. They show a decent amount of detail and I just love the jaunty walking pose that all of the pawns are in. The game even has a backpack carved into the pawns in order to store jewels. The jewels fit nicely in the backpacks but not so tight that they can fall out if the explorer takes a tumble.

I only have a couple complaints with the components. First the cardboard pieces that build the wall around the bottom of the game board will get creased quickly. Second the jewels are kind of small so you could end up losing them easily. Unless you are willing to pony up quite a bit of money, it is unlikely you will find a copy of the game that includes all of the original jewels. Finally I think the dice could have been better. The dice kind of feel hollow which makes them roll kind of funny.

Forbidden Bridge is one of those classic 1980’s/early 1990’s games that tried to do something new but unfortunately was unsuccessful. Most of these type of games never sold well and thus not a lot of the games were ever produced. Due to their unique mechanics though, there are a lot of people that enjoyed these games which have made some of them quite collectible.

Forbidden Bridge is one of these games. At the time of this post the lowest price on Amazon was over $150 and that copy was missing some of the pieces. On Ebay you can expect to pay more than $100 for a complete copy and at least $60 for an incomplete copy. The two things that are driving the high prices for Forbidden Bridge is people’s nostalgia for the game and the fact that the game was unsuccessful so not a lot of copies were ever made.

While I thought Forbidden Bridge was decent and had some unique ideas, I could not see paying at least $60 for the game. The game is just not good enough to justify that price. The only way I could see paying that much for the game is if you have a lot of nostalgia for it.

Forbidden Bridge is an all around unique game. Where else can you play a board game where you try to cross a rickety bridge that it is violently shaken by an ancient idol. The bridge mechanic is interesting and could have made for a good game if it worked a little better. Unfortunately the rest of Forbidden Bridge is a pretty average roll and move game.

While I had fun playing Forbidden Bridge, I can’t really recommend picking up the game for one reason, price. Due to nostalgia and rarity, Forbidden Bridge games usually sell for at least $100. Unless you have a lot of nostalgia for the game, I just don’t see the game being worth that much money. If you like these quirky kid’s games though and you can find an affordable copy of the game I think you could have a decent amount of fun with the game. Just don’t expect to play the game all the time.