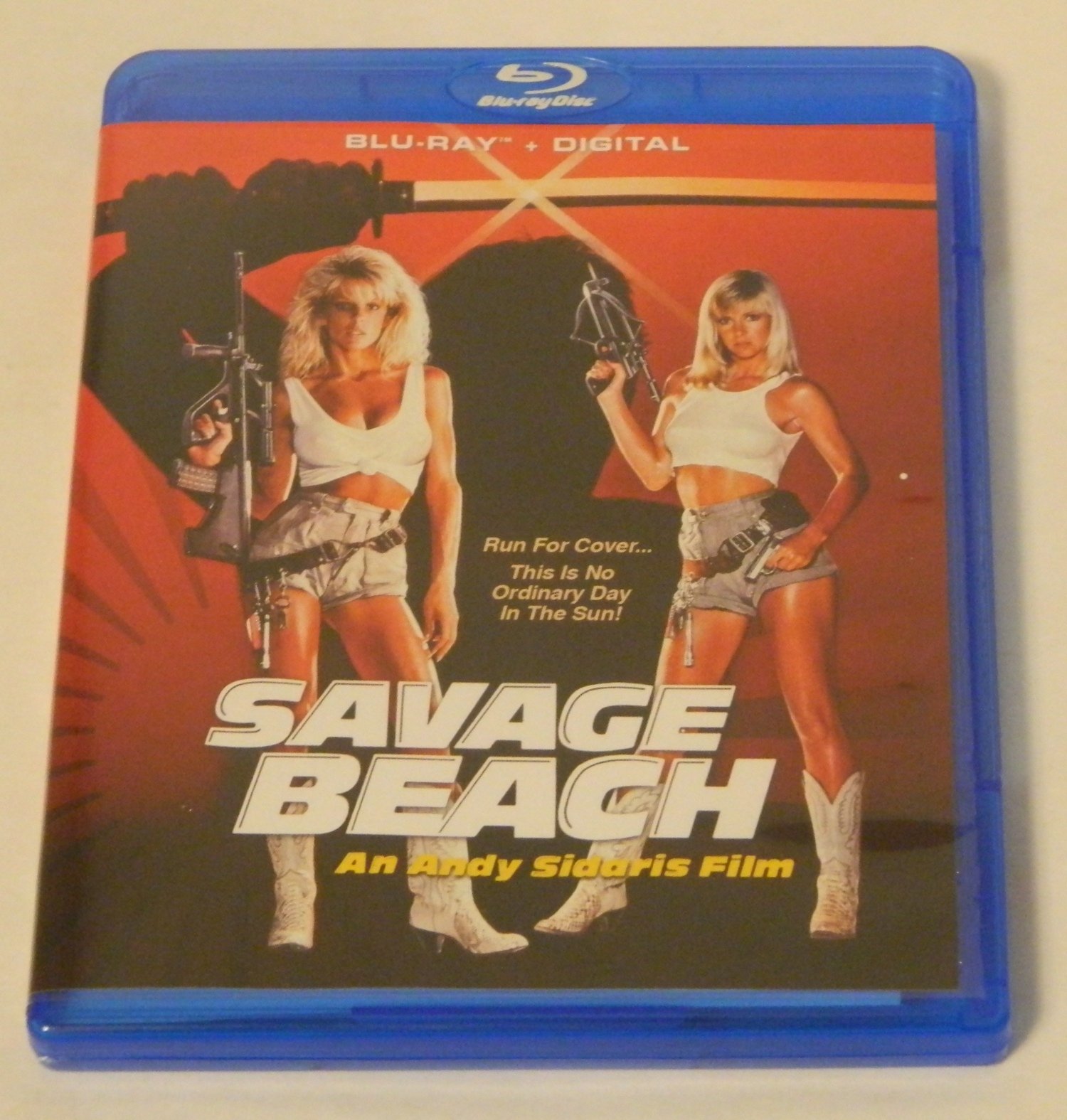 So far in my journey through Andy Sidaris’ filmography, I have been incredibly entertained by all three of his first films in the “Triple B” series. They range from a B-movie classic (Hard Ticket to Hawaii) and a film that is just shy of being one (Picasso Trigger) to the very cheesy but slightly flawed Malibu Express. At this point, I was starting to believe that I would love every single film Sidaris ever made (in a B-movie kind of way) even though all filmmakers have at least one flawed film on their resume. The streak finally came to an end with Savage Beach, a tolerable B-movie but one that is surprisingly hard to riff on. To be honest, it doesn’t even really feel like a Sidaris film. There’s very few crazy action scenes, no ridiculous weaponry, and outside of a few hilarious moments there just aren’t as many B-movie antics as I’ve come to expect from Andy Sidaris films. It’s surprisingly too serious, as if Sidaris suddenly wanted to stop making schlocky films and actually tried to make a serious film (except with his usual scenes of gratuitous nudity thrown in). It’s easily the worst film so far in the “Triple B” series but considering I gave all of its predecessors at least a 3.5/5, that isn’t necessarily a death sentence. Even a below average Sidaris film like this is still more entertaining than most B-movies out there.

Note: This review and the rating Savage Beach was given are based on it being a B-movie and not what it would deserve if it was being reviewed as a “serious” film. If you aren’t into B-movies, you can safely skip this film as it is a pretty bad movie that is only worth watching because it’s so bad it’s good. If Savage Beach was being reviewed for its quality (not its unintentional hilarity), it would have received a 2/5 at best. For B-movie fans though, it is worth a slightly higher rating of a 2.5/5.

I will give Sidaris credit for trying something new with Savage Beach. Instead of his typical action flicks, this one is actually more of an adventure film set on a deserted island. Donna and Taryn (in her final Sidaris movie) from the last two films return but this has little in common with either of those films. This time, the two make a delivery to a remote hospital but get caught in a bad storm which eventually causes them to make an emergency landing on an island far from home. Stranded in uncharted waters with no hope of contacting a rescue team, they make their home on the island until a team of evil treasure hunters arrive to hunt for a long-lost trove of gold (that was stolen from the Philippines by the Japanese during World War II). There’s also a mysterious man on the island, who may have a connection to Taryn.

Outside of the large quantity of boobs, if I didn’t know otherwise I would never peg Savage Beach as an Andy Sidaris film. His films are usually full of action sequences, strange and completely unpractical weapons, and plenty of riffable moments. There’s very little of any of those things in this film. It isn’t even an action film at its heart, it’s more of an adventure film. Sidaris also likes to connect his films via many recurring gags, characters, and other things. There is another Abilene in this film, but he’s barely in the movie and doesn’t have a chance to show off his almost certainly horrible shooting accuracy. While he doesn’t really do anything, the inclusion of another Abilene does lead to one of the best quotes of the film though. “Another Abilene? They just keep coming, don’t they?” Even the Malibu Express doesn’t make its customary appearance in Savage Beach. The thinking jacuzzi does though, with some very good looking new additions to look at if you’re into that kind of thing.

I could usually write several paragraphs about all of the B-movie antics I enjoyed in these Andy Sidaris films (if I didn’t want to spoil all the good stuff that is). With Savage Beach I had a lot less material to laugh at. There’s only one really hilarious scene to make fun of, the helicopter storm sequence. Half the time, you can tell the scene was shot on a relatively sunny day with obviously fake rain coming down on Donna and Taryn. It does eventually look like an actual storm but these are probably the funniest scenes in the film. Otherwise, there’s only a few small things to poke fun at like the totally legit U.S. Army car (with just a decal on its front door), Donna and Taryn applying face paint to blend in on the island while having blindingly white shirts on (and it wears off almost immediately), and the very fake looking gold on the island. There just isn’t the large amount of mockable material that the first three films in the “Triple B” series had to offer or any of the fun action sequences Sidaris usually supplies. Those are the two things I look for in Sidaris films and Savage Beach is pretty lacking in both.

Savage Beach also makes a return to the random and mostly pointless nudity of Malibu Express (this was much more subdued in Hard Ticket to Hawaii and Picasso Trigger), but in this case considering how dull the story is and the lack of action, it might actually be a good thing. There’s especially way more pointless sex scenes in this film, mostly between the villain and his girlfriend. In this case, it’s very reminiscent of the first film in the Triple B series. There’s also a brief topless helicopter scene (at least it had been raining so it makes a little sense), two new characters who do little else but get naked (though most of the other minor characters from the previous films fail to make an appearance in this one), and even some slight male nudity for once. It feels like Sidaris knew this movie was going to be far less action-packed and much more dull, so he knew he had to throw in more nudity to keep people interested.

Outside of his hilarious B-movie antics and action scenes, one of Andy Sidaris’ best skills is his cinematography. Even though his films are campy and pretty terrible unless you enjoy B-movies, his cinematography is often quite impressive. While Savage Beach doesn’t have the variety of great scenery to look at (it takes place almost completely on a deserted island), it does still have some nice shots that look very solid on the upgrade to Blu-ray. It might even have some of his best shots yet (like the sunset scene). Video quality wise, Savage Beach is on par with the rest of Mill Creek’s Andy Sidaris Blu-ray releases. The film doesn’t look perfect on Blu-ray but the video quality is certainly an upgrade over the DVD release. Like every other release in this series, the extras include an introduction by Sidaris, an audio commentary, a lengthy behind the scenes featurette, and trailers. Savage Beach also comes with a digital code for Mill Creek’s new movieSPREE streaming service.

Based on the opening shot, I thought for sure that Savage Beach was going to be Sidaris’ attempt at a Karate Kid knockoff (similar to how Picasso Trigger was obviously heavily inspired by Bond films). I wish that was the case, it would have been a lot more fun. Instead, we get a mostly dull deserted island film where our two agents are off on a delivery quest for almost the entire movie and just happen to have trouble come to them. I’m guessing Sidaris was trying to make a more serious film than usual but while he is good at mixing in some great cinematography (again that’s one of the best parts of the movie), he just isn’t a good enough filmmaker to make serious films. Savage Beach is without a doubt the weakest of the first four films in the “Triple B” series, though its still good enough to warrant a 2.5/5. It has its moments but I’m not sure if I would recommend it for most B-movie fans. It’s a really close call. Hardcore Sidaris fans and those who really, really like B-movies should probably still watch it (especially if you enjoy gratuitous nudity). Those who only want to watch the best of the best B-movies should probably skip it.

Savage Beach and Picasso Trigger were released on Blu-ray on July 9, 2019.