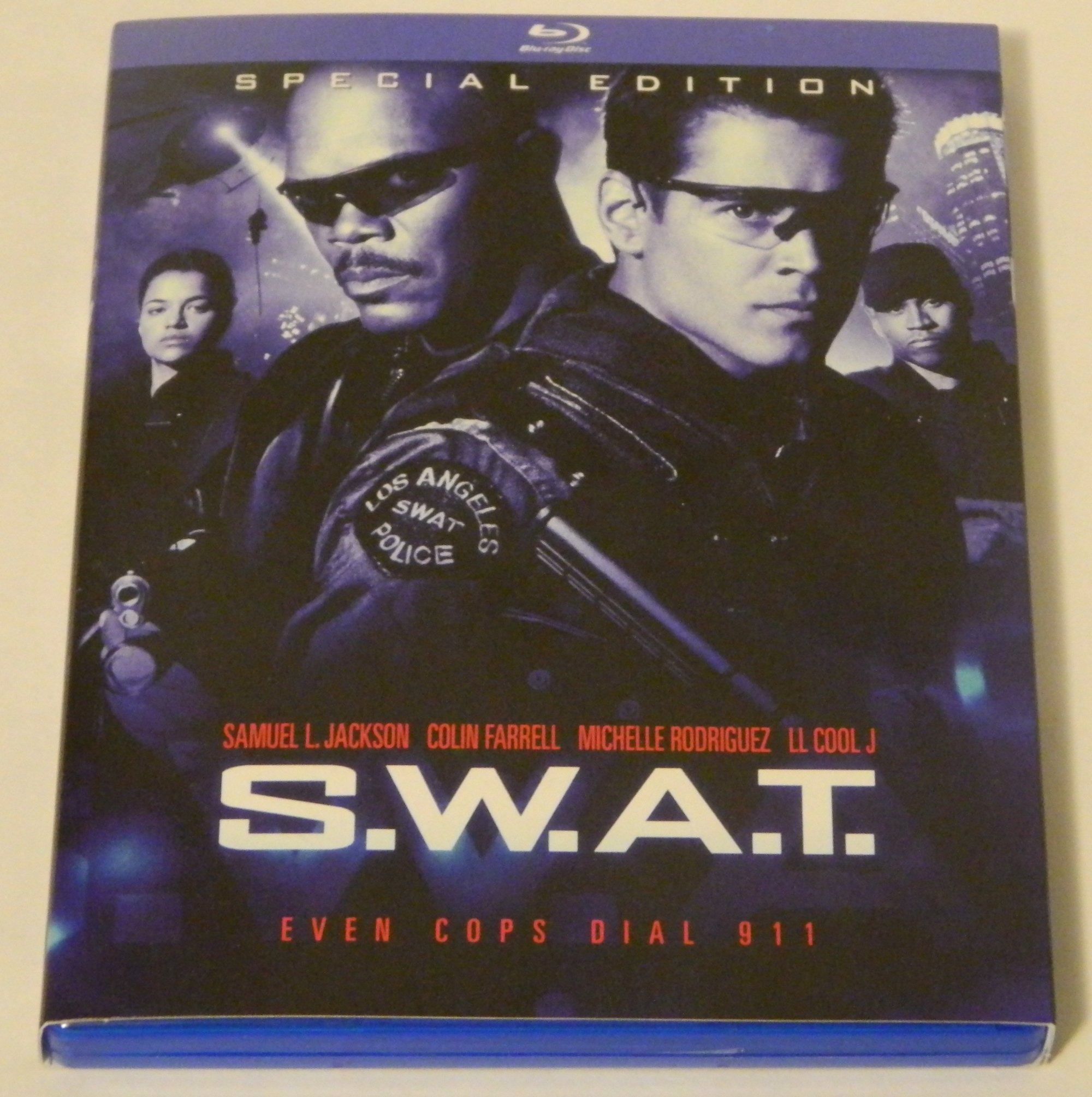 Before watching S.W.A.T., I predicted that it would be a middle-of-the-road action/crime film that I would give a perfectly average 3/5 rating. After watching the film, my prediction turned out to be completely accurate and I did ultimately give it a 3/5. In my book, a three out of five means I enjoyed watching the film, but it just didn’t really impress me in any way. S.W.A.T. is pretty much the definition of average but fans of the film’s genres should still enjoy it. I definitely wouldn’t call it a must-watch (even for fans of action or crime films) but if you are looking for something new to watch, you could do a lot worse than S.W.A.T.

S.W.A.T. is a 2003 film based loosely on the 1975-76 TV series of the same name (which also comes out on DVD the same day as this). The film has an all-star cast, many of whom were in the early days of their careers when they shot this film. Samuel L. Jackson, Colin Farrell, Michelle Rodriguez, LL Cool J, and Jeremy Renner are among the big names in this cast. Like the show, S.W.A.T. features Daniel “Hondo” Harrelson (Jackson) as he forms a new S.W.A.T. platoon to help tackle the biggest crimes in Los Angeles. The film features the newly formed team as they train and ultimately, as they take on their first major job of transferring a drug lord into federal custody. Making this task a lot harder, the drug lord tells news cameras that he is offering $100 million to anyone who can get him out of custody.

All in all, S.W.A.T. is about as average as it gets. The story is pretty much by-the-book, though the idea of a criminal offering a huge amount of cash to get gangs and other seedy individuals to try to help him escape is pretty inspired (though I highly doubt law enforcement would allow the news to air a comment like that). However, most of the “surprises” are so obvious that you can see them coming a mile away. S.W.A.T. also tries its best to add some humor to the story but other than one really funny moment (“It’s the damn robot aliens”), most of the attempts fail.

The best parts of the film are the action scenes and the acting. The acting shouldn’t be surprising considering how many of these actors are now household names. The action scenes are great but I don’t think there were quite enough of them for a film with an almost two hour run time. There are pretty much only three big action scenes in the film including only one in the first half of the film (the opening bank heist). The first half could have really used another smaller action scene since it does drag a little early on. Too much time is spent on training and getting to know the characters. The second half is much better but I thought the final action scene was pretty mediocre (probably the weakest of the three major action scenes).

S.W.A.T. has been released on Blu-ray a few times. It was originally released a few months after Blu-ray technology was launched. It was also released in a double feature release with Basic in 2014. Mill Creek Entertainment likely decided to re-release it on Blu-ray to go with their S.W.A.T.: The Complete Series DVD release, which streets the same day as this release. The Blu-ray video quality looks very nice, even though this film is almost 15 years old at this point. It especially looks good for an action film, a genre not always known for pretty visuals. There are some really good shots in the film, which look gorgeous and the video quality really shines in the action scenes. While I don’t own the original Blu-ray version of the film and can’t compare it, I would guess that since it was originally released back when Blu-ray was in its infancy, this release probably looks significantly better. This release of S.W.A.T. also includes two new full-length audio commentaries; one with the director and cast and other other with the screenwriters and technical consultant.

If you want the definition of an average action-crime drama film, S.W.A.T. is pretty much it. For everything that the film does well, there is another thing that is a bit lacking. The action scenes are pretty good but there aren’t enough of them and the movie drags early on. The acting is great but the story and attempts at humor are mediocre. The video quality on the Blu-ray is great however, so if you already know you like the film and are considering upgrading, I would probably say it is worth doing so. Otherwise, S.W.A.T. is mainly just for action/crime film fans who want something new to watch. Still, even though I think the film is about as average as they get, I do think it is worth a watch as long as you are into the genres.