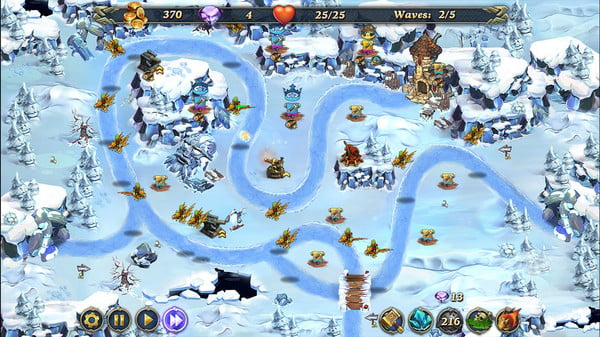 A couple weeks ago I looked at the tower defense game, Fort Defense. Fort Defense just so happens to be the sequel to the game I am looking at today, Royal Defense.

For those of you not familiar with the tower defense genre, here is a quick overview. In tower defense games the object is to stop waves of enemies from reaching your castle, fort, stronghold, etc. In order to stop these enemies you need to build towers to attack them. Players need to strategically place different types of towers in order to try and stop all or most of the enemies.

Royal Defense has four basic types of towers with upgraded towers for each type. The game includes the typical arrow, cannon, mortar/splash, and the money tower. If you read my review of Fort Defense this will sound very familiar since it is exactly the same in Fort Defense. The majority of the towers that you are going to build are going to be arrow and/or cannon towers.

Just like Fort Defense you kind of need to decide whether you are going to focus on arrow or cannon towers. You should focus on one or the other so you are able to focus your upgrades on that type of tower. In Fort Defense I went mostly with cannon towers since they have a longer range and do more damage. In Royal Defense I decided to switch things up and focus on arrow towers. This was due to the frustration in Fort Defense where you couldn’t kill air units in early waves if you focused on cannon towers. I would say that the arrow towers are the right choice in Royal Defense since they do well against the air and ground units.

I didn’t have much use for the other two types of towers. I actually don’t think I built any mortar/splash towers outside the tutorial levels that explained them. I didn’t get much use out of them since most levels don’t have large groupings of enemies and for the few that do I didn’t feel like wasting upgrade gems to upgrade the mortar towers when I rarely used them.

I was actually surprised how little I used the money towers. In Fort Defense I used quite a few money towers since they were quite helpful. The money towers would be helpful in Royal Defense as well except that there is a lack of open spaces to build towers in Royal Defense. Since there are so few spaces, those spaces need to be filled with towers that actually do damage. Before world three I don’t think I built a single money tower.

One of the biggest problems I had with Fort Defense was the unbalanced feel to the levels. Unfortunately that problem is even worse in Royal Defense.

What do I mean by unbalanced levels? Let me take you through a level of Royal Defense to explain. To begin each level you don’t start with a lot of money. This means that in most levels you start with just enough money to build enough towers to kill all of the enemies in the first wave. This is pretty fair since the game wouldn’t be very challenging if you could build enough towers right away to easily kill all of the enemies.

The balance issues usually come around the third or fourth wave of each level. At this point in the level you have acquired quite a bit of money. Since each level only has a few places to build a tower, you will quickly run out of areas where you can actually spend all of your money. You will use the money to fill in all of the empty spaces with towers and you will also upgrade each tower to its’ highest level. Around the third or fourth wave, the areas where you could use your money run out and you are left sitting there with a bunch of money and having nothing to use the money on.

This situation makes about half of each level pretty boring. Once you have built all of the possible towers, you pretty much have to just sit around waiting for your towers to kill the rest of the enemies. Not surprisingly this is not that fun.

Like its’ sequel Royal Defense relies pretty heavily on its’ special currency, gems. The idea behind the gems is a solid game mechanic that has been used by other tower defense games. I think it is a good idea rewarding players with the ability to purchase more upgrades based on how well they do in levels. Royal Defense is a little stingy with the gems though in my opinion.

The problem with the gems comes from the tower locations in every level that are locked unless you use some of your gems to unlock them. If there was one or maybe two locations per level that required using gems to unlock I wouldn’t have had a huge issue with it. In Royal Defense some levels have three or four locations that are locked. On top of it the locations that are locked are usually some of the most critical positions in the entire map. With this reliance on locked positions, the game presents you with two options. Either avoid using the key positions on the map or waste your precious gems to unlock a location that will only help you in one level. Since I wasn’t going to waste gems on unlocking locations, I had to play the game missing many important tower locations.

These locked positions just feel so pointless like they were added as an excuse for some micro-transanctions for the mobile versions of the game. I just don’t know why the game felt the need to lock them. If the game wanted to be more difficult it should have just eliminated these positions from the map entirely. Otherwise the game could have just kept all of the positions unlocked and given the player less gems in order to increase the difficulty.

First the tower is really expensive. In the later waves this isn’t a problem since you will be swimming in money. The problem is that the game likes to throw invisible enemies in the early waves where you can either not afford the tower or you have to spend almost all of your money just to be able to afford it. Usually you end up being forced to use your special abilities in the early waves to damage the invisible enemies so they can be spotted by your other towers.

The other problem comes from a lack of space. Each level just doesn’t have enough spaces to place towers on. Since the radar tower doesn’t attack enemies, this means that you have to waste spaces just to detect invisible enemies instead of using the spaces to build towers that actually damage enemies. Without unlocking the additional spaces, some of the levels only have a handful of locations to build on in the first place. This means that you will only be able to place a few towers that can actually attack the enemies.

Bang for the Buck

The amount of gameplay you can get out of Royal Defense will depend on how much effort you want to put into the game. The game includes 60 levels, which is actually 20 more than Fort Defense, but each level only takes a couple minutes to complete. If you just play through the game one time without trying to perfect every level, you can expect around five or so hours of gameplay. If you replay levels, try additional difficulty levels or try for all of the achievements, it may take you quite a bit longer. Royal Defense was just not engaging enough for me to continue playing the game after I beat all of the levels.

At the time of this post, Royal Defense’s retail price was $5.99 which is pretty high in my opinion. You get a decent amount of gameplay out of the game but Royal Defense is not special enough to stand out from the many other tower defense games. Plus Royal Defense appears to go on sale pretty regularly and has even been bundled before. I personally would recommend waiting until a sale if you were interested in the game.