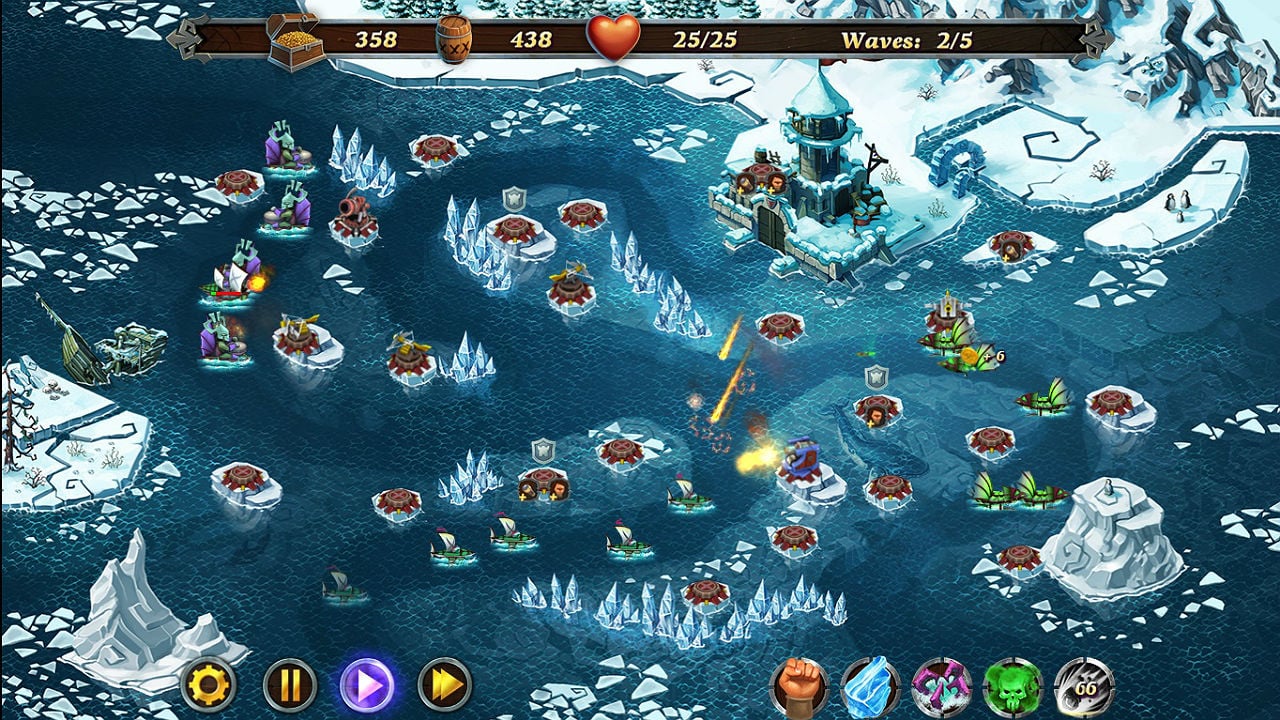 The tower defense genre is a semi-recent new genre of video games. While the first tower defense game was created in 1990 and there were quite a few maps for games like StarCraft and Warcraft that implemented the genre (Wikipedia), dedicated tower defense games didn’t start to become popular until the late 2000s.

For those unfamiliar with the genre, your object is to protect your castle/fort/stronghold against a horde of enemy invaders. In order to attack these enemies you need to build towers along a path in order to kill the enemies before they reach your base. This genre of games is somewhat of a acquired taste as some people are bored by tower defense games while others love them. I would consider myself a big fan of the genre. With that said, I found Fort Defense to be a very average tower defense game.

Fort Defense is of the more typical variety of tower defense games where you can only build towers on predetermined points around the map. Fort Defense comes with four different types of towers.There is an arrow tower (fast but weaker), cannon (stronger but slower), splash (has large area of attack and high damage but is slow), and the money/upgrade tower. Each type of tower can be upgraded two times which increases their range and power. Each tower can then be upgrade one additional time to one of two final forms that provide special benefits for the tower. Fort Defense is kind of lacking in variety in tower types which kind of hurts the game. In particular I think the game should have had a dedicated tower to slow down enemies instead of just giving that power to one of the upgraded forms of the arrow tower.

Fort Defense did a good job by giving the money tower additional abilities in its’ final form instead of just generating cash. Its’ final form can either teleport enemies back to the beginning of their path or it can be used to upgrade the power and range of all nearby towers. In video games I am generally a money hoarder who rarely ever spends his money. In tower defenses I don’t generally waste time and space with money towers though since they usually just waste space that could have been better used with a tower that could actually attack the enemies. Fort Defense did a good job making these towers more powerful by giving them these additional powers. In each level I typically build two money towers in order to give the bonuses to my other towers.

Outside the money tower the towers are pretty typical for a tower defense games. You have your quick but weak, strong but slow, and your splash but slow towers. Generally in tower defense games I like splash towers but I didn’t find them to be very valuable in Fort Defense. You pretty much need to decide between being a arrow or cannon player. You can build both in each level but you are best off using most of your upgrades on the tower that you prefer (more on this later). I chose to be a cannon player since they seem considerably more powerful than the arrow towers. The problem with choosing the cannon towers is that you can’t attack air until you upgrade them to a machine gun. This means that you are likely to let air units in early waves through to your fort. If you go with the arrow towers though I worry that they won’t be able to take out the stronger enemies in the game.

In addition to the towers you place on the board, the game also give you five “magical” powers. These magical powers include a boost to all of your towers for a short time, the ability to freeze enemies for a short time in a specific area, the ability to put out poison that will poison any enemy that moves through it for a short time, sending out a bunch of fireballs to attack an area for a short time, and finally to summon a creature that will cause damage to all of the enemies around the area selected. While some people will probably like the magic powers, I never really cared for them. They didn’t seem to last long enough or do enough damage. I also felt you needed to spend too much time micromanaging them. I generally only used the powers early in levels to help kill some enemies when I didn’t have enough towers to kill all of them.

Your use of barrels are very important since you can’t reset them. Once the barrels are spent they are gone forever. Each level only has a designated number of barrels so you can’t just go back and get more by replaying old levels (replaying a level may give you some extra barrels if you didn’t previously perfect the level). Your use of barrels is so important since it will have an impact on the later levels. I think the game should have given you the chose to reset your barrels since you either need to spread around your use of barrels or you need to commit to one strategy and you will then be unable to change it on a later level.

While I didn’t notice the option right away, I would highly recommend using barrels to upgrade the amount of money you get at the beginning of the level and how much you get for each enemy killed. This is quite important since when you reach the second world, the game doesn’t give you enough money at the start of the level. Due to this problem you will likely let several enemies through in the early waves of a level. You usually only get enough money to build one or two towers to start the level and that generally is not enough. Even after upgrading both several times there will be levels where you still don’t get enough cash to start the level.

This lack of money is a big problem with the game since if you chose to focus on cannon towers you are doomed against air units in the early waves. Since you spent a lot of your barrels on cannon towers, your arrow towers will be too weak to take out the air units so you are pretty much resigned to just letting the air units get through. Once you reach wave two or three you will have enough money to build a machine gun which will help you a lot against air units but you will have already lost several lives and have no way to prevent it.

Fort Defense has some serious balancing issues with regards to money. In the early waves you don’t have enough to build enough towers to kill all of the enemies. Once you hit wave three though you will be swimming in so much money that you can pretty much just buy anything you want. The typical level for me went like this. The first two waves I struggled to kill all of the enemies since I didn’t have enough money. Wave three then hit and the money was rolling in so quickly that I was constantly building and upgrading towers to their maximum level. Then for the final two waves I essentially just sat there waiting for all of the enemies to be killed. The game could have done a much better job distributing money to spread the challenge out throughout the entire level. The game ends up being hard at the beginning of the level but if you survive the first two waves you will coast to victory.

While the game does have some balancing issues especially with the barrels, I still had fun playing Fort Defense. I am a big fan of tower defenses though. The game is technically sound and I didn’t encounter any issues while playing the game. I also found the artwork to be pretty nice for a game that was originally a mobile game.

Fort Defense consists of 40 levels that you can play at an easy, medium and hard difficulty. The 40 levels consist of two different worlds (grass and ice). Each level generally consists of between five and ten waves of enemies with most levels being on a lower end of that range. The later waves of each level can have quite a few enemies to kill so the levels are longer than you would expect with only five to ten waves. The levels are still pretty short though which is not surprising since it was originally a mobile game. Having no desire to perfect all of the levels but having to replay some in order to get more barrels, Fort Defense took me around five hours to complete.

Overall Fort Defense is a very average tower defense game. I had fun playing the game and I encountered no technical issues while playing. Being a mobile port the game also looks pretty good. The game is far from original though. There are no new mechanics and there really isn’t any new twists to the format. If you have played a tower defense game before, you have essentially already played Fort Defense. Adding in some of the balancing issues, and I can’t really recommend the game to anyone that is not a fan of the tower defense genre since there are much better examples of the genre. If you do like tower defenses I think you should have some fun with the game. I would probably recommend that you wait for a sale on the game though since I don’t think it is worth $6.