Being in the age of texting it didn’t surprise me that there would eventually be a board game designed around abbreviating words/phrases. At this point I am guessing that there are several games made with this premise. Since I don’t really text this concept would generally not appeal to me. Add in that most of these games are probably cheap cash ins trying to make a quick buck. With all of this going against it, I usually wouldn’t have even given ROFL! a second glance except that I saw that the game was published by Cryptozoic Entertainment and was created by John Kovalic. For those of you not familiar with John Kovalic he is more known as a board game artist having done the art for most Steve Jackson Games (including most if not all of the Munchkin games) but was also one of the co-founders  and artists of Out of the Box Publishing. With these two factors making me believe ROFL! was more than a cheap cash in I gave the game a chance. While ROFL! is not perfect, I was pleasantly surprised.

How to Play ROFL!

Place the gameboard in the middle of the table. Each player takes a playing piece and answer board of the same color along with a marker. Choose which player will be the first guesser. The rest of the players will be writers in the first round.

The round begins with the guesser taking a card from and showing one of the sides to the other players without looking at it themselves. The writers read off the category to the guesser but the guesser receives no other information. The guesser flips over the timer and the writers have until the timer runs out to come up with their clue for the guesser.

Each writers need to try and create a clue for the guesser that will get them to guess the phrase on the card using the least number of characters (any character on a keyboard can be used) as possible. Writers can choose to abbreviate the phrase by cutting out letters or can create any clue that will get the guesser to guess the phrase. When a player has finished their clue they count up the characters used (spaces do not count as characters). Players then put their token on any number equal to or higher than the number of characters they used. If a player used more characters than the number they put their token on, their clue cannot be shown to the guesser. Once a token is placed it cannot not be moved by any player. A player is unable to play a token on a space that already has a token on it. 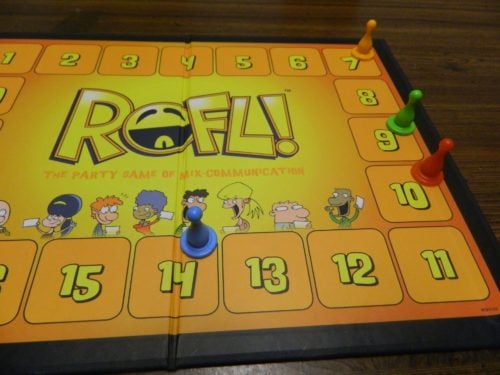 Once the timer runs out players can still place their token but cannot add anything to their answer board. The clues will then be presented to the guesser one at a time. The player whose token is on the smallest number will get to show their answer first, followed by the second lowest number and so on. Before each clue is shown the timer is flipped over. Once a clue has been shown, the guesser has until the timer runs out to make their guess. The guesser is only able to make one guess per clue given. 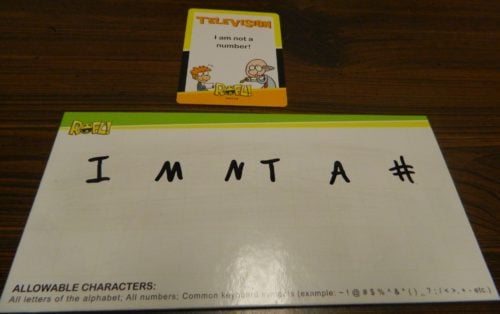 The green player has chosen to break down the phrase “I am not a number!” into six characters.

A new round begins with the player to the left of the current guesser becoming the next guesser.

The game ends after each player has been the guesser three times. Players count up their points. The player with the most points wins the game. 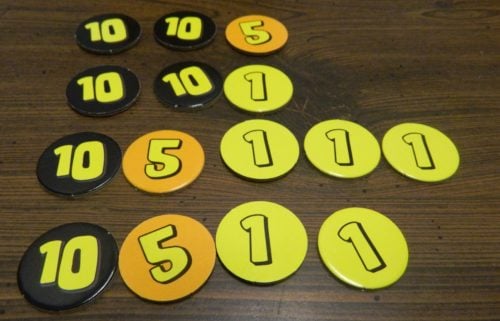 The top player has won the game with a score of 25 points.

If there is a tie, all tied players become writers while all of the other players are guessers. Another round is played with each writer creating a clue. The clues are revealed with the player using the least number of characters getting to show their clue first. Each guesser is allowed one guess per clue. The first player to give a clue that gets one of the guessers to say the phrase wins the game.

My Thoughts on ROFL!

When I first saw ROFL! it basically looked like texting the board game. Not being a texting person I was a little worried that the game wouldn’t really appeal to me. While I can see people who text a lot having an advantage in the game, if you don’t text often (like me) you can still really enjoy the game. ROFL! succeeds because it takes the abbreviation mechanic and makes a fun party game out of it. ROFL! feels like your typical party game but also feels unique at the same time.

Like most party games, ROFL! is quick to pick up and play. It takes minutes to explain to new players. The game is accessible and can be enjoyed by people that generally don’t play board games. Being a party game the length is easily adjusted. If you you want a longer game, just have each player being the guesser more times. Want a shorter game, let each player be the guesser two times instead of three times.

While I was at first skeptical of the abbreviating mechanic, it is considerably more fun than I was expecting. It is kind of hard to explain why but it is just a fun mechanic. It kind of plays like a word game and yet feels like a unique experience at the same time. Basically you have to figure out how much you can cut down the phrase and still make it readable to the guesser. The mechanic is simple and yet satisfying. It is not something that I would play for hours at a time but the mechanic is fun for a game or two at a time. While it is not the best party game I have ever played I would say that it is better than most.

While the game is fun, I wouldn’t say that there is a ton of strategy in the game. Mostly you are trying to find the best way to eliminate as many letters as possible while making the phrase still easy enough for the guesser to figure out. Most of the strategy in the game comes down to how you want to approach a given round. The obvious benefit to using the least amount of letters is that your clue is shown first and you score more points if the player guesses the phrase. The problem though is that while you will sometimes be able to make a successful clue using the least number of characters, it might be more strategic to let someone else use the least characters.

The benefit of showing your clue after another player is that the more clues that are shown the easier that it will be for the player to guess the correct phrase. This works because different players will emphasize different parts of the phrase. A player is usually able to get some of the phrase from the first clue but they might not be able to get the whole thing since too many characters were dropped by the clue giver. The other players will then get the benefit of this if they focused on a different portion of the phrase since they will be able to piggyback on the information gained from the first clue. In my experience the second clue giver is generally in the best position since they get the benefit of the first clue and yet will score more points than all of the other players if they are right. This shows that there is a bigger risk/reward element to the game than I initially thought. You can try for the first clue which gives you more points and allows you to show your clue first. The first clue puts you in a riskier position though and you could end up helping the other players. On the other hand you can take one of the later positions and get the benefit of the other player’s clues but might not be able to show you clue at all.

In my experience one of the players will guess the phrase based on one of the clues. I can’t remember a single round of the game where the guesser was unable to come up with the phrase after all of the clues were given. This is not particularly surprising since a player could literally spell out the whole phrase in some rounds. I like that most rounds will end with the phrase being guessed since a round where no one scores is pretty boring. This does lead to the game being kind of on the easy side though. I think I would have enjoyed the game a little more if it was a little more difficult guessing the phrase. This is especially true since some of the best moments in the game come when the guesser has no idea what the clue givers are trying to get them to say.

One small problem I have with the game is with some of the phrases included in the game. The length and complexity of the phrases can vary pretty significantly. Some phrases are quite short and you can get down to just a couple characters while others you would be lucky to get under 20 characters. I think the game’s sweet spot are the phrases that are in the middle. The really short phrases are too easy making it hard for the first clue not to win the round. The really long phrases don’t work that well since the players who create the longer clues can benefit a lot from the clues given out before them.

Overall the components are very solid and are what you would expect out of this type of party game. I always like when these type of games include dry erase boards instead of gamesheets since you don’t have to worry about running out of sheets. The game’s artwork is what you would expect out of a John Kovalic game. The game’s 170 cards are enough since they allow you to play 340 rounds of the game without a repeat. If you ever run out of cards you could also easily make your own cards with any famous phrase. My only somewhat nitpicky complaint with the components is the inclusion of a sand timer over a mechanical or electronic timer. I felt that it was kind of a pain waiting for all of the sand to fall to one of the sides when a player guesses incorrectly and you need the timer for the next clue. This could be remedied pretty easily though by just using your own timer.

Should You Buy ROFL!?

I will say that ROFL! surprised me. While it is not perfect ROFL! is a surprisingly fun party game. The game doesn’t have a lot of strategy but there are decisions to make regarding how many letters you want to use. It is fun and challenging trying to figure out how to abbreviate a phrase where another player can still understand it. ROFL! is a game that is fun in shorter doses though since I don’t really see playing more than a game or two at a time without the game becoming a little repetitive.

If you don’t generally like party games or aren’t interested in ROFL!’s main mechanic, it probably won’t be for you. If you like party games though and like the abbreviating mechanic, I think you will be surprised by how much enjoyment you can get out of ROFL!

If you would like to purchase ROFL! you can find it online: Amazon