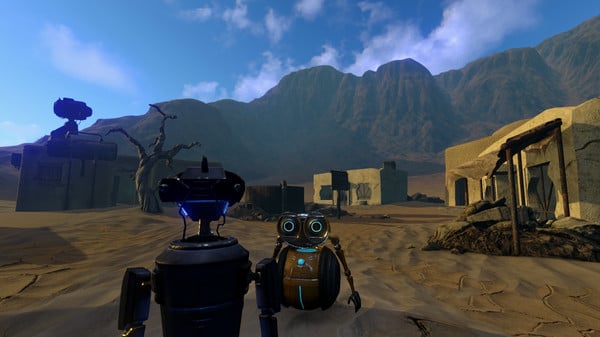 When I first saw Phoning Home the first thing that came to my mind (and probably a lot of other people’s) was the movie WALL-E. You have to look no further than the main character which looks suspiciously similar to WALL-E. Being a big fan of WALL-E I was excited to try out Phoning Home. After playing Phoning Home it does share some things in common with WALL-E (mostly the story of two robots working together towards a common goal) but there are also a lot of differences between Phoning Home and WALL-E. Phoning Home does a lot of great things, but one issue keeps the game from being as good as it could have been.

The story of Phoning Home follows the tale of ION and his ship’s A.I. The pair are part of a group of explorers that were sent out on exploration missions in order to find much needed resources. Things go awry when the ship crash lands on a strange planet. Without a way to call for help ION must explore the planet to find a way to contact their home to call for help. In his journey ION runs into another robot named ANI who joins him on his journey as they try to uncover the mysteries of the planet and try to find a way to escape.

While I haven’t finished the game yet, I have to say that one of Phoning Home’s greatest strengths is the game’s story/atmosphere. While I am probably only through about half of the story, I have found the story to be quite interesting. While the game’s tone is quite a bit different than WALL-E it feels similar at the same time. The story mostly focuses on ION and ANI working together to survive while also uncovering the secrets of the planet that they have crashed on. The game’s characters are interesting and the voice acting is surprisingly good for an indie game. I want to know how the game is going to end which is always a good sign for a game’s story.

Speaking about the game’s atmosphere, I give the game a lot of credit for the graphics/visuals. While the game might not reach the graphical level of a AAA studio, for an indie game the game’s visuals are really impressive to the point where you might think it was made by a AAA studio. While I had to play the game at lesser graphical settings (due to not having the most powerful PC) you can tell that care was put into crafting the game’s world. There is quite a bit of detail in the environment and the weather and time of day effects are really good. I don’t know if there is much more you can ask for with regards to graphics/visuals from an indie publisher.

If I had to classify Phoning Home’s gameplay I would probably say that it is a single player story-driven crafting/survival game. That is quite a mouthful but an accurate description of what you will do in Phoning Home. The main mechanic in Phoning Home is probably the exploration mechanic. You will mostly be traversing the planet in order to reach your next objective. You will encounter obstacles and enemies that you will have to deal with. Regarding combat you can either try to avoid enemies or attack them directly. Eventually ANI will join you and you will need to protect her from the environment and enemies. This part of Phoning Homes feels like your basic exploration/adventure game.

The one unique idea in the game is adding a crafting/survival mechanic into a story driven game. Basically for the crafting mechanic you need to pick up resources you encounter in your journey to craft different items that you will need to progress. Some objects like fuel, power, and health need to keep being made while other items only have to be crafted once in order to give your character a weapon, stronger defenses or other abilities that they otherwise wouldn’t have access to. This might sound like every other crafting game but what is unique is that this system is used to support the story/exploration. Your resource gathering serves a purpose for the story instead of you just acquiring resources to build a base (there is no base building in the game as far as I am aware). While there are other games that have incorporated crafting into a story driven game, Phoning Home does a really good job making it work with the game’s story focused on being stuck on a strange planet and trying to survive.

As a whole Phoning Home’s mechanics work pretty well. The exploration and crafting mechanics actually work well to support one another. The game does a good job making it feel like you need to scavenge resources from the world in order to survive. People who like crafting games but are looking for more of a structured gameplay experience will probably really enjoy this aspect of Phoning Home. Instead of having to come up with your own things to do to pass the time in the game, Phoning Home does a good job using the crafting mechanics to create a story of exploration and survival.

There are so many things that I love about Phoning Home that it really hurts that one thing prevents Phoning Home from being as good as it could have been. With Phoning Home being a crafting game, materials are critical in the game. Resources can be really scarce at times in the game so you need to be really frugal when you decide to use them. Unless there was something wrong with my save file (I was playing a pre-release version of the game), resources don’t seem to regenerate at all or they regenerate really slowly to the point where you can’t rely on them regenerating at all. This causes problems for the game.

I can see where the developers were going with the limited resources since it plays into the game’s story of being trapped on a strange planet hoping to survive as you explore. In reality it creates issues. I am extremely frugal when it comes to using items in games and yet I ran into several situations where I ran out of materials that I needed. While exploring I picked up every resource that I could but the game limits how much of a material that you can hold at any given time. Therefore you will run into resources that you can’t pick up because you already have too many of them. Later in the game you will run into a situations where you need a resource that you had to pass up previously. This forces you to backtrack to that location in order to pick up the needed material. I have never been a fan of backtracking and at times this really felt like needless backtracking. Phoning Home could have benefited from having more of the resources available or allowed them to regenerate after a given amount of time. If you don’t mind backtracking this won’t be a big issue for you but if you don’t like backtracking it could drive you nuts.

Another issue I had with Phoning Home is that while the game has controller support, it doesn’t work well. The problem with the controller support is that the right stick (controls the camera) moves so slowly that it feels like the camera is stuck in slow motion. I am guessing that this issue has either already been fixed or will be fixed soon since I was playing a pre-release version of the game. The last time I played the game though it was basically unplayable with a controller. Phoning Home plays fine with a keyboard and mouse but I hope to eventually be able to play the game with a game controller since I generally prefer playing these type of games with a controller.

For every indie game review I try to finish the game in order to give a clear picture of how long a game is. In the case of Phoning Home though I am unable to do that because I am currently stuck in the game. I don’t know if I am just not approaching the situation correctly or if there is a bug but I can’t figure out how to progress past my current point in the game. Since I haven’t been able to finish the game I can’t make an estimate of how long the game is. The developers claim that the game is around 8-25 hours long. My educated guess would be that the game is around 10-15 hours long.

Overall I liked a lot of things about Phoning Home. The game is fun to play and the crafting mechanics work surprisingly well with the exploration mechanics. The game’s story and visuals are quite good for an indie developer. The problem with the game though is that there is unnecessary backtracking to pick up resources you need to progress in the game. Even with careful use of your resources you likely will have to backtrack to previous locations to just pick up needed resources.