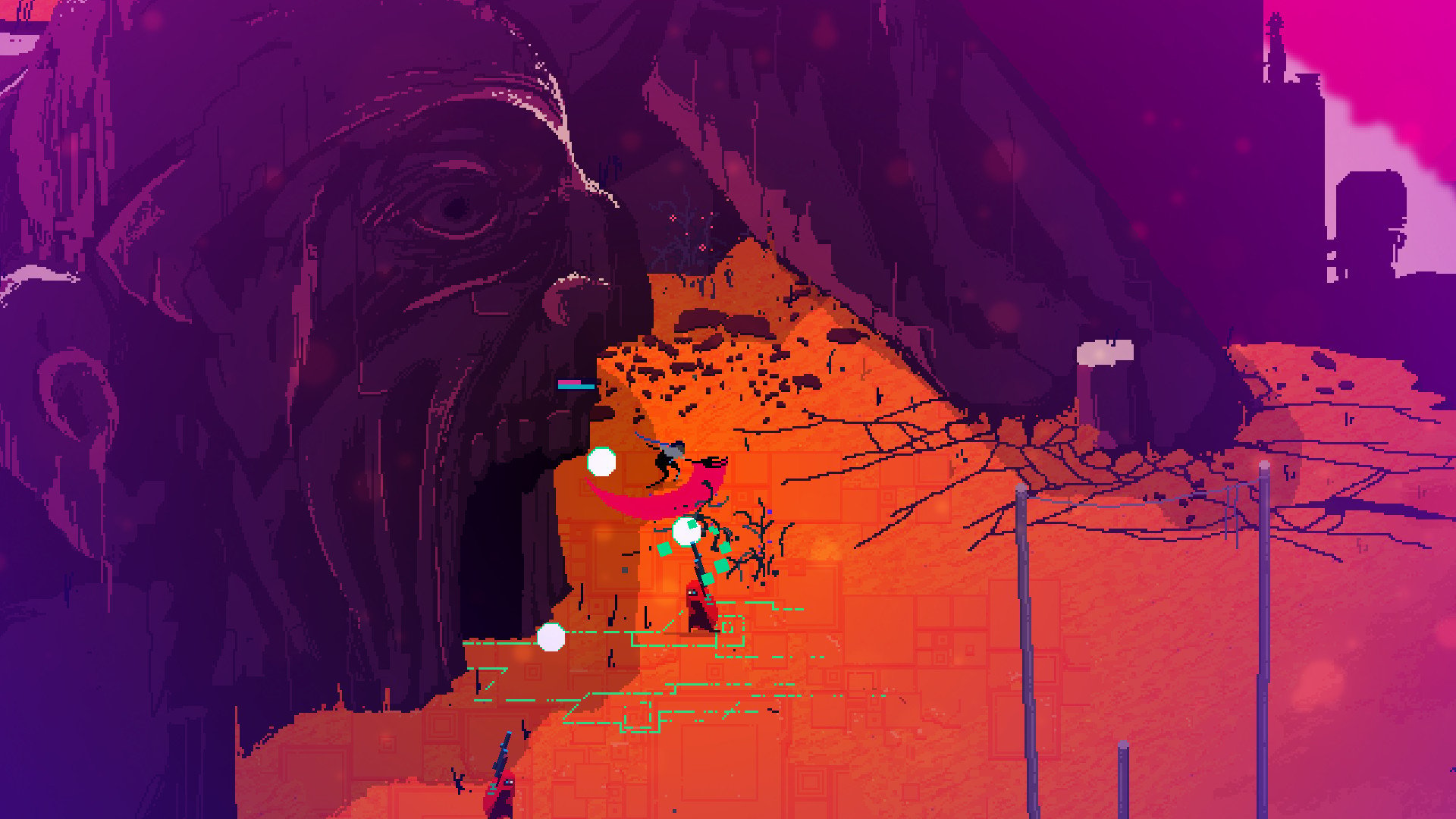 For fans of the 2016 hit Hyper Light Drifter the game I am looking at in this review may look quite familiar. While I have never played Hyper Light Drifter, one quick glance will tell you that Resolutiion looks very similar to the aforementioned game. Between the graphical style and the gameplay it is pretty obvious that Resolutiion took inspiration from Hyper Light Drifter. This will likely attract the attention of fans of the aforementioned game, but what intrigued me about Resolutiion was the game’s style. From the trailer alone I could tell that the game utilized a really unique style and I was hoping that this would translate into a fun and engaging action adventure. Resolutiion is a game oozing with style and satisfying gameplay that is unfortunately let down by a lack of direction.

In Resolutiion you play as a mysterious warrior. You wake up in a strange world with no memories of your past. The world faces a dire threat and you are the only one able to stop it. You are joined by an AI that is supposed to help you track down this threat and stop it for good. To help you though the AI needs you to relive memories from your and the world’s past in order to gather the information needed to put an end to the threat. Things may not be exactly as they seem though as the world is troubled by mysterious forces. Can you get down to the truth and stop the threat that endangers the whole world?

At its core I would probably classify Resolutiion as an action adventure game. You control the mysterious warrior as they explore the world trying to piece together what happened. Much of the gameplay revolves around combat. In many ways the combat is typical of the genre. You are given a sword/melee attack to attack enemies and obstacles that stand in your way. You also gain access to a number of special attacks and other abilities as you progress through the game. Most of these give you additional ways to damage enemies, but you also unlock a fast run that helps you dodge enemy attacks. These special abilities use energy which is restored over time. You need to use these different types of attacks to defeat the enemy units while also dodging their attacks. You have limited health in Resolutiion so you can’t take much damage before you die and respawn at the last checkpoint you activated.

While the combat is the game’s driving mechanic, the game also relies on exploring and some light puzzle solving. In a lot of ways Resolutiion kind of reminds me of a Metroidvania. In the game you are tasked with exploring quite a few different areas of an interconnected world. Most of the time you can explore freely, but you will occasionally reach areas that are blocked by an obstacle. To clear these obstacles you need to use the special abilities that you unlock throughout the game. This introduces a light puzzle mechanic as you have to use the tools available to you to open up a path to continue your journey.

In a lot of ways Resolutiion’s gameplay is basically what you would expect from your typical action adventure game. The game revolves around exploration and combat. You explore the world to find the path to your next location and you fight the enemies that get in your way. I wouldn’t say that Resolutiion’s gameplay is the most original. In fact in many ways it seems a lot like Hyper Light Drifter. Despite this I found it to be pretty enjoyable. On the surface the combat and exploration seem kind of simple. In practice though there is hidden depth to them as the game requires some real skill in order to make progress.

Case in point is the game’s combat. The game basically only gives you a basic melee attack, a special attack that you can swap in and out, and a dash/fast run. The game doesn’t have a bunch of different attacks to choose from or a blocking/parrying system. Yet the combat is quite fun. The controls are pretty precise and the game does a good job creating fast paced combat. Dodging enemy attacks is just as important as dealing damage as you have a limited amount of health. The combat involves a lot of dodging enemy attacks mixed with swapping between melee and special attacks. The combat doesn’t utilize a bunch of different mechanics and yet it still remains engaging. Fans of these type of games should really enjoy Resolutiion.

The thing that initially intrigued me about Resolutiion was the game’s overall design and atmosphere. Having never played Hyper Light Drifter I can’t directly compare them, but I can definitely see the similarities. Resolutiion utilizes a pixel art style. While elements of the world are quite dark, they show a real sense of imagination as well. From the character designs to the backgrounds, you can tell that a lot of effort went into designing Resolutiion’s world. Instead of creating another generic sci-fi world, there was real creativity put into designing all of the different sections of the world. Each section of the world has it own unique style and all of these sections combine to create a world that you want to explore. Fans of Hyper Light Drifter or stylish action adventure games in general should love Resolutiion’s style.

I enjoyed playing Resolutiion, but the game has some issues that prevent it from being as good as it could have been. I would say that the biggest problem with Resolution is the fact that the game doesn’t give you a lot of direction. It basically gives you a general direction of where you need to go and then lets you figure it out on your own. This lead to times where I got lost as an obstacle blocked my path and I had no idea of how to proceed. I ended up wasting quite a bit of time just trying to figure out what I had to do next. This isn’t helped by the game’s map. You eventually start to figure out how to decipher it, but it is not the most intuitive thing. This leads to an experience that can be frustrating at times as you have no idea on how to proceed. People who just like to explore or don’t mind when games don’t give you a lot of direction probably won’t mind this. There are going to be a lot of people who like me find this to be frustrating though.

This lack of direction kind of makes its way into the story as well. As I mentioned before I really like Resolutiion’s overall atmosphere as it really creative. Unfortunately I didn’t really care all that much for the overall story. At times I found it a little hard to follow as it kind of forces you to figure it out on your own. I haven’t completed the entire game yet so the story could improve considerably as it shows potential. I am guessing this was done by design as the story will reveal itself more as you make progress. The story starts a little slow though where I started to have trouble really caring about what was going on.

In addition to not giving players a lot of direction, Resolutiion can also be quite difficult at times. I want to clarify this a little as the game is not always difficult. While exploring the world the game is only moderately difficult. As long as you pay attention to your surroundings and don’t make careless mistakes the normal enemies are not that hard to beat. You can take the combat slow and usually take them out without incurring much if any damage. The real challenge in the game comes from the bosses. The game features a lot of different bosses. Some of the bosses are not that difficult, while others can be really difficult. When you die it is usually your own fault as you didn’t do a good enough job avoiding the enemy attacks. Some of the bosses can feel a little cheap at times though. You don’t have a lot of health so you only can be hit by a boss a couple times before you die. The game being challenging is not necessarily a bad thing as there are many people that love a good challenge. Resolutiion will likely give these players enough challenge that they will be satisfied. The game can be a little frustrating for some players though as you will likely have to fight the same bosses over and over again until you succeed.

As for the length I can’t give you a definitive range as I have yet to beat the game. The developers claim the game takes 20 hours to beat. I can’t verify if this is true, but based on how far I have made it in the game I could see it being accurate unless the game ends abruptly. The game features quite a few different sections of the world to explore and most sections seem to take at least an hour or so to finish. When you add in the exploring and having to replay fights you lose, I think you can get plenty of time out of the game.

At first glance many people will probably compare Resolutiion to Hyper Light Drifter. The comparison seems fair as the game shares a similar style as well as gameplay mechanics. Basically you explore the world and try to defeat the enemies that stand in your way. The exploration mechanics kind of remind me of Metroidvania games as you explore an interconnected world which opens up as you unlock special abilities that remove obstacles that stand in your way. The combat is pretty typical of your traditional action game as you have a standard melee attack and a special attack. The gameplay in Resolutiion may not be the most original, but I found it to be quite satisfying. This is combined with a great atmosphere to create a world that you want to explore. The problem is that Resolutiion doesn’t give you a lot of direction as you basically have to find your own way through the game. While a majority of the game is pretty manageable, some of the boss fights can also be really difficult.

My recommendation for Resolutiion comes down to your feelings towards Hyper Light Drifter and other similar action adventure games. If you aren’t a big fan of the genre or prefer games that give you more direction, I don’t see Resolutiion being for you. People who love this genre though and don’t mind exploring until they find what they are supposed to do will likely enjoy their time with Resolutiion. For these people I would recommend picking up Resolutiion.