Here’s an odd question for you: It is illegal to pretend to be which of these in Alabama?

B. A college graduate

D. A native of Georgia

If you guessed a nun (A), you are correct. That’s the gist of Real Dumb Laws, a 2003 Pressman Toy trivia game that tasks you with figuring out the correct answer to some of America’s dumbest (but also funniest) laws.

To start Real Dumb Laws, each player or team takes a mover and places it on the corresponding color’s start space on the board. The first player or team to play is blue, followed by yellow, green, and red (it goes by the order on the board). The player to the left of the player or team whose turn it is does the reading. They take a question card from the stack and read the question and four possible answers out loud. The current player or team guesses one of the four answers and the reader tells them if they are correct or not (but if they guess incorrectly, they don’t read the right answer just yet).

If the player or team guesses correctly, they move up one space on the board. If not, any other player or team (except for the reader since they will know the answer) has the option of guessing an answer. If they guess correctly, they get to move up one space. However, if they are wrong they move back one space (or lose a turn if they are on the start space and can’t move back any further). If the original player or team is wrong, they do not get this punishment (they just don’t get to move up a space). The rules in Real Dumb Laws don’t say anything about whether multiple additional players or teams can make a guess but I would guess it is allowed (obviously the second player to guess would have pretty good odds to guess correctly since there will only be two possible answers left). 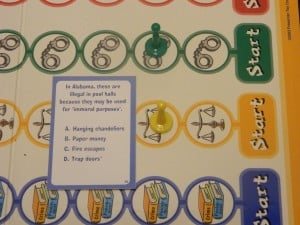 In this sample situation, green is being asked this question (one of the funniest ones I saw). If they correctly answer “trap doors” (D), they will move up one space. If not, they stay where they are and all other players (except for the reader) can give it a guess to try to move a space (if they are wrong, they move back a space).

Some cards have an additional “dumb law for the round” printed on them. You don’t have to play with these if you don’t want to but if you decide to play with them, the reader reads it before the question. Do whatever the dumb law tells you to do; most of them move players either back or forward. For example, one dumb law lets all players who have never done anything illegal move ahead one space. After you have resolved the dumb law, the reader then reads the question and the current player answers like normal.

Play continues in the order on the game board (and once all players or teams have taken a turn it goes back to the start of the order) until one player or team has reached the finish space. Not surprisingly, that player or team is the winner of Real Dumb Laws. 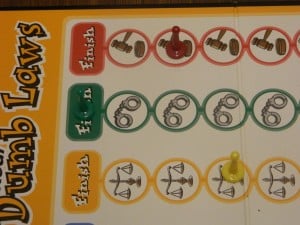 The green player has reached the finish line and has won Real Dumb Laws.

I’ve always been fascinated by dumb laws and often read the various websites devoted to them when I need to get a good laugh. While some of the famous dumb laws have actually been misconstrued to appear to be worse than they actually are (for example, a law trying to help preserve a rare cactus species is often stated as “Cutting down a cactus can get you a possible 25 years in prison,” which doesn’t sound as bad once you realize why it is in place) or are just completely untrue, I almost always laugh out loud at them. When we have an entire Congress full of idiots trying to ruin this country (outside of a very few exceptions), laughing at some of the dumb ideas people had in the past can make you feel a bit better about our situation today.

Most of the laws presented in Real Dumb Laws will make you laugh at loud. However, as a game Real Dumb Laws just doesn’t work. It’s basically a trivia game where you pretty much have to take random guesses each time (a pretty bad thing for a game genre that is supposed to test your knowledge). The game also has very few mechanics, you just answer questions, move your token when you get a question right, and occasionally try to steal a question when the original guesser is wrong. The only semi-unique mechanic is the addition of the “dumb law for the round.” These can at least add a little bit of spice to the game but most of them just have players move either back or forward a space and they aren’t particularly common in the first place. There are some that allow the reader to make up their own rule for the round, which could be fun but could also completely unbalance the game if you are playing with someone who is overly competitive (they could just say “everybody who isn’t me moves back to the starting space” since the rules don’t give any parameters). If the dumb law for the round was implemented better, it could have helped the game out quite a bit.

Since Real Dumb Laws is barely even a game, it is much more efficient to just visit the various dumb law websites and read them there. You could also buy the book the game is based on (You May Not Tie an Alligator to a Fire Hydrant: 101 Real Dumb Laws

), which I’m sure has most of the same laws included. The only fun part of the game is reading the questions and answers anyway. The game play is just plain boring.

Also hurting Real Dumb Laws is the pretty low amount of questions (just 250 which will probably only last you five to ten games) and lack of re-playability. Since a lot of the cards will be very memorable because of how funny they were (especially the ones that make you laugh out loud), you will probably remember most of them which makes it nearly impossible to re-play Real Dumb Laws. Another problem with the game is the overuse of certain cities and states. I realize that these cities and states were the easiest targets (since they clearly have less defined laws or way too many laws which make it easier to find funny ones) but I think there still could have been a little more variety. Also, instead of keeping the laws to only ones from the United States, I wish the game would have scoured the globe for some of the world’s funniest laws since I’m sure some other countries have even dumber ones than we do.

For Real Dumb Laws’ positives, the questions and answers are definitely very funny, the game can accompany two to four players or teams (of any size) so it has a lot of flexibility and can be played with any amount of players, and all players (except for the reader) have a possible chance to give an answer each turn (the game isn’t like Trivial Pursuit where only one player gets to play at a time).

Dumb laws are always funny to read and make fun of. However, the concept just doesn’t work as a game. When you can just read about the idiotic laws on the internet for free or in a book for a couple of dollars, there really is no need for it to be turned into a game. While I can recommend those websites (they are very funny), I definitely can’t recommend this game.