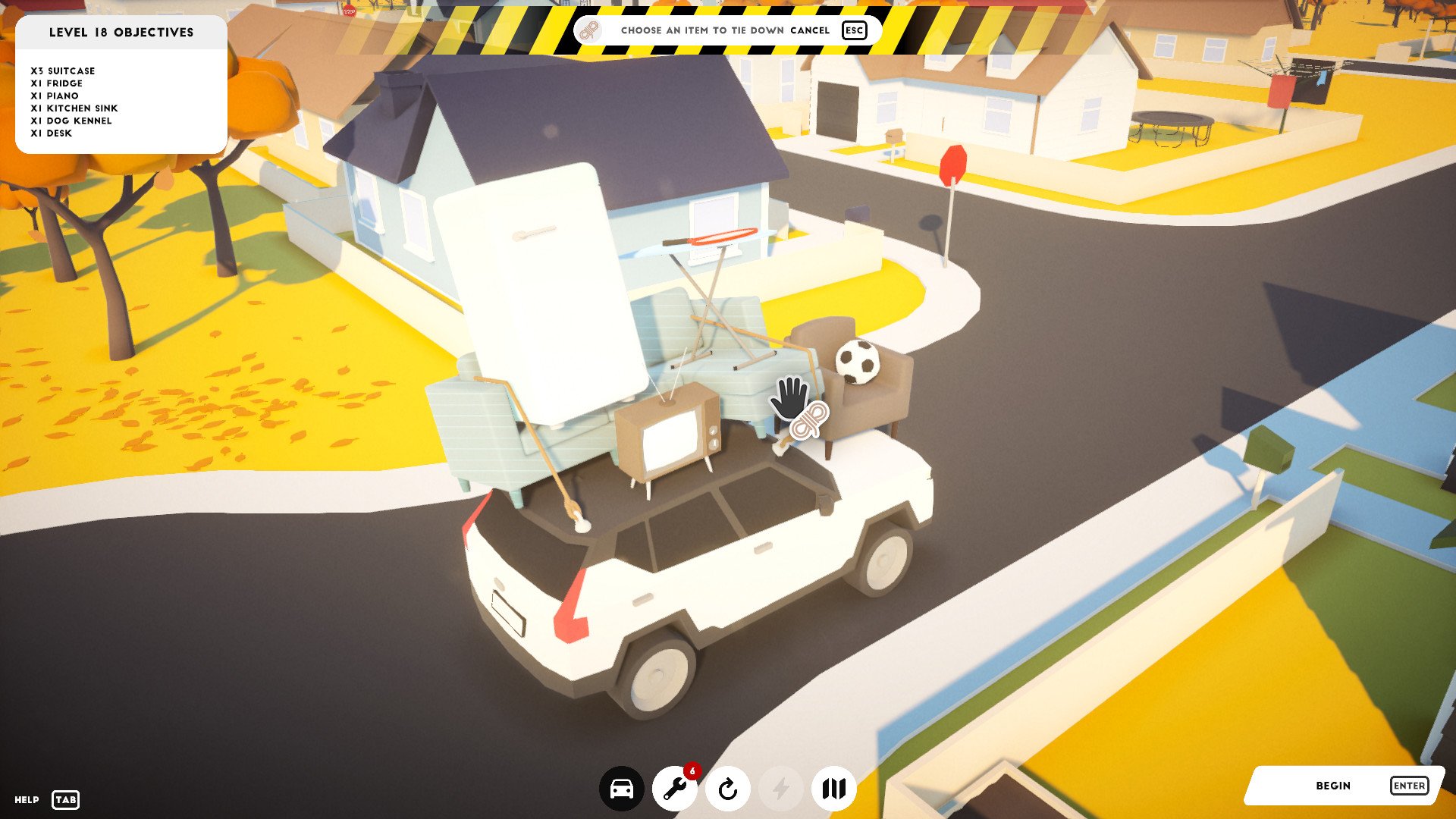 When it comes to video games I have always been a sucker for a game that tries to do something new. I love playing silly games as they are usually the games that take the most chances trying to do something new. With the expansion of the indie video game market there are too many games out there that try to do the exact same thing. This is why I have always been a big fan of games that try to do something unique. When I first saw Radical Relocation I was really intrigued because the premise just sounded like silly fun. While it doesn’t logically make much sense, the idea of having to stack items on top of your car as you drive across town just sounded like such a silly idea that was right up my alley. Radical Relocation might be the most impractical moving simulator ever created, but it finds a way to turn packing and moving into a fun and silly puzzle game experience that I had a blast playing.

In Radical Relocation you are in the process of moving in a world that for some reason doesn’t have any moving companies or trucks. Despite this you need to move quickly so it is on to the next best solution using the family car and other vehicles that are lying around to move all of your possessions. In each level you are given a group of objects that you have to stack on top of your car to move them in one trip from your current location to the destination. At first this seems kind of easy as you will only have a couple of items. The number of objects and the types expand as you progress in the game where you will eventually have to stack grand pianos, basketball hoops, soccer nets, and other objects on your car at the same time.

The objective of each level is simple, get all of your items to your destination without losing any of them along the way. Accomplish this and you can move on to the next level. This is easier said than done though. In addition to just keeping all of the objects on your car you have to avoid various obstacles that get in your way. Reaching the end is not enough as you will receive stars based on how quickly you reach the finish. This all might seem overwhelming, but the game gives you various tools to help you. This includes using rope to tie items to your vehicle, magnetizing objects so they stick to your vehicle, adding more time to reach the destination, or even attaching a trailer to carry some of the objects.

After playing Radical Relocation I would say that the genre that fits the best is probably the puzzle game. Basically Radical Relocation is all about figuring out how to stack the items on your car. You could choose to just haphazardly place items on the top of your vehicle. This will likely work for the first couple of levels, but soon after you will have to put real thought into how to stack the items on your vehicle. You need to figure out how to create the most stable stack of items along with finding creative ways to store items inside other items.

This is the area where Radical Relocation really shines. Maybe it is just me, but I found the mechanic of figuring out the best way to store objects really satisfying. There is some genuine skill to it as well. You have to put thought into how you place the objects as otherwise they will fall off shortly after you start moving. I found it to be really satisfying finding clever ways of storing objects on your car. At times this really feels like a puzzle as you try to use physics to your benefit. If you are good at stacking the objects you don’t really have to worry about objects falling off the car unless you hit obstacles or drive recklessly.

Lets move onto the driving. In many ways the driving in Radical Relocation is like any other game where you drive vehicles. So far the game has two worlds which feature different types of vehicles. You will begin by driving cars and other similar vehicles. In the second world you will be driving boats between islands. A third world is planned to be released soon where you can fly planes/helicopters. Controlling the cars and boats are simple as you just control the forward progress of the vehicle and turning. The one area where this aspect might differ from most games is that you have to drive carefully. As you have unsecured items just sitting on top of your vehicle you can’t make sudden changes while driving. This means you have to avoid sharp turns and slamming on your breaks. Avoid obstacles whenever you can as well since you likely will fail if you hit one of them. To succeed you need to take your time, but you also can’t wait too long or you won’t beat the time limits to receive stars.

As I mentioned at the beginning of this review one of the main things that intrigued me about Radical Relocation was that it seemed silly and I am a big fan of silly games that try something new. I wouldn’t say that I am disappointed, but the game wasn’t exactly what I originally expected it to be. Now there will be times in the game where you will have items teetering back and forth as you make turns. I have literally finished levels with objects in the process of falling off my car as I crossed the finish line. Depending on how you play the game though Radical Relocation is not as silly as the trailer makes it out to be. If you want you can create a tall wobbly stack and you will get a silly game with objects falling everywhere. If you carefully stack the objects and don’t drive recklessly, you can create a stack that is quite stable. If you optimally play the game you are never in too much danger of objects falling off the vehicle. This is not necessarily a bad thing as the game is still quite enjoyable even if it is not quite what I was expecting. Those that are looking for a really silly experience may be a little disappointed though.

The biggest problem I had with this is that I honestly found Radical Relocation to be kind of easy. I will preface this by saying that maybe I am just really good at finding creative ways to stack objects to take advantage of the physics. Outside of maybe a couple of levels I never had any significant issues with any of the puzzles. I was able to finish many of the levels on my first attempt. This was without even using the special abilities. It is not that hard to stack many of the objects inside storage areas like a truck bed. There are even times where you can use two items together where they hold each other firmly in place. In many levels I was able to create a stable enough stack that there was no worries about objects falling off unless I was reckless. I will admit that I haven’t finished all of the levels yet (I have around six levels for both the cars and boats left to do), but I don’t see the last couple of levels being significantly more difficult than the levels that I have already beaten. The game being easy is not necessarily bad, but I wish it was a little more challenging at times.

The only other issue I had with the game is that there are some occasional bugs/glitches. The game crashed once while I was playing and there where a couple other bugs from time to time. There was also a decent amount of graphical glitches where there was some small flickering spots at times. The biggest issue is that the stacking controls can be kind of finicky at times. The controls are really simple to use and work well. The problem is it can be kind of finicky when placing certain objects. To place an object the item has to show up as green noting a valid location to place the object. You are unable to place an object if you don’t place it in a valid location. The problem is that at times there are only very specific places that you can drop items where if you are off by even a little amount you can’t place the object. This means that at times you will have to spend quite a bit of time finding the perfect spot so you can place an object where you want to place it.

As I mentioned earlier I haven’t completed the entire game so I can’t give you a definitive length for the game. At this point the game has three different modes. The main part of the game is the levels. Currently the game features both the car and boat worlds with a plane/helicopter world coming soon. The car world features 30 levels and the boat world has 20 levels. So far I have finished 37 of the 50 levels and it has taken me a little over four hours. If the rest of the levels take around the same amount of time I would guess they would add another hour to an hour and a half to the game. Along with the levels there is a weekly challenge where you are given a task with certain conditions. You try to complete this challenge in the least amount of time to place high in the world rankings. Finally the game has a free roam mode where you just drive around the different maps. I am not exactly sure what this mode is used for outside of maybe completing some of the achievements or finding hidden locations. With Radical Relocation retailing for $10 I think the amount of time you will get out of the game is well worth the cost.

Radical Relocation is not exactly what I initially expected it to be. The basic premise of the game is that you have to move a group of objects to another location while only being able to place them on top of the vehicle that you are driving. I thought this was the perfect premise for a silly game as you made huge stacks of items that would constantly fall off your vehicle. You can play the game in this way if you want, but if you play optimally Radical Relocation becomes a puzzle game. The game is all about finding the best way to use physics to have the objects support one another to create a stable stack. The gameplay is really satisfying as it is fun finding ways to manipulate the physics to create a stable stack on top of your vehicle. This does lead the game to be quite a bit easier than I expected though. The game requires some planning, but if you are good at stacking the objects it isn’t that hard to get all of the objects to their destination easily within time. The game also has a few bugs/glitches, and placing the objects is sometimes a little harder than it needed to be. Radical Relocation is still a great game though that I really enjoyed playing.

My recommendation for Radical Relocation is pretty simple. If the premise of trying to stack random objects on top of your vehicle to transport them doesn’t sound all that interesting, the game won’t be for you. Anyone who thinks the game’s premise sounds interesting though should really enjoy Radical Relocation and should consider picking it up.