How to Play Abalone 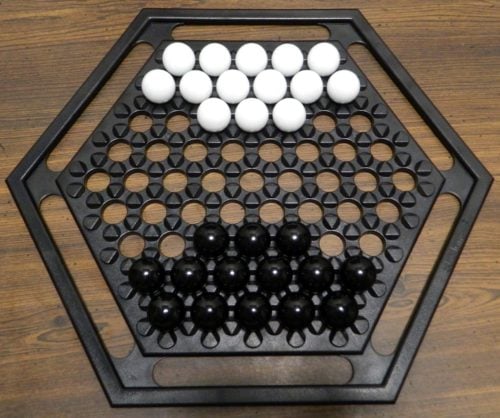 On a player’s turn they will have the opportunity to move one, two or three of their balls that touch one another. The balls can be moved in one of two ways.

First a player can move balls in-line where all of the balls are moved in the direction of the line that connects them. 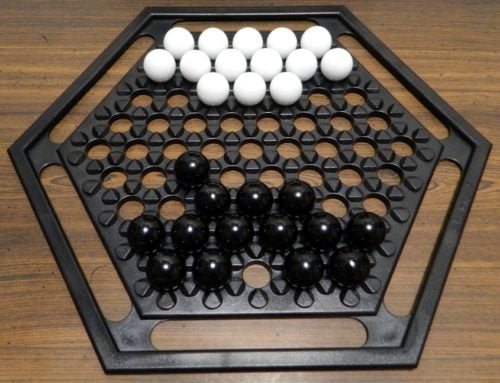 The black player has pushed one of the balls from the back row along with the two balls above it one space forward.

Otherwise players can move balls broadside where the three balls are moved in the same direction, but in a parallel direction to where the balls were previously. 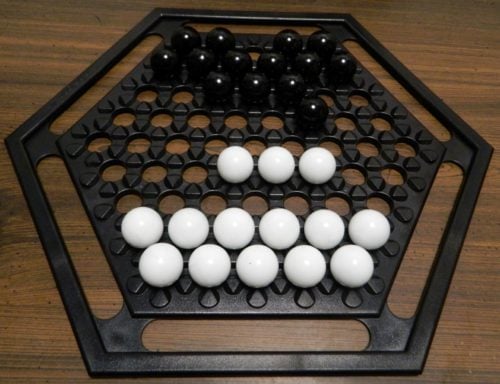 The white player has made a broadside move by moving three adjacent balls one space forward.

After a player makes their move play will pass to the other player. 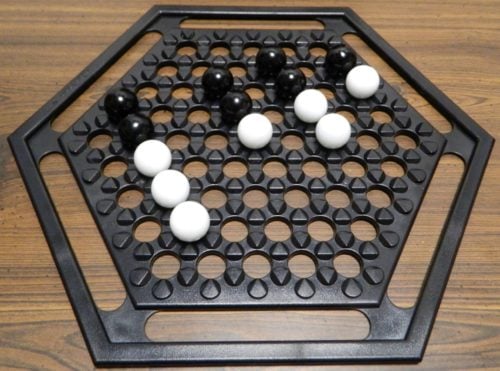 When a ball is pushed off the board and onto one of the racks along the sides of the board it is eliminated from the game.

The game ends when one player successfully pushes six of the other player’s balls off the gameboard. That player will win the game. 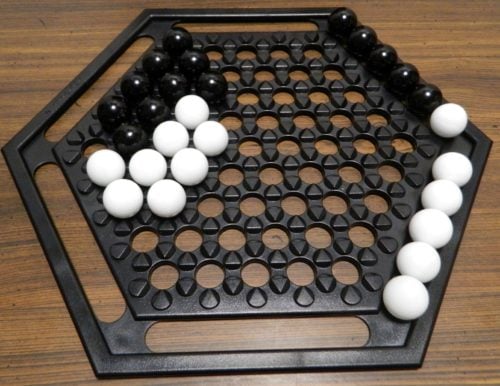 The black player has pushed six of the white player’s balls off the board so they have won the game.

My Thoughts on Abalone

One of the more popular ways of describing Abalone is to call it the sumo abstract strategy game. At first this comparison seems kind of odd, but when you truly think about it there is a lot of truth to the comparison. Like sumo wrestling the key to the game is to push your opponent’s balls out of the ring. The first to push six balls out of the ring wins the game. To accomplish this players take turns moving one to three of their balls in the same direction. When a player has more of their colored balls in a line than the other player they can push the other group. Players need to use this to their advantage to push the other player’s balls off the board.

If this sounds really simple it should as Abalone is surprisingly easy to play. The game has a recommended age of 7+, but I think children even younger could play the game. They likely won’t understand all of the game’s strategy, but the mechanics are simple enough that I can’t see too many people not understanding how the game is played. I was genuinely surprised that the gameplay was quite a bit more straightforward than I expected. The objective of pushing the other player’s balls off the edges of the board is so straightforward where you always know the objective. In my mind this makes the game considerably more accessible than many abstract strategy games where it takes several games to truly understand what you are trying to do.

Abalone may be simple to play, but it also relies on quite a bit of strategy. As an abstract strategy game there is little to no reliance on luck in the game. Outside of hoping the other player messes up, your fate in the game is entirely up to the moves that you make. I am far from an expert at Abalone, but there are plenty of strategic options in the game. It is the type of game that will take many games to master which is shown by the game having a pretty active tournament scene where a champion is crowned each year. You can start forming your own strategy pretty quickly though. To do well in the game you need to do a good job balancing offensive and defensive moves. When you have the opportunity to remove one of the other player’s balls you should consider taking it, but you don’t want to put the rest of your formation at risk. The player that makes the best moves and avoids mistakes is almost always going to win the game.

As for the length I would say that it depends. Part of this is due to the game’s fatal flaw regarding stalemates which I will get to later. If you can avoid the stalemate problem though games should move pretty quickly. Each move in the game could theoretically take just a few seconds. Turns will likely take a little longer than that, but if players don’t spend too much time considering their options the game should move pretty smoothly. Like all abstract strategy games though Abalone has the potential for analysis paralysis. If players want to analyze the pros and cons of every potential move a turn could take quite a bit of time. Unless you are an expert at the game though you are probably better off spending a little time considering your options and then just picking one. I could see the game getting a little dull if the players have to carefully analyze every option.

It will depend on which version of the game that you play (there have been quite a few different versions created over the years), but I thought Abalone’s components were quite good. The components are pretty simple as you just get the balls and the gameboard. The components don’t have the flair of other games, but they work well for the game. The balls are quite heavy which adds a real weight to the game. Added to this is the gameboard which is designed where you can easily move balls into neighboring spaces. The noise when balls move between spaces is so satisfying.

With the success of Abalone there have been a number of spinoffs/sequels. Most of these just add additional players to the game. I am kind of curious how adding additional players to the game would alter the gameplay. It would definitely change the game’s strategy, but I would be a little worried about players ganging up on another player. One of the spinoffs that kind of intrigues me though is Offboard

. It looks like the unofficial sequel to Abalone as it was designed by the same people and features the same basic gameplay. The one major difference is the addition of different scoring zones. This sounds interesting as players need to try to target specific areas for where they push off the other player’s balls.

Generally I have pretty mixed feelings about the abstract strategy genre. I have played very few that are terrible. This is mostly because they only have a couple mechanics so they are refined to the point that those mechanics aren’t broken. At the same time I have played very few that I would consider great. Most games end up somewhere in the middle in my opinion. This does a good job describing my opinion of Abalone as well. The game is far from bad, but it has some issues which I will get to shortly. I had fun with the game and I would probably consider it one of the better pure abstract strategy games that I have played in a while. Fans of abstract strategy games will likely really enjoy it. If you have never cared for the genre though there is nothing about the game this is likely to change your opinion.

The biggest issue with Abalone is something that has been known for years. Following the official rules the game has one potential fatal flaw. Basically the key to winning the game is to play as defensively as possible. Generally you are better off letting your opponent attack first because you can then turn that against them to get an advantage in the game. It is actually possible to create a formation in the game where it is literally impossible for the other player to ever be able to push any of your balls. Strategically both players are better off playing defensively as unless the defensive player makes a mistake the offensive player will always be put into a disadvantageous position. If both players play defensively the game can turn into a stalemate where the game will only end when one player gives up or makes a mistake due to the exhaustion of the game never ending.

This is a well known issue with the game. If you play Abalone in this way the game is not going to be that enjoyable. Over the years fans of the game have tried to create a number of different ways of eliminating or at least minimizing this issue. Many of these solutions involve setting up the balls differently to start the game. These formations are supposed to encourage players to play more aggressively. I didn’t try out any of these different formations, but they are supposed to help with the issue. The other solution which is generally preferred for most tournament play is just forcing both of the players to play aggressively. Apparently in Abalone tournaments a player can be penalized for playing too passively. The game is much more enjoyable if both players are forced to play aggressively. The problem is without a impartial judge it is hard to make sure neither player reverts to playing passively. If you have two really competitive players this is likely to happen as you will gain an advantage in the game by playing passively.

Should You Buy Abalone?

In many ways Abalone feels like your typical abstract strategy game. The game has absolutely no theme as it is focused entirely on the game’s mechanics. I was genuinely surprised by how easy the game is to play as you basically move groups of balls around the gameboard trying to shove the other player’s balls off the board. The game may be easy to play, but it still has plenty of strategy as your success relies almost entirely on the moves that you make. The game does have one fatal flaw though. You generally are better off playing passively. If both players do this though the game can easily become a stalemate. In order to fix this problem and actually enjoy the game players have to agree to play aggressively. At the end of the day Abalone is a solid/good abstract strategy game that is probably one of the better games that I have played in the genre.