Originally airing in 1973 as the $10,000 Pyramid, the Pyramid series of gameshows has been on American TV off an on for 44 years . The basic premise of the show is that there are two teams of players. The gameplay involves having one player describe a word to their partner in a way that the other player can correctly guess the word. Just like with most popular gameshows, the popularity of the TV show led to at least ten different versions of the board game being released through the years. The Pyramid: Home Game ends up being a good board game adaptation of the gameshow but fails to really do anything original.

How to Play Pyramid: Home Game 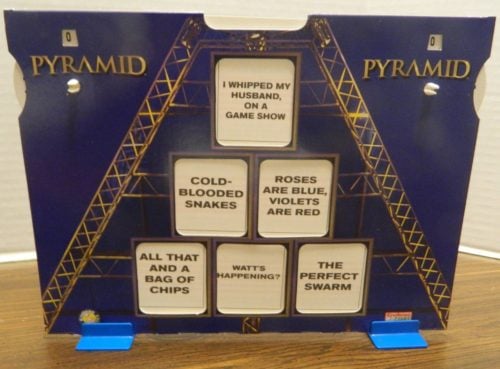 For this game the players will play the categories listed on the pyramid.

The player giving clues will reveal the category that relates to all of the words. The other team then turns over the timer and the round begins. The player giving the clues tries to get the other player to guess the words on the card. The player can use almost any type of clue in order to try and get the other player to guess the words. The only restrictions on clues is that you can’t use any versions of the word that the player is trying to guess and you can’t say that the word rhymes with another word.

If either of the players don’t think they will be able to guess the word, they can pass on the word and move onto the next word. They can retry a passed word if there is still time left when the player has finished with all of the other words.

When the timer runs out the players count how many of the words they correctly guessed and write it down. 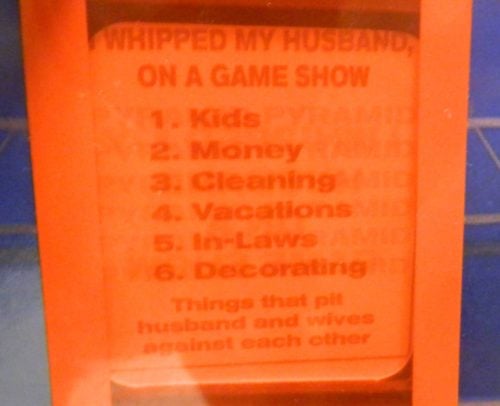 For this round the category is things that pit husbands against wives. The team will score one point for each word that the guessing player is able to guess. 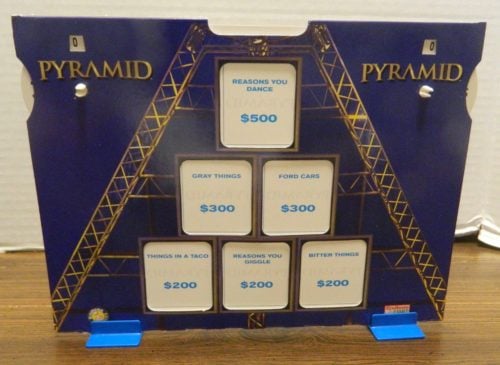 If the team guesses all six categories before the timer runs out, the team wins the max amount of money. If the team does not guess all of the categories, they earn the money corresponding to each category they guessed correctly. The two teams will then compete in another game to see who goes to the Winner’s Circle for the second game.

The game ends after two rounds. The team who has earned more money in two rounds wins the game.

My Thoughts on Pyramid: Home Game

I have already mentioned that there has been at least ten different versions of the Pyramid: Home Game created in the past. With so many different versions of the game and very few differences between each version of the game, I thought it was just easier to review the entire franchise at the same time instead of taking the time to look at each version by itself. While I ended up playing the 2003 version of the game, this review will cover all of the games from the franchise.

As far as my opinion on the gameshow I have always seen it as a very solid but unspectacular gameshow. It isn’t my favorite but I don’t have any problem watching it if there is nothing better on. Basically my thoughts on the board game are pretty similar. The game is very solid but unspectacular. I had fun with the board game but it is not something that I would play very often.

Being based off of a gameshow it is not surprising that the Pyramid Home Game is pretty easy to pick up and play. If you have any familiarity with the gameshow it should take a couple minutes at max to learn how to play the game. The only thing you really need to pick up are a couple tweaks to the rules that were made in order to adjust the gameshow to the board game. For people who are not familiar with the gameshow it may take a while longer but I don’t see any potential problems teaching the game to a new player.

While Pyramid is quite easy to play, I have to say that I was a little surprised by how difficult it is to get all of the answers in a round. Having seen the gameshow I have always thought that the game looked quite easy. In most circumstances it shouldn’t be that difficult to come up with a definition that would make most words pretty easy to guess. After playing the game though the time limit does seem to affect you more than you would think. The most words anyone got in a head to head round was five out of six while the most anyone got in the Winner’s Circle was four.

I didn’t do as well in the game as I was expecting but I think Pyramid is the type of game that you will get better at the more you play it. I doubt many people will be able to get all of the words in a round without some practice. This means that the more you play the game, the more you will be rewarded. A team that is more familiar with the game is going to have a big advantage over a team that hasn’t played the game very much. This means the game might not be very competitive between two teams with different levels of experience.

Just like with most board games based on gameshows, the Pyramid Home Game franchise has some occasional problems with some categories being easier than others. It might somewhat depend on the group but it just feels like it is much easier giving clues for some words over other words. If one team is significantly better at the game than the other team this difference in difficulty is probably not going to make a difference in who wins. The difference in difficulty is going to show up though if two equal teams face off and one team has more luck with category selection than the other team.

Should You Buy Pyramid: Home Game?

While it seems pretty obvious, Pyramid: Home Game is basically what you would expect out of a board game based on the television show. Outside of a few slight tweaks the board game is basically the gameshow in a board game format. Not having strong feelings either way about the gameshow, I found the board game to be solid but far from spectacular. I had some fun with the game but I don’t really see it as a game that I would come back to very often. The game has issues with some categories being easier than others and the game could have included cards for more games. If you really like the gameshow though I can’t imagine you not enjoying the Pyramid: Home Game franchise of board games.

If you would like to purchase the Pyramid: Home Game you can find it online: $10,000 Pyramid Second Edition (Amazon)